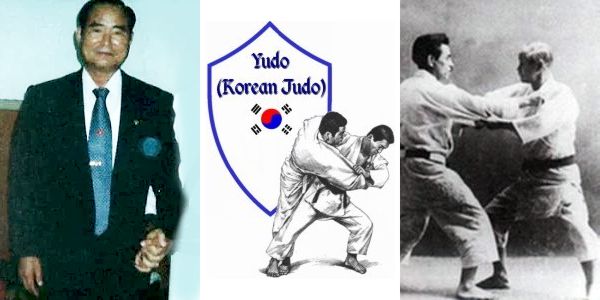 Archaeologists have shown that cultural and technical advancement came to Korea through China. In turn, these advancements were later taken to Japan from Korea. Such advancements included unarmed combat techniques.

It is no surprise then that Korea has a rich martial arts history that includes all types of fighting skills. Though many people are familiar with Korean-style kicking and punching, most are not aware of Korean strangling, joint lock, or throwing techniques. They may not even know that the Koreans have complete unarmed fighting systems. Yudo is one such system.

During Korea’s Three Kingdom Period, the Silla Kingdom (57 B.C. to 937 A.D.), developed specific throwing techniques for their Hwa Rang Do Warriors. Throwing techniques were also found in Taik Kyon, which could be considered Tae Kwon Do’s predecessor. A primary throwing system, Kagju, was practiced in the Koryo Kingdom (918 A.D. to 1392 A.D.).

Many of the specifics of these techniques (but not all) would end up being lost to martial art historians. Many of them would later surface, however, in the various styles of Jujutsu in Japan.

Ironically, a complete unarmed fighting art would be reintroduced to Korea from Japan, by Jigaro Kano, after the Japanese occupation of Korea, shortly before the First World War. Jigaro Kano called his art Kodokan Judo, and it was a martial art based upon the application of scientific principles. A system specifically designed for self-defense.

Professor Kano was a distinguished educator and the Father of Physical Education in Japan. His martial art was unique in that it contained a self-defense system that allowed people to practice safely, in a form that could be taught easily as part of the public school curriculum.

His intent was never to have Kodokan Judo practiced as or modified into a sport. It is said that later in his life, Professor Kano witnessed a sport judo tournament and was dismayed at the lack of his applied scientific principles. Sport judo had basically become a contest of strength and resembled wrestling, instead of his martial art. Professor Kano was quoted as saying: ‘This [sport judo] is not the Kodokan Judo that I teach, this will be the end of Kodokan Judo.” Little did he know then, that he was foretelling Judo’s future. Judo today is almost universally practiced as a sport, not for the purpose of self-defense — except within the Republic of Korea (ROK) Yudo Association.

Yudo is the Korean pronunciation for Judo and some Koreans, both in ROK and in this country, tend to use the two terms interchangeably. Sports judo has flourished within the Republic of Korea and Korean sports judo players have distinguished themselves on the international tournament scene and in the Olympics. As is increasingly the practice however, I shall herein refer to Judo as referring to sports judo, Kodokan Judo as the teachings of Jigoro Kano, and Yudo as that form of self-defense which encompasses all of Kodokan Judo and incorporates additional traditional Korean martial arts techniques.

Jigoro Kano’s teachings are the basis for the practice of Yudo within the Republic of Korea Yudo Association (ROKYA). Those teachings were reinforced and developed for the Korean practitioners by the teachers sent to the Korean Peninsula, from the Kodokan, during the occupation. The ROKYA have remained loyal to what they were taught by Kano, even when, during the Occupation of Japan following its defeat in World War II, all martial arts training halls were ordered closed, and when the Kodokan itself was allowed to re-open, it did so as a sport training center.

After liberation in Korea, the martial arts flourished, as ancient manuscripts were dug up from the ground in which they had been buried, hidden from the Japanese. Sport judo became very popular among the young, while the ROKYA remained loyal to its core teachings and began to reintroduce traditional Korean techniques to enhance its self-defense applications.

Yudo has no attack. The size of the attacker has no bearing on the ability of the defender to receive the attack, execute a technique, and satisfactorily terminate the incident. Since the student learns that the response chosen, in a given instance, must correspond to the nature of the threat encountered, minimum required force becomes the fighting standard.

This approach to self-defense inherently conforms to the American legal doctrine as it applies to use of force, and confronts the growing public concern with the level of violence demonstrated in many contemporary martial arts.

In time, sports judo outgrew it roots. Various sports judo organization were created to govern in the schools, colleges, universities, among the military and general public, and among the international and Olympic competitors.

By the second-half of the 1990’s, the greying of the ROKYA had reached the point of serious concern, that traditional Yudo might be lost to future generations. It was time to transplant traditional Yudo, if the art was to be guaranteed survival.

In 1997, two senior Dans in Yudo, both Americans, were created by promotion certificates personally signed by Kim Chul Ho, then President of the ROK Yudo Association. In February 1998, the United States Yudo Association (USYA) was incorporated and in April 1998, formal approval was given for the installation of the USYA as the National Governing Body in the United States for the martial art of Yudo by the Yudo Committee of the Korean Martial Arts Instructors Association (KMAIA), a committee chaired by the new President of ROKYA, Lee Hwe Yul.

At the same time, approval was given for the rank requirements and the Yudo curriculum which had been proposed to the ROKYA by the USYA.

At a ceremony held in Seoul, Republic of Korea on November 1st, 1998 Grandmaster Joseph F. Connolly, II, was promoted to 9th Dan in Yudo by Grandmaster Lee Hwe Yul, President of the ROK Yudo Association.

It is the intention of the USYA that the memory and teachings of Jigoro Kano be kept alive and that Yudo, now a uniquely Korean martial art, become the martial art for the coming millennium in the United States.