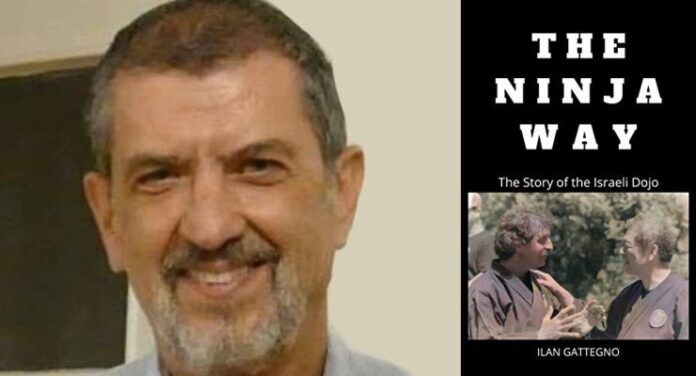 While writing the upcoming book “It Takes a Ninja,” Ilan Gattegno realized that many of his published writings on the Bujinkan were no longer accessible to his fellow practitioners. He felt it important to share the contribution of the Israeli Dōjō to the understanding of Bujinkan spirit in the world. Many people were exposed to Doron Navon, instructor of the Israeli Dōjō, but only through his translating for Hatsumi Masaaki. This book tells the story as Gattegno experienced it since beginning training in November 1974 when Doron returned to Israel after spending eight years in Japan.

Included are these chapters – The Connection: Israel on the Map, Takamatsu: The Teacher of Todays’ Ninja Leader, Hatsumi Masaaki: The Enigma Continues, Doron Navon: The Test of Truth, Ishizuka Tetsuji: A Close Up on a Master Instructor, Nagato Toshiro: The Gentle Giant, Next Generation: Teaching the Art, Watch and Learn: Licensed to Drive, The Requirements: Setting a Standard, Seigyo Through Metsubushi: Control through Blinding, Working for the Future: Letting Go, Back to the Hombu Dōjō.

Dai-Shihan (大師範) Ku-gyo Menkyo / Ju-godan (十五段) Ilan Gattegno, a published author and a journalist, joined the Bujinkan in November 1974, when Doron Navon returned to Israel after eight years in Japan. During the first few years at the Israeli dōjō he was assisting Doron in his classes by taking over the classes in Doron’s absence. Together they formed the Bujinkan Israel association with Doron as Chairman and Ilan as Secretary. In 1975, Ilan joined the Tel Aviv University jūdō Team and in 1976 was Captain of the team, which won the Inter-University Cup that same year. He was then presented with the Sportsman of the Year Award at Tel Aviv University. In 1980, he traveled to Japan for a month and studied with Ishizuka shihan and Tanemura shihan, and met Hatsumi sensei who, at the time, was not teaching. He also practiced jūdō at the Kōdōkan in morning classes held for foreigners. In 1983 he led the Israeli delegation to the first gasshuku [training camp] in Yumoa-Mura.
Ilan’s magazine and daily paper articles were an immense contribution to the publicity of Bujinkan. His articles in Black Belt and Ninja magazines brought a huge amount of attention to the true nature of Bujinkan.

In 1983, he received Shidoshi-ho title while in Japan and has been teaching ever since. He has also travelled abroad extensively and helped form some of the most prominent clubs today.

In 1987, in the Tai Kai in London, he passed the godan test. In 1989 he was in the organizing body of the Jerusalem Tai Kai and also arranged the 1992 Tai Kai at the sea of Galilee. When Doron Navon decided to let the next generation take the lead in Bujinkan Israel, Ilan helped Moti Nativ regroup all the teachers and students in Israel and organize the first and the second Teaching Courses, under the guidance of Wingate Institute of Physical Education.

Jerry E Fisher No Regrets, The Life of an American Martial...