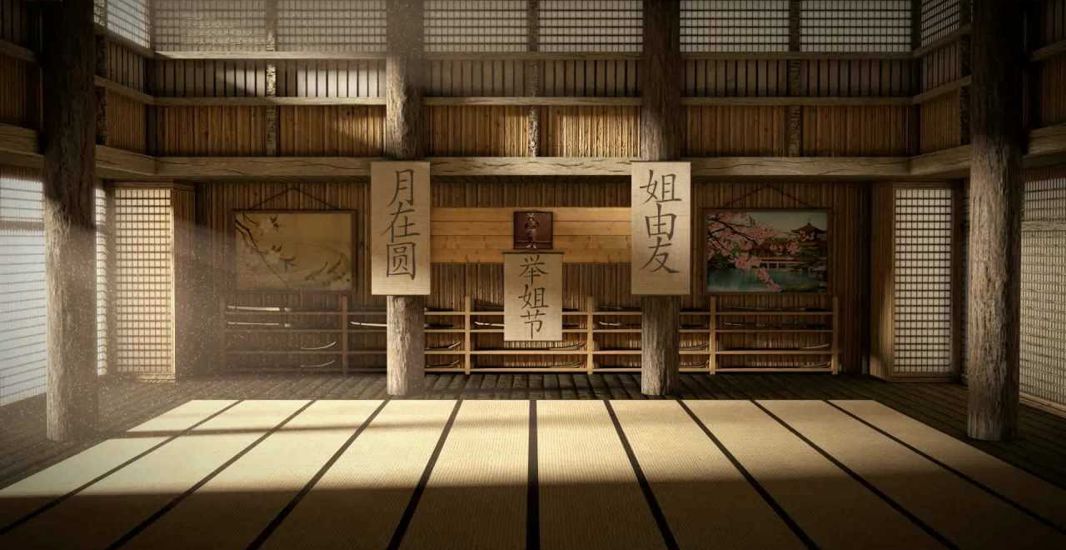 This is not an attempt to give either a history of Buddhism or Zen-Buddhisms  arrival and its impact on Japan. It is only meant to be a very brief outline on  the term Dojo and from where it derived. So bearing that in mind, I ask  any readers to have mercy upon my attempt at such an over intricate subject.  However to give some understanding of the term Dojo and its implications to  Japanese Martial-Study, a little knowledge of the arrival of Buddhism and  Zen-Buddhism to Japan is necessary.

In the mid 500 (AD,) when the Korean King of Paekche was warring with the  King of Silla, he sought to ally himself with Japan and sought military  support for his campaign. To this end he presented the Emperor of Japan with  some sacred Buddhist scriptures, and described Buddhism as the religion of the  civilised world. The Mononobe Clan who led the Imperial army, opposed  supporting the Korean, so to did the Nakatomi Clan; their united  opposition also included the importing of Buddhism into Japan. They believed  that it would be an affront to Shintoism, also it was the duty of the  Nakatomi clan to perform the Shinto religious rituals at the Emperors court and  it was thought by the Nakatomi family that Buddhism would contradict there  authority.

The Emperor doubted the wisdom of adopting Buddhism into Japan but allowed the Soga Clan, who were rising in political power, to practice Buddhism in  private on a trail. The Nakatomi and Mononobe had great success in  the spreading of hostility against Buddhism and the outbreak of an epidemic at  this time was seen as a sign of the anger of the Shinto gods. The Sogo  temple at the palace was burnt down. However a few more Buddhist monks arrived  from Korea adding to a very small Buddhist Community at the capital. After  centuries of turmoil and the rising and falling of Clans, murders and intrigue  of every possible dimension, Buddhism and Shinto learnt to coexist. The Form of  Buddhism that would emerge is referred to as Pure Land Buddhism however  there where no shortage of rival schools of thought, all contending with each  other and with no shortage of violence from the Buddhists sects.

Another Form of Buddhism that developed in Japan was called Zen, Zen originating  from China where it was called Chuan. Zen was psychological as was the  original teachings of Siddhartha Gautama. Rather than having a mission in  life the adherent was encouraged to live existentially, without anxiety and with  self reliance.

The first Zen  temple was completed in 1205, at  Kamakura  by the Japanese Monk Eisai who, although having been driven from  Kyoto  15 years previous, now, at  Kamakura,  had the patronage of the military. Zen was very appealing to the Samurai who  soon mixed it with there own values in a way that was alien to Chuan Buddhism  its emphasis on focussing the mind and physical discipline was similar to the  discipline used in Martial training.

Clan Lords advocated Zen for their Bushi, Zen monks and  monasteries where patronised and soon proliferated. The Zen Bushi viewed  life as an illusion, with no past or future, killing was no worse than any other  activity and dying was nothing. These ideals would develop into the fusion of  Buddhism, Taoism and Shinto and be known as The Way of The Warrior – Bushido.

Such was the zeal by the Bugi for Zen, that they began to congregate  around and attach themselves to Zen temples and conducted martial practice. The  numbers soon became troublesome, with many being itinerant or masterless. Clan  Lords who had always had set aside places for their troops to practise (Geiko)  created or gave permission for specific areas to be used for what was now  referred to as Place of Study and Enlightenment. That study and enlightenment  was Martial.

DOJO comes from the original Buddhist Sanskrit Bodimandala, the Dojo went  through a period of changes from rough to polished and from polished to  esoteric.

In traditional Dojo, the four sides of a dojo have names and function. The  central location is the Kamizaimplying upper seat; it is the place of  honour. Opposite the Kamiza is the Shimoza or the lower seat;  during ceremonies instructors and students are assembled in rank along this side  of the Dojo. When facing theKamiza the right side of the Dojo is called  the Joseki or upper side, the left side is the Shimoseki or lower  side. Students when receiving instruction line up along the Shimoseki and  the instructors face them from the Joseki.

Today our Dojo are more likely to be in a sports centre or community hall, but that is also true in the Japan of today. However there still exists in Japan, old and venerable Dojo, whose polished floors have felt the weight of  centuries of practitioners. However a true Dojo need not be even a building but it does need to be a place where the Dojo Formula is used and adhered to; the  four sides of the Dojo where not just given names for esoteric reasons, for  there was no room for the esoteric or the fanciful in an age where ones life was  less than the length of a sword blade.

There is no shortage in Japan and indeed the rest of the world of what are  termed Dojo. The problem is to distinguish which is a Dojo that meets the Dojo  Formula criteria, and which is little more than money making machine for the  gullible! Yes the Dojo business is truly into the 21st Century with  every country, including Japan, having their version of WEKONYOU RYU.

When I see some of these syndicated and franchise Dojo the term ego massage  parlour comes to mind. Thankfully however, there are in our country, some  excellent professional Dojo and with instructors of the highest calibre.  But how they must feel swamped by the professional marketing ploys of the  WEKONYOU RYU.

Speaking of the famous WEKONYOU RYU reminds me to do a little more work on my  essay entitled SOKES and SMOKIES!

Sensei – The Origin and Meaning Word

David Stainko - December 13, 2016
We use cookies to ensure that we give you the best experience on our website. If you continue to use this site we will assume that you are happy with it.OkRead more