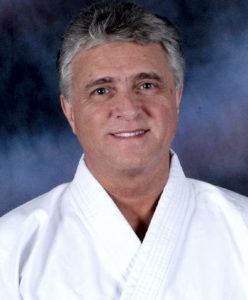 Tony Annesi has studied martial arts since 1964 and has received Black Belts in judo, aiki-ju-jutsu, and karate. As early as 1977, Tony Annesi received the title Ichiban Deshi no Soke (#1 student of the stylistic leader) in aiki-ju-jutsu from Shihan Albert C. Church, Jr., inheritor of the Shorinji Tetsu Ken Kamishin-ryu.

In 1984, the Goshin-kai International, a French federation, and the International Brotherhood of Martial Artists, a German-based organization, both decorated Tony Annesi for his dedication to the martial arts.

Tony Annesi wrote a column entitled Tales of the Dojo that later became The Dojo Files for INSIDE KARATE MAGAZINE and for MARTIAL ARTS MASTERS. Tony Annesi has written for SELF-DEFENSE WORLD, INSIDE KUNG-FU, THE INTERNATIONAL FIGHTER, and BLACK BELT, as well.

Tony Annesi has authored the official karate and aiki-ju-jutsu manual series for BUSHIDO-KAI KENKYUKAI and is the author of the privately published Cracking the Kata Code, The Road to Mastery, Principles of Advanced Budo, Sudden Attack Defense, Elevated Elementals and Comparative Aiki in Action. Buy Books by Tony Annesi on Amazon

In 1984, Tony Annesi was appointed soke-dai (inheritor-designate) of the Kamishin-ryu martial arts and the KAMISHIN-KAI INTERNATIONAL. In the fall of 1986, Annesi earned the title of shihan-renshi (master instructor). In 1988, due to a conflict in leadership styles and goals, Annesi resigned from the KAMISHIN-KAI. He is currently chief officer of BUSHIDO-KAI KENKYUKAI, an organization dedicated to the development of traditional martial arts in the modern world and specifically of TAKESHIN SOGO BUDO (a teaching method comprised of TAKESHIN AIKI, TAKESHIN KARATE, and TAKESHIN SEIKEN BUDO) administrated from its BUSHIDO-KAI HOMBU DOJO in Ashland, Massachusetts.

Tony Annesi offers seminars in aiki, karate and seiken budo worldwide, and is the director of BUSHIDO-KAI BUDOYA at 300 Eliot St. #369, Ashland, Massachusetts, which markets martial arts videos, manuals, and other educational materials. He has taught all over the USA, and in Canada, France, Denmark, Germany, and Australia.

Jim Harrison the Voice of Truth About Martial Arts