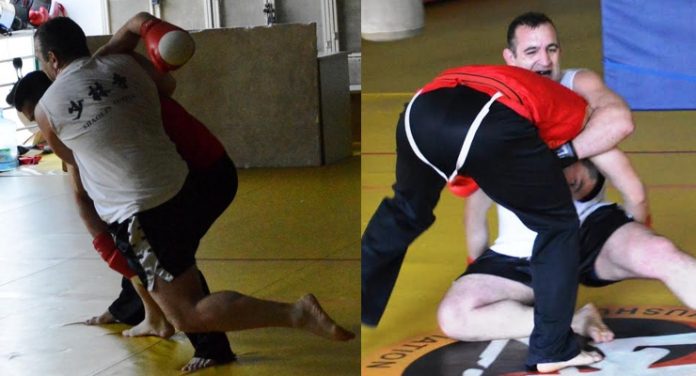 It’s no secret that MMA in the US is dominated by former wrestlers. In fact, 8 of the 10 current UFC champions are former collegiate or high school wrestlers. In China, MMA is dominated by san da fighters. MMA in China pays a lot better than san da, which attracts a lot of fighters, even if they lack the ground skills. One reason there haven’t been a lot of Chinese fighters in MMA outside of China is because China MMA pays better than anywhere else in Asia, at least for beginners and journeymen.

Before coming to China to study san da and wrestling, my thought was that, if you stay on your feet with a san da fighter in an MMA fight, they will head-kick you and knock you out. They have very tricky kicks. They are lightning fast and incredibly strong. Also, the pros have serious experience. China is a bit like Thailand, where you have guys in their early twenties who have already had 40 fights. There are san da fighters who grew up in Tagou, Shaolin Temple school or in one of the many sports schools, who have been training over ten years by the time they turn eighteen.

Before coming to China I believed the way to win against a san da fighter in MMA was to take him to the ground. The problem I identified, however, was that san da also includes throws, so the experienced san da fighters have good takedown defense. Now that I have been training in China for nearly a year, and had a chance to fight, spar, and wrestle with a lot of san da guys (although, admittedly, not the top tier guys) I still agreed that the way to beat them in MMA is to take them down. As for the second part, about them having good takedown defense, that is true, but only in san da rules.

In san da, you can only clinch or attempt a throw for about three seconds before the referee will separate you. So, in my first many months here, I found that if I just hung on the guys, and hung on them, forcing them to carry my weight and defend the takedown for ten, twenty or thirty seconds, I could eventually wear them down. At some point, you will feel their strength leave them, and you can complete the throw. In MMA, however, you need to be careful when employing this strategy, because they could be hitting you with knees and elbows while you are waiting for them to fall.

What I have decided in the last few months, since my wrestling has improved, is that the san da fighters only have takedown defense against san da throws. While san da does allow body lock throws, throws from the clinch and throws employed as part of an attack, 80% or more of throws in a san da fight come from catching the opponent’s kick and then sweeping or tripping him. One of the things that made UFC fighter Cung Le such a unique and successful san da fighter was that he fully utilized his collegiate wrestling skills in the san da ring. Cung Le was famous for using body locks, as well as suplex wrestling throws. These are techniques that most san da fighters have no answer for. Because 80% of san da throws are related to catching kicks, 80% of the san da takedown training is also dedicated to the kic- catching throws.

At Shanghai University of Sport where I train, we have never worked on any of the san da throws that are unrelated to kick catching. When I trained at Shaolin Temple, we learned a double-leg takedown and a body lock, lift and toss throw. But that was it. And we didn’t practice them that much. Most of our time was spent doing catch and throw drills.

Once again, my experience may not be typical of everyone who studies san da, but even if we allow an error margin of 20%, we can still see that most of san da grappling training is related to catching kicks.

Someone once said rules made styles. And now that I am constantly switching codes of fighting, I can agree. Last year, for example, not counting matches that were part of our university wrestling training, I had 7 amateur fights: 3 san da, 2 MMA, one boxing, and one wrestling. My wrestling team at the university specializes in Chinese traditional wrestling but we also cross train in freestyle wrestling, including doing internal matches in both styles. With the exception of boxing, all of the fights involved some wrestling, but they all had different rules. Different rules will force you to employ different techniques.

The first difference between san da wrestling and freestyle or MMA is, as stated above, the time difference. In a san da fight, a san da fighter only has to defend the takedown for about 3 seconds. That is a lot different than having to defend for ten or more seconds in wrestling and virtually unlimited in MMA. Even with the kick-catching throws, the ones where the san da fighters have the most experience and skill to avoid the takedown, they are only used to hoping around on one leg for three seconds. Try hoping around on one leg for twenty seconds while someone your same weight is trying to pull you down. The time factor is a game changer.

Another important factor is what I like to call the do-or-die factor. In san da, if you throw your opponent you can get one, two, or three points. And points are nice, but they aren’t worth dying for. In MMA, if you are a grappler, getting your opponent to the ground may be the difference between winning or losing the fight. So, when you go for the take down, you are fighting with do-or die ferocity. Once again, the san da fighter may not be used to this. When a san da fighter agrees to fight MMA obviously he will change his training. He may have an MMA coach and a Brazilian Jujitsu coach. He may train hard. But the reflexes and skills that helped him win in san da are second nature to him. They are ingrained behaviors and tendencies that may be hard to untrain. If he is a veteran of 50 fights where giving up a takedown was only a 2 point loss, maybe he would let it go more easily than if winning or losing depended on the takedown, like it does in MMA.

Some of the san da fighters who wish to fight MMA have asked me to help them with their training. And no matter how much we drill, they are so used to breaking off the engagement once they take someone to the ground. There is always a slight moment’s hesitation that could cost them the fight. The same thing happens to the wrestlers on my team who are trying t learn some MMA. When they get the opponent on his back, they are so used to pinning him, they forget that he will keep fighting from the bottom position and either get a reversal or a win. A momentary loss of focus is all it takes for the tide to turn.

Another rule that is different from san da to wrestling is that san da does not allow you to drop your knee on the ground while going for the takedown. San da also doesn’t allow sacrifice throws. Therefore, at least in my experience, the san da guys are not prepared to defend against these techniques. Once I realized that, I was able to complete the throw most of the time against my sparring partners. If I catch a kick, I instantly drop my whole body weight on the leg, dragging him to the ground. In the clinch, I utilize the Chinese leg-hooking techniques from traditional wrestling, but as soon as I hook, I drop my whole body on the leg I am attacking. I practice a lot of saltos and throws that I can do from the clinch, with either one or two underhooks, whereby, I go down with, and land on top of my opponent.

The trick seems to be to always use throws that san da doesn’t have. For example, if a san da fighter takes someone’s back in standing, he may do a lift and toss or a front trip, but he won’t do a BJJ sit-through, because that would be zero points in san da. But in an MMA fight, it would b a perfect way to take the san da fighter down and get on top of him.

Sometimes a san da fighter will go for a high single or double-leg takedown. When he does, you can sprawl and use a guillotine or front headlock to drag him to the ground by simply kicking your legs out behind you and dropping to the ground. The san da fighters I have trained with had incredible neck and back strength. If we fought san da rules and I tried a front headlock throw, they could simply support my body weight, no matter how hard I tried to lean on them and drive them down. But when we fought MMA rules, the second I kicked my feet back, I became really heavy, and they couldn’t remain standing.

Having said all of the above, there is still one huge problem to fighting a san da guy in MMA. Namely, you have to get past his kicks before you can even think of taking him down. If someone has a good way to do that, without getting kicked unconscious, please let me know.

Stressing Over Competition In The Martial Arts

The Myth of Earning A Living in MMA