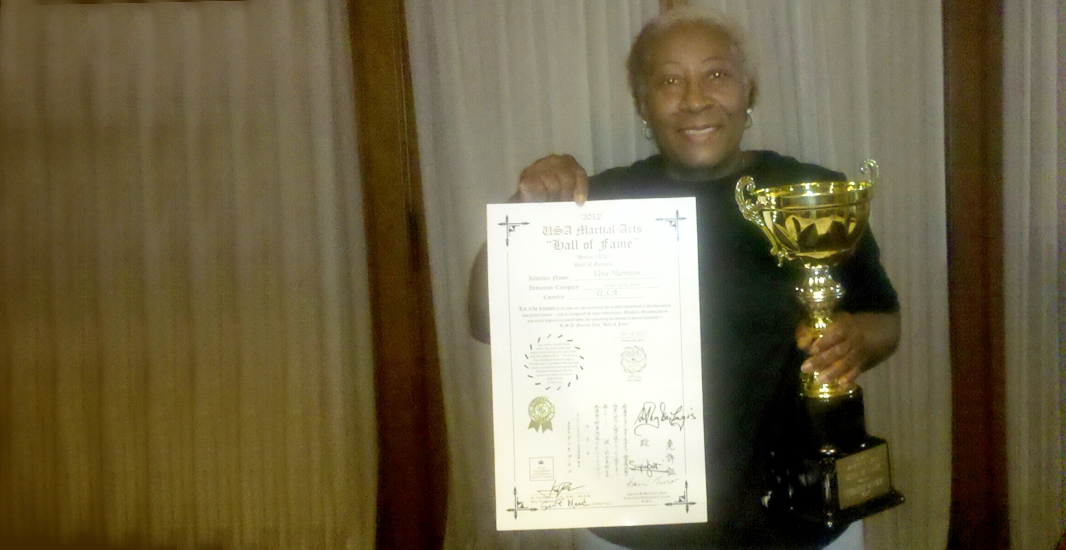 Hanshi Vera Harrison started her martial arts career at the age of 16, over 30 some years ago. She started with Master Douglas Grose and with Master Phillip Koeppel. She studied Shorei Ryu, Shuri Ryu Karate do and Shinto Yoshin Ryu Jiu-Jitsu attaining the rank of Shichidan 7th dan in Shuri Ryu and a holds a high ranking Black Belt in Shinto Yoshin self defense. She also holds rank in Judo, Kobudo and Aikido. In the early 1980’s she also started training in Tae Kwon Do in which today she holds a high ranking Black Belt.

Hanshi Harrison is originally from Webb, Mississippi, when at age 14 she dropped out of school to care for her ailing father. By age 16, with both of her parents now deceased, she moved to Peoria to join her family that was there. She started school again and went on to get a bachelors in nursing degree. While attending Manual High School in Peoria, she was active in track & field and softball. She was a natural athlete and decided to take martial art instruction.

She has competed in kumite, kata and weapons her over her martial arts career with emphasis on kumite.

Hanshi Harrison has competed in and won:

She has also been to Korea three times to train and compete winning a Gold Medal in competition.

These are just a few of the tournaments and events she has entered and won.

Hanshi Harrison has been inducted into United States Martial Arts Hall of Fame and many others.

Hanshi Vera Harrison is also a Registered Nurse with a Bachelors Degree in Nursing working in intensive care units for over 30 years. She also holds a degree in General Education and one in Arts and Sciences.

She is an avid runner competing in marathons and ultra marathons.

Hanshi Harrison has taught classes at the community college level and teaches an Outreach Program for children.

Hanshi Harrison still competes and owns and operates Harrison & Dorris College of Martial Arts in Peoria, Illinois which has a traveling competition team.