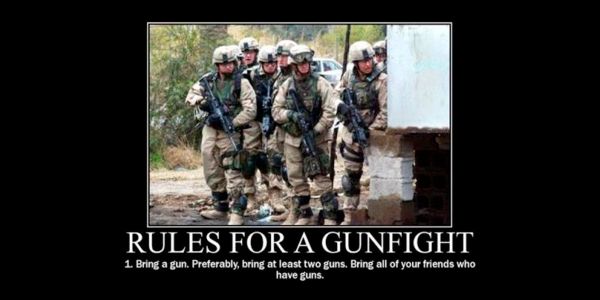 Many of us train with weapons. Some of us with firearms, others with a variety of edged and/or impact ones. The goal with guns is to develop the ability to shoot quickly and accurately at the drop of a hat. Those who develop and maintain this skill will likely survive an attack on the street.

Others train with knives and/or different types of impact weapons. Collapsible batons like the ASP (an impact weapon carried by police and security personnel) are easily carried and very effective. Knives are more intimidating and equally as deadly. Both require continuous training in order to develop the conditioned reflexes necessary for us to be competent in a street survival situation.

You may be wondering why I’m stating the obvious. It’s in order to set the stage for a hypothesis some will take exception too. Over my several decades of training in the martial arts, and in teaching civilian and police personnel, one thing is clear; the competency of those who train in both the martial arts versus just with a weapon is greater.

So what exactly do I mean with that statement. It’s simple. A person who develops the ability to use the weapons God gave him (his feet, hands, and wit), has a better ability to survive than those who don’t.

Still shaking your head? Still wondering why I would make such an assertion? Maybe this statement will help to clarify things. With the exception of firearms, a weapon is merely an extension of one’s arm. If a person develops the skills to use his hands and feet effectively against attackers, adding a weapon allows the practitioner to extend their reach and the affect of their defensive and offensive movements. Guns don’t have the necessity of needing to be in close proximity as they are very capable of reaching out at greater distances to touch their intended target.

I’m sure the point I’m making is clear by now. When you train in the martial arts you are prepared at all times. Your weapons never leave your side. If you leave your gun in the truck, or your knife on the night stand and you don’t have even well developed basic hand to hand skills, you may be S.O.L.

There are a couple of other issues one must consider regarding the use of weapons. First is whether your weapon of choice is legal in your state. Secondly is the ability to justify the weapon’s use. We all have the right of self-defense. But you must be able to clearly articulate the circumstances that resulted in your use of the weapon after the fact. That justification will be examined by lawyers in more depth and over a longer period of time than you may realize. Many of us in the cop career field refer to these nauseousguns in-depth analysis and examination of our statements as a proctologic exam. Once it’s over there is a great sigh of relief.

Many martial arts weapons are illegal in states from the Atlantic to the Pacific. Hand gun concealed carry license are available in all but two states in America. Knives are limited to a blade length or overall length when considering the handle, and a single edge. Students are not allowed to carry any kind of weapon on school campuses. So choosing a weapon for use on the street in self-defense comes with a need for serious thought and reflection. In the end developing the ability to defend yourself with your hands and feet will enhance your ability and skills with a weapon.

Not all those who train in the arts carry weapons. Their confidence in the abilities they’ve developed gives them the comfort to know they’re ready if the need arises. In the American Karate System we begin teaching weapons after a student has reached a mid to upper level grade rank. After that each black belt must demonstrate his expertise with weapons every time he or she tests for the next black belt level. This process ensures our members develop well in both unarmed and armed capabilities.

For those who chose to carry a weapon don’t forget it. If for some reason you leave the weapon at home, you’ll always have the natural ones with you if you’ve trained with them.