Xingu has been doing Capoeira since his youth. He started out with Mestre Vaughino at Capoeira San Jose and then moved out to Los Angeles in 1997 where he continued his training with Mestre Santo of Capoeira Batuque. Mestre Amen Santo gave Xingu permission to teach when Xingu became a Professor in the year 2000. Ever since then, he has been teaching Capoeira in the San Fernando Valley and was actually the first Capoeira teacher in that area and is still there to this day. 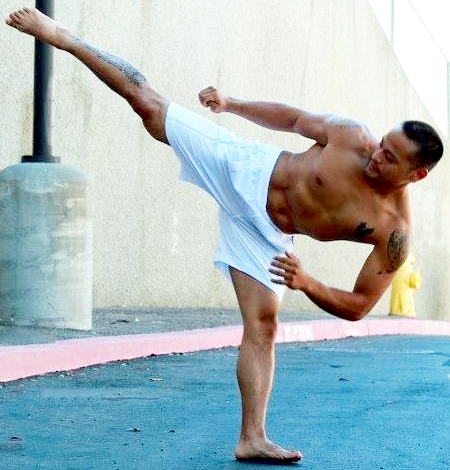 Xingu has also been involved in spreading and educating Capoeira to the world through the media. He has been in numerous theatres, commercials, music videos, and films diplaying Capoeira and has taught numerous actors and actresses Capoeira. Some of his past and current clients are Academy Award actress Charlize Theron (Monster, Aeon Flux), Lee Thompson Young (The Famous Jett Jackson, Friday Night Lights, South Beach) Bill Bellamy (Def Comedy Jam), and many more. Xingu has also taught for many programs to help the youth of the community, Such as the Upward Bound Program, P.S. Arts, Music Center, Los Angeles Unified School District, City Of Beverly Hills and others. He has always said that Capoeira helps individuals because it helps them get over their fears and understand who they are inside.