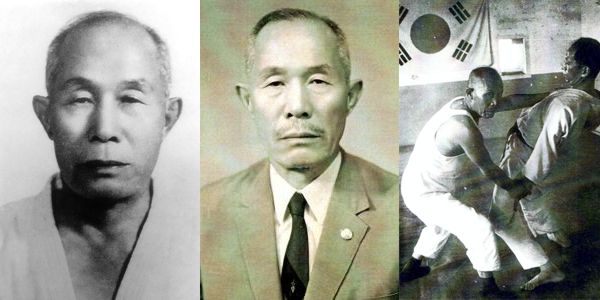 Yong-Sul Choi was born on November 9, 1904 and passed away on June 15, 1986. He was the founder of the martial art, hapkido. He was born in the province of Chungcheong in today’s South Korea. When he was 8 years old, he was abducted and taken to Japan, during the Japanese occupation of his country. It is said that while in Japan Choi became a student of Takeda Sokaku, and studied a form of jujutsu known as Daito-ryu Aiki-jujutsu. Yong-Sul worked as a house servant for Takeda Sokaku so it is possible that he was allowed to study with him even though Choi is not listed in attendance records as a student.

Yong-Sul Choi returned to Korea at the end of the second World War and in 1948 began teaching his art at a brewery owned by the father of his first student Bok-Seob Seo. He first called his art “Yu Sul” or “Yawara” later changing it to “Yu Kwon Sool” and “Hap Ki Yu Kwon Sool and eventually he called it Hapkido.

Yong-Sul Choi was honored with the titles doju, which can be translated as “Keeper of the way”, and changsija, which means founder. It is claimed that the arts of Hapkido, modern Hwa Rang Do, Kuk Sool Won, as well as lesser known arts such as Han Pul all owe a debt to the teachings of Master Choi.