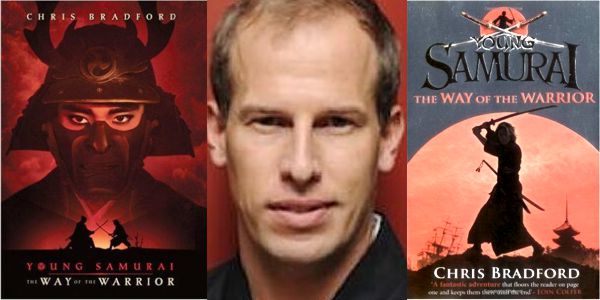 Young Samurai – The Way of the Warrior is a hero bred in Japan on Bushido, the sacred way of the samurai. A deadly ninja with one green eye. The picturesque setting of Kyoto, way back in 1611. And enough katana, wakizashi and shuriken* to make this a cutting-edge James Bond thriller, Oriental style.

Jack Fletcher is a rigging monkey on his father’s ship bound for the Japans, as the four islands of Japan were then known. All too soon, the Alexandria is besieged by waco — Japanese pirates — Jack’s father is killed by a mysterious assassin and Jack is left for dead. Rescued and adopted by a samurai lord named Masamoto Takeshi, Jack finds himself stranded in feudal Japan, a world away from England, his home, without even the familiarity of a language he knows. He must learn to speak and understand Japanese, learn the Japanese way and make friends with Masamoto’s own son, Yamato, who has nothing but contempt for the foreign boy. His only friend is a beautiful Japanese girl, Yamato’s cousin Akiko.

Yamato, Akiko and Jack are accepted for training at Masamoto’s samurai school, the Niten Ichi Ryu, in Kyoto. Now Jack must learn not just how to hold his chopsticks but also how to wield his bokken. He must learn how to conquer not just the enemy but his own fears. Meanwhile, Dragon Eye, the green-eyed ninja, wants something that Jack has in his possession — his father’s rutter, an atlas of the oceans of the world and Jack’s only hope of ever making it home to England.

While Jack puzzles over the Japanese obsession with “saving face” and their apprehension, if not hostility, toward anything foreign, he also finds acceptance once he has embraced the Japanese way. The first in Bradford’s series is a wonderful introduction to everything that is enthralling about Japan, from hanami and matsuri to samurai honor and respect for one’s sensei. If this doesn’t turn you into a Japanophile, what will?Young Samurai – The Way of the Warrior

Young Samurai – The Way of the Sword

Young Samurai – The Way of the Dragon

Young Samurai – The Way of Fire


Young Samurai – The Ring of Earth

Young Samurai – The Ring of Water

Young Samurai – The Ring of Fire

Young Samurai – The Ring of Wind

Young Samurai – The Ring of Sky

Young Samurai – The Return of the Warrior

USAdojo - September 6, 2010
We use cookies to ensure that we give you the best experience on our website. If you continue to use this site we will assume that you are happy with it.OkRead more