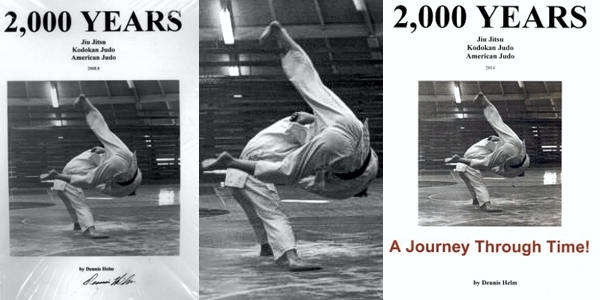 Dennis Helm’s 2000 YEARS – Jiu Jitsu – Kodokan Judo – American Judo – A JOURNEY IN TIME opens in the year 230 BC, with the Emperor Suinin ordering two strong men to fight to the death in his presence. The book provides a very detailed account of the origin of Jiu Jitsu and Judo, and then explores in depth the development of United States Jiu Jitsu and Judo with topics that take the reader to the present. There are extensive techniques presented by Masahiko Kimura (13 times All Japan Champion, Vince Tamura (3 times USA Champion, Takahiko Ishikawa (2 times All Japan Champion,) and Sumiyuki Kotani 10th Dan. The complete Ju-No-kata with Jigoro Kano, and extensive articles by Jigoro Kano, Donn F. Draeger and others are included – 274 pages of History. This is a very detailed historical book.

The cover of 2000 YEARS – Jiu Jitsu – Kodokan Judo – American Judo – A JOURNEY IN TIME shows Dennis Helm taking one of hundreds of demonstration falls for Ryozo Nakamura 8th Dan, during the 1970’s.

If you wish to purchase a copy of 2000 YEARS – Jiu Jitsu – Kodokan Judo – American Judo – A JOURNEY IN TIME on the Jiu Jitsu/Kodokan Judo history, contact Dennis Helm:

The cost is $35 US dollars plus $5.50 US dollars for USA postage. Out of the country postage is $15 dollars. Check or cash only, please.

The history of Jiu Jitsu is traced back to 230 BC and forward to 1882 when Kodokan Judo came into being.
SAMPLE TEXT

The origin of Jujitsu is lost in the mists of antiquity. The “Nihon Shoki,” THE CHRONICLE OF JAPAN, a history, compiled by Imperial command in 720 AD refers to a tournament of Chikara Kurabe, (a fight to the death), refers to the contest of strength, which was held in the 7th year of the Emperor Suinin.

The year was 230 BC. when Emperor Suinin ordered two strong men named Nomi No Sukune and Tagima No Kuehaya to wrestle in his presence. This struggle to test the strength and courage of the two ancient giants consisted mainly of kicking, hitting, and gouging with Sukune gaining advantage of his opponent by breaking his ribs, after which he “trampled” upon his loins and back until Kuehaya was fatally injured. Although this incident is generally cited as being the origin of wrestling in Japan, it would seem that it was actually more in the nature of Jiu Jitsu in view of the fact that Kuehaya was kicked and gouged to death. Although it is questionable whether the brutal fighting of the Chikara Kurabe bore any relation to either the Sumo or Jujitsu of later days, the event is recorded as an important historic proof showing the embryonic stage of both Sumo and Jujitsu in the remote past.

During this period fights to the death became extremely popular and were organized in almost every city in Japan. As the value of human life became more respected the brutal fighting art of Chikara Kurabe evolved into a more humane art called Kumi Uchi, the grappling of the Samurai.