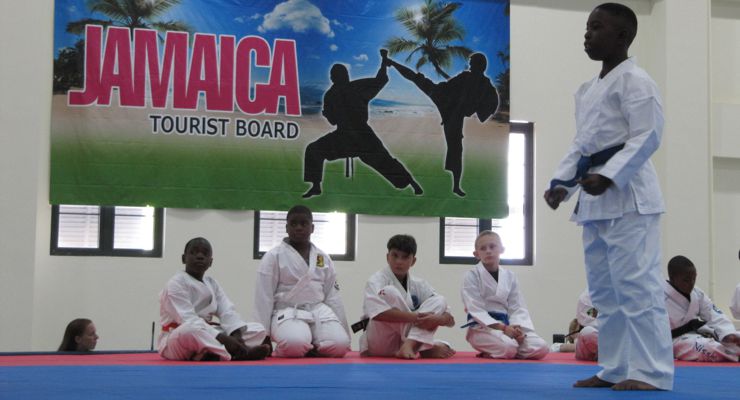 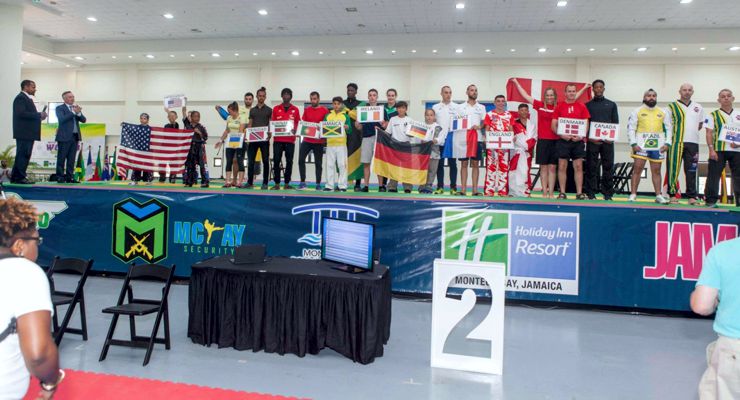 More than 1,000 competitors from 16 countries jammed into the Montego Bay Convention Centre for three days of non-stop action at the ISKA Amateur World Karate Championship Jamaica. This was the first time the ISKA had taken their unique venue to Jamaica. The event won high praise and accolades from the ISKA and officials from the Jamaican Tourist Authority.

We are delighted to bring our event here to Montego Bay Jamaica,” says Cory Schafer, President of the International Sport Karate and Kickboxing Federation. “This is our first time in the Caribbean. We expect to have some great competition and a lot of fun in what is one of the greatest resort vacation spots in the world.

As the competitors entered the Convention Center they were greeted with an energetic steel drum performance. The local musicians created the perfect atmosphere with their nonstop enteric concert. 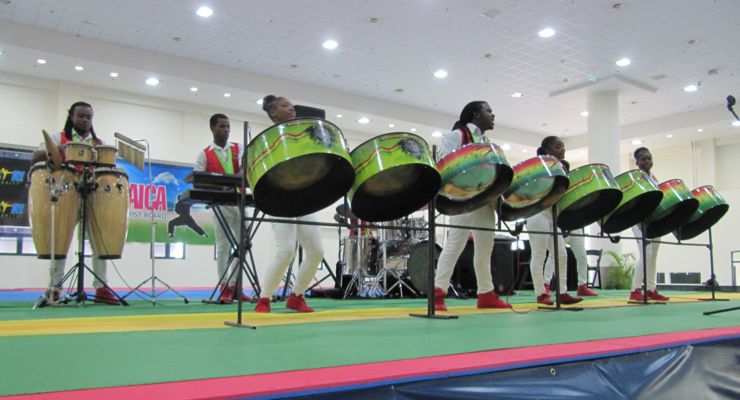 There were three rings set up on the arena floor along with a large elevated six-foot high ring. It was a continuous flurry of activity as the announcer called the fighters and kata competitors to their respective rings.

The ISKA officials and judges at the 2018 ISKA Amateur World Championship Jamaica did an amazing job of keeping the flow of competitors moving from one ring to another. It was apparent this wasn’t the ISKA’s first rodeo.

I have been covering events like this for more than…well; let’s just say I’ve been doing this a long time. Subsequently I have a great appreciation for the work that goes into creating a venue of this magnitude.

At the 2018 ISKA Amateur World Championship Jamaica, their were a variety of categories based on age and type of event: kata or kumite. I think the ISKA should consider one more category, the “Too Cute For Words” category. Some of these little kids are just that adorable in their uniforms and pads. Don’t get me wrong; they are there to fight and to win. But anything that endearing deserves a stand-alone trophy. 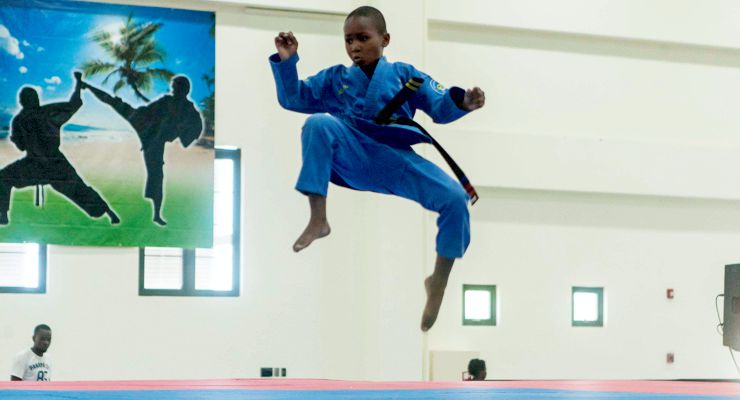 Watching the tykes take center ring, either in kata or kumite validates the future of traditional martial arts which instills the values of respect for others and self discipline. Which is more than I can say about some of the professional fighters I’ve encountered over the years. 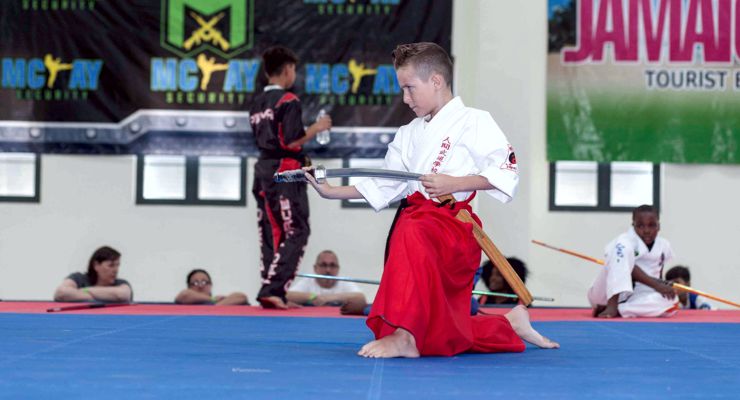 And the values I just mentioned, is a direct result of how they’re trained. So, congrats to the coaches, teachers and family members for embracing the true spirit of the martial arts in the dojo and at home. 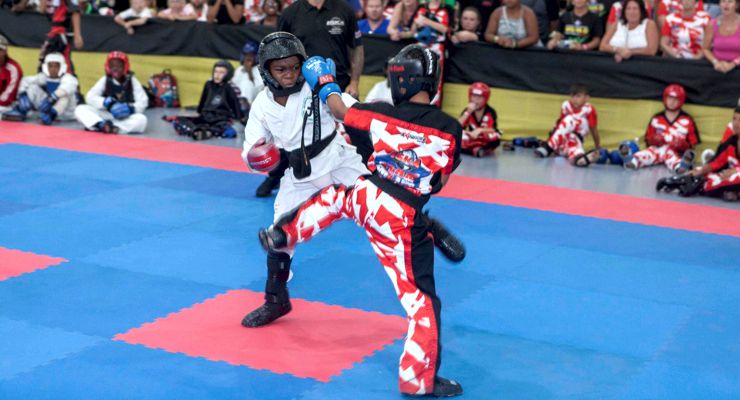 Now allow me to also recognize the spirit of intense competition. As you watch the video I’m editing for USAdojo.com, you’ll see some very intense coaches and fighters. However, after the heat of battle is over, at the end of the day, you will also see the respect that coaches and competitors alike have for each other.

Speaking the end of the day, day one ended a little after 9 p.m. The tired gladiators retired to the hotels to rest up for day two of the 2018 ISKA Amateur World Championship Jamaica.

Just about everyone involved with the 2018 ISKA Amateur World Championship Jamaica stayed at the Montego Bay Holiday Inn. Each evening the hotel provided family style Vegas shows on their outdoor stage. It was the ideal way to wind down after a long day of reverse punches and sidekicks. 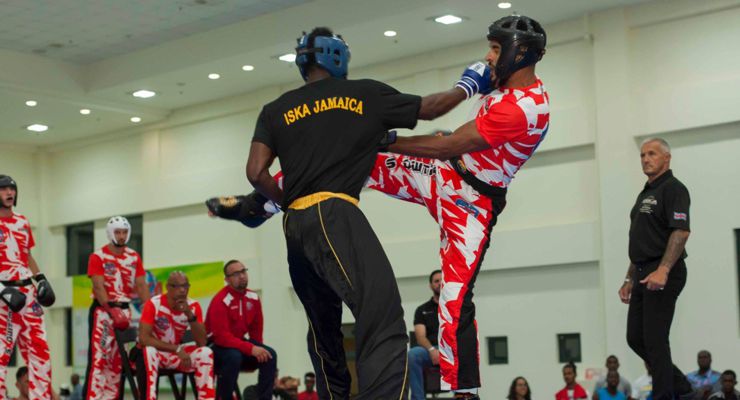 Day two started around 10 a.m. with the Seniors, Veterans and Masters divisions. The intensity picked up, as one would expect with the more experienced fighters and kata performers.

As I watched and videoed the action from ring to ring, I drifted back to my early days as a competitor. That was back in the Stone Age when light contact meant, if you went home with most of your teeth in tact and a broken nose, you were considered a winner. 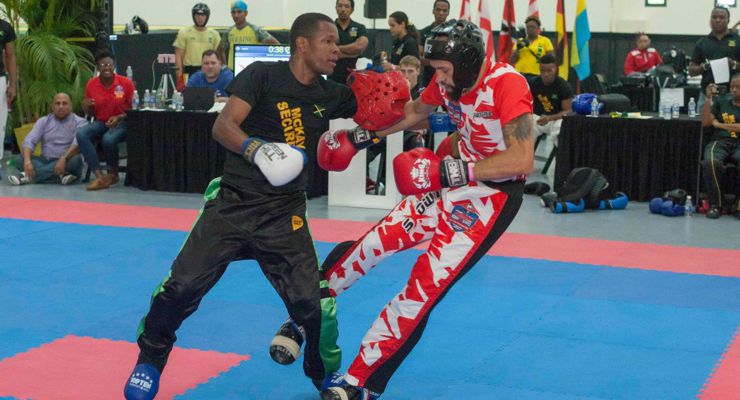 In the early 60’s safety equipment was limited to a cup and a mouth guard. Over the decades, protection gear has morphed into a cottage industry merging function and style designed with the latest safety innovations.

And, that’s a good thing. After all it’s called, “Sport Karate” for a reason. I was very impressed with the protective gear all of the ISKA players were using.

This state-of-the-art gear was mandatory at the ISKA event. Safety was at the top of the list for the event promoters. If a fighter didn’t have the sanctioned safety equipment they weren’t allowed to bow-in.

Lets talk sportsmanship for a second. I witnessed a young member of the Jamaican team scrambling to find his protective gloves but they’d vanished. The young boy was about to be disqualified when a member of the team he was about to fight, ripped of his own gloves and gave them to his opponent, who ended up winning his match.

But what really blew my mind were the uniforms. I think the ISKA should include a fashion show and trophies for the best uniforms. In my humble opinion I think Team USA would have won that event hands down, followed by the Germans. 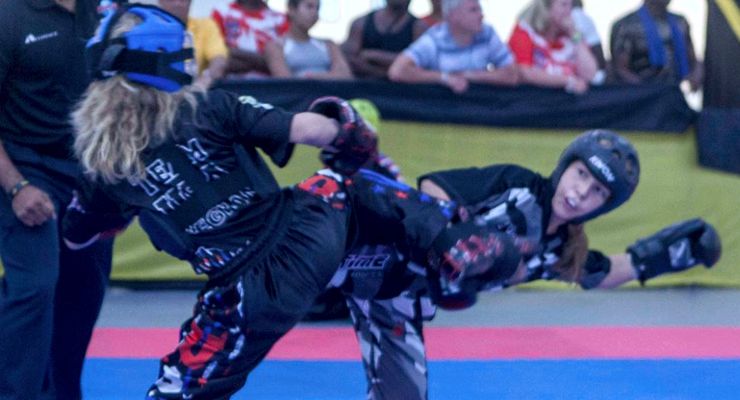 I am still pretty old school when it comes to uniforms. So when I spotted a young lady wearing a traditional white Tokaido gi I knew she would be someone to keep an eye on. She told me it was her coach’s idea to wear that specific uniform when she performed in kata. Her gi snapped with each punch and kick, adding to her 1st place victory.

Much of what I’m writing about will soon be available on video at USADOJO.com. Sorting through 9 plus hours of video takes time, but it will be worth the wait.

I could write about the fights but video clips will show you in real time how exciting the action was as I traversed from ring-to-ring capturing highlights and some lowlights in the process.

One of the elements you will see on the video is the difference in how various coaches work the corners. I spent a lot of time with the USA coach, Sensei Ray Bryant. His demeanor was calm and collected while offering support and specific tips to his fighters. 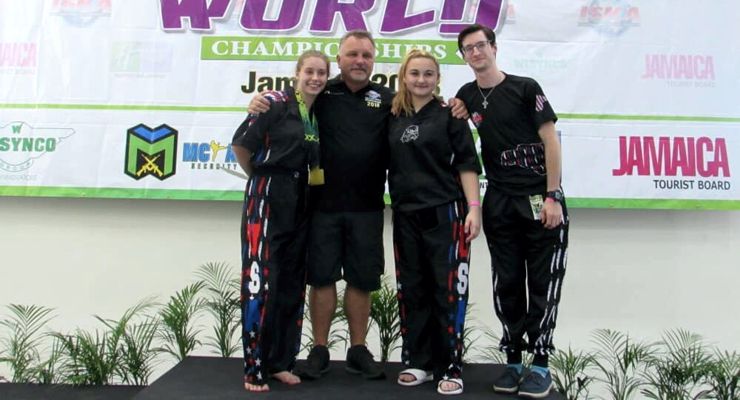 We will also watch a couple of coaches who were, well let’s just say they were a tad intense at times. One thing that seems to have never changed over the decades is that some coaches will often shadow fight their fighter’s opponent as if they were themselves in the ring.

There was much to be impressed by at this event. As mentioned I go back more than a few decades. Subsequently those tournaments didn’t have the technology that today’s fighters and judges have at their disposal.

The scorekeeping system blew my mind. But with that said, I’m still in awe of how a clerk at the grocery store scans items by sliding a loaf of break over a magical device on the counter.

In years past we judges were lucky to have the fighter’s names scribbled onto the back of a Denny’s napkin. The ISKA’s system of keeping score was state-of-the-art software. In addition to being able to register in advance and on site fighters could download their photographs, which would be used each time he or she competed.

At each score-keepers table were large color monitors that displayed everything from a countdown clock and a running score with individual points and photos of who was fighting who and what country they were representing. It even gave a point-by-point tally in real time as the fight progressed.

Not wanting to date myself more than I already have, but I’m still in awe of the fact that I own a phone that can take pictures. I can still remember when we didn’t have enough stop watches to go around during a fight. More than once while working a match I’d be counting the time left in the fight by saying, ‘one potato, two potato, three potato. TIME!’ So forgive this Baby Boomer by being impressed with the way matches have evolved.

On the last day of the competition the convention floor turned into sympathy of languages all blending into a unique harmony as each country began cheering and chanting for their fighters as finals got underway. 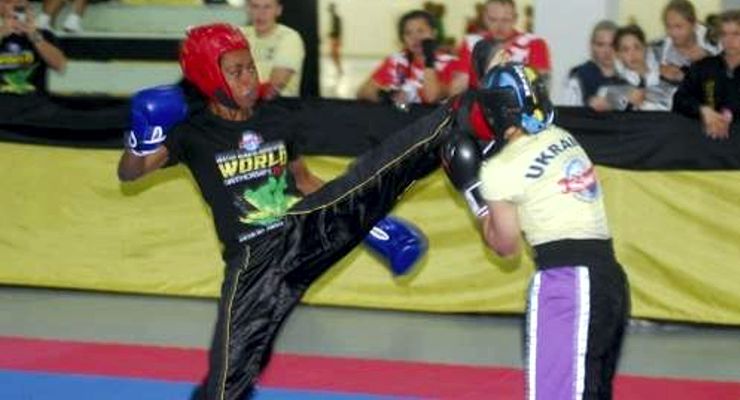 “I am very proud to be fighting for my country,” she says. “This will be my final year as a competitor and I hope to do well.”

All three days of the event began with music and dance routines from local performers; setting the mood for an exciting playoff.

Only the big stage was used for the finals for the 2018 ISKA Amateur World Karate Championship Jamaica so spectators sat on the mail floor with cellphones in hand doing their best to capture the action one snap at a time.

Prior the to fights, a string of officials and dignitaries had a few words to say about the event. Mrs. Nicolai Madden Greig and Chairman, Mr. John Lynch of the Jamaican Tourist Board, made it very clear how impressed they were with the ISKA stating that they would like for the ISKA karate event to become an annual event in Jamaica.

The night zipped by quickly as the crème of the crop competitors did their best to represent themselves and their country in kata, kumite and team sparring.

The hall reached a feverish pitch with each country cheering and chanting in 16 different languages. A harmonious accord of voices echoed throughout the arena, all-ringing in support of their country and their fighters.

Prior to the 2018 ISKA Amateur World Karate Championship Jamaica, Jamaica’s most popular sports were Cricket and Soccer along with polo. I think it’s a safe bet to say that sport karate will soon be added to that list.

Great job everyone. Please check out the video of your fights and katas along with a tour of some of Montego Bay’s favorite tourist destinations.

Watch for my video presentation of the event coming soon on USAdojo.com.