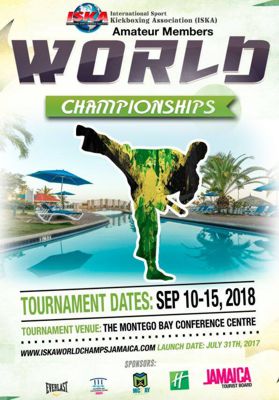 Ray Bryant, the head of the United States team that will be competing at the 2018 ISKA Amateur World Championship Jamaica from September 10-15, 2018 has confirmed that there will be 60 participants traveling to Jamaica for the tournament which is being hosted by Jamaica at the Montego Bay Convention Centre.

England has confirmed 167 athletes, so the Britons will most likely top the medal standings by their sheer numbers, but Bryant believes that the United States will finish among the top three.

“We have a decent-size squad, but nowhere near England. We have a nice group from Florida, Georgia and some from Newark. We have about 58 to 60 who will be competing,” said Bryant.

“We’re used to that. Even when we’re in Europe, they always bring like 200 people. We had more than a hundred qualify, but we’re getting hammered with the school schedules. The one thing with the Brits, they have more flexibility with their schools. We will do fine. We’re always in the top three, even with small numbers,” he added.

Bryant said Jamaica will be in for a treat, as the American squad will feature top fighters who were not competing at the July 2018 U.S. Open ISKA World Martial Arts Championships, the world’s largest martial arts open, because they were working as officials.

“There is Catherine Mouse Millner, who has won her weight division for the last six years. We will also have Megan Dunlop, who has won forms and fighting almost every year,” pointed out Bryant.

“Sisters Alex and Andrea Adams, who have each won six medals every year, doing four different forms, as well as points and continuous sparring,” he added.

Bryant said the United States delegation will arrive in Jamaica on September 10 for weigh-in with a delegation close to a hundred.

“The overall delegation, parents and everybody, close to 100 are coming.

We all fly in on the Monday of the tournament,” he explained, but lamented what could have been a bigger group.

“It’s a big vacation thing. Jamaica is close to us, too, so it is advantageous for everybody to go,” he said.

About 2018 ISKA Amateur World Championship Jamaica
When Jamaica applied to host the world-renowned ISKA World Championships it was never expected that a small island would win the bid versus more experienced applicants from the European community. When Jamaica won, it was clear the island had made its mark on the world following the ITF World Cup in 2014 showing the popular hosting countries that Jamaica was capable of handling such a large event.

This event is a sporting event that will display martial arts fighting skills. It is a closed tournament specifically for national qualified amateur teams. This specific martial art competition is the mat sport version that is; martial arts sparring that is done on mats and not in rings.

About The ISKA
The International Sports Kickboxing Association formally the International Sports Karate Association is the largest sports martial arts organization in the United States with representation in over forty countries worldwide. It is often described as the most viewed organization in sports martial arts with a long history of involving major television networks in their product offer as well as a strong promotion thrust in social media.

Media Involvement in the Event
The ISKA World Championships will be aired on the island’s most popular radio stations; Radio Jamaica, Zip FM and IRIE FM. The event will be covered live on Jamaica’s top television stations CVM and TVJ. The tournament days will be covered over 4 days and concluding with a celebratory Gala Night and Gold Cup Competition.

As arranged in 2014, The Jamaica Tourist Board will sponsor every major competition, medal ceremony, and commemorative section.

Guy Larke - February 1, 2019
We use cookies to ensure that we give you the best experience on our website. If you continue to use this site we will assume that you are happy with it.OkRead more