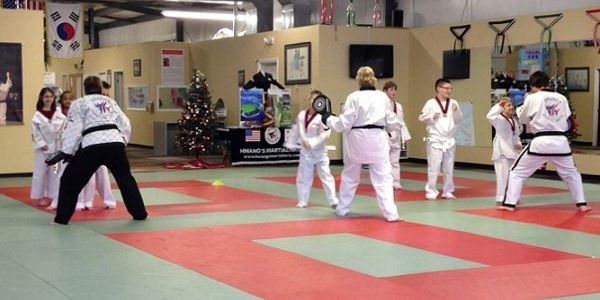 Louisville.com ~ By Kachina Shaw – A pilot taekwondo program for children with learning differences is proving to be everything its organizers hoped it would. The class is named Hwang’s Warriors. “We wanted it to be about how they go through so much. … They fight so hard every day,” says Hwang’s Martial Arts Director of Operations Mimi Hwang of the program.

A Hwang’s student and parent of two children on the spectrum, Sabine Buchanan, proposed the idea to Hwang, and the two collaborated on tailoring the class. “Her son was keeping up in typical classes, where there can be 20 to 60 people, and lots of noise and yelling, but her daughter didn’t react the same way,” Hwang recalls. “The class of 10 or fewer children is for kids with learning differences, those who are hard of hearing, or speech delayed.”

Speech and occupational therapists who have clients in the class and who also attend the class have reported seeing “phenomenal change” in coordination, balance and focus for participating kids.

The instructors for Hwang’s Warriors volunteer their time, and everything is donated, from the use of the facility to the uniforms. An Advanced Warriors class has been added, for which participants pay a small fee, and Hwang is working on securing dedicated instructors to lead the program and funding sources to aid some participants. The facility has plenty of space, she says, so it’s now a matter of finding instructors and perhaps sponsorships to aid students with financial support.

“Some of these families go to therapy up to five times a week, and they don’t have a lot of extra funds.”

When FEAT of Louisville, or Families for Effective Autism Treatment, let its members know of the pilot program, the response was immense, says Hwang, so much so that the class currently has a waiting list. However, both Hwang and Buchanan, who handles the enrollments for the class, encourage interested families to get in touch. Both hope to continue to expand the program to meet the demand.