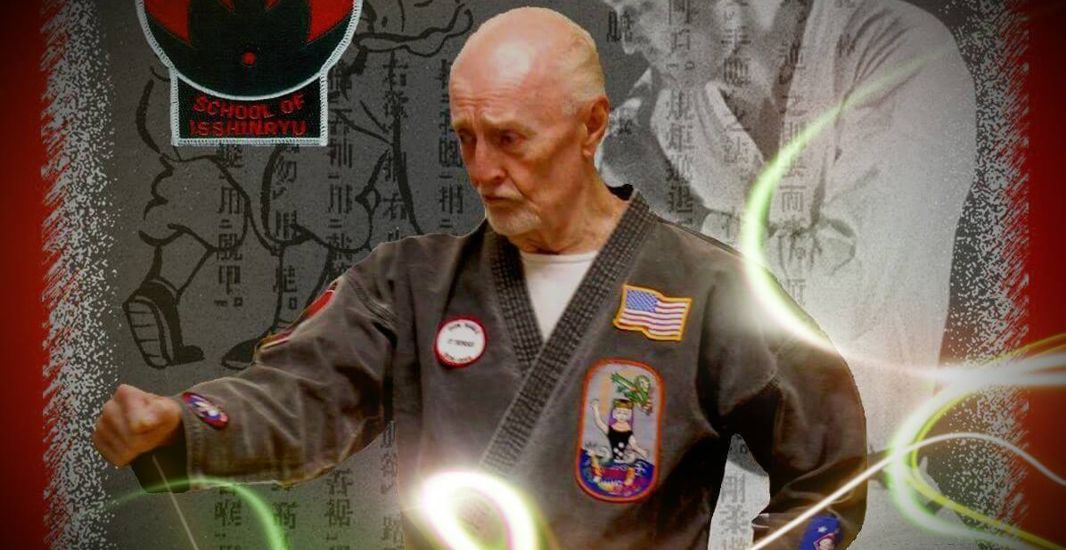 Ed McGrath began his martial arts studies under Sensei Don Nagle in 1958 training in the first Isshin-ryu dojo established in America. The dojo was situated outside Camp Lejeune, the home of the Second Marine Division in Jacksonville, North Carolina. The dojo’s student body was made up of Marines serving in the Corps at Lejeune. It was from this dojo that Ed McGrath, then a Lieutenant in the USMC, began his career as a fighter and martial arts instructor. In 1959, when Sensei Don Nagle left the service and became a civilian again, Sensei Ed McGrath succeeded him as chief instructor at the New Bridge Street dojo and with the Marines at Lejeune where he continued training the famed Second Force Recon personnel and the guard detachment at the legendary Brooklyn Navy Yard. On weekends, Ed McGrath often drove up to Sensei Nagle’s new dojo in Jersey City, New Jersey, for a chance to fight his teacher’s new students and share his knowledge with them. During his last two years in the Marine Corps, Sensei McGrath was often performed demonstrations of Isshin-ryu karate on the base, as well as at county fairs, and the Auto Show in the New York Coliseum he was often called upon to represent the Corps at tournaments such as those held in Madison Square Garden and in the World’s Fair pavilion in New York.

Sensei Ed McGrath, was released from the Marine Corps in October 1962, due to a permanent service related disability to his left knee received while doing a hand to hand combat demonstration for the Marine Corps. In July of 1963, he began teaching karate outside the Marine Corps, at American dojos in Queens, New York. Sensei McGrath’s began teaching six days a week, three hours a class at the three locations in Ridgewood, Jackson Heights and South Jamaica, Queens. His student body grew quickly and the school was producing championship competitors within the first year. Eventually these dojos would win championships in 27 states, ranging from Green Belt to Black Belt, culminating in the World Black Belt Championship, won by Sensei McGrath’s student Malachi Lee at the famed Manhattan Center. Among the fighters who became champions and eventually great teachers, in their own right, were Bob Baker, Richie Bell, Joe Burgess and Nick Adler.

Sensei Ed McGrath wanted to maintain contact with the Marine Corps so he went to the USMC Headquarters in New York City and volunteered to help their recruiting program. As a result, Master McGrath visited bases and demonstrated his Isshin-ryu Unarmed Combat techniques, appeared at county fairs with his team, and at recruiting days at Colleges in the New York area.

In 1969 Sensei Ed McGrath moved to Long Island, New York, and opened another dojo in Bellmore Long Island and there he continued to turn students into champions, with fighters including Barry Steinberg, who began training with Sensei McGrath at age 12. That dojo also became the home school to Al Wilder and Dennis Bootle, who followed Sensei Ed McGrath out to Bellmore.

In 1972, Sensei McGrath moved his school to the Lindenhurst, Long Island YMCA and was blessed with a new group of committed students who would continue to study with him as he moved to a dojo in Bayshore and then at the Kioto Dojo, on Sunrise Highway in Oakdale/Bohemia. Among these students were some of the best in Master McGrath’s career, and many owho are now Masters. Included in these students are Frank Klos, Dan Vena, Lou Luceri, Frank Black, John Pinghero, and Steve Dilorenzo.

During this time, Master McGrath had become a favorite with martial arts magazines, and he appeared on the covers of Marine Corps newpapers and on the cover of Official Karate magazine  a number of times. One article mentioned that “during Master McGrath’s initial two years of training, he worked out five hours a day, seven days a week and took on any fighter he could find with a strong reputation. He often appeared to contest with the students of other teachers, fighting as many as 20 or more opponents, without a rest between matches.”

During this time Master Ed McGrath filled in for a missing announcer at Gary Alexander’s first tournament, and he found himself in demand as the master of ceremonies and a blow by blow announcer at tournaments all over the country. Eventually, Ed McGrath became known to the magazines and fans as the “Voice of Karate.” In this capacity, he became good friends with many of the contestants and performers, such as, Chuck Norris, Bruce Lee, Joe Lewis, Tom LaPuppet, Mike Stone and the great Broadway star, Gregory Hines.

Because of his numerous talents, he came to the attention of Leeming-Pacquin Corp. and they designated Ed McGrath as their representative for the new product, “Hai Karate” After Shave Lotion. His hands appeared on the bottle and he could be seen on the gift box doing a flying side kick. Master McGrath also made appearances throughout the country, promoting the product by doing exhibitions and speaking to the audience about the after shave and martial arts.

On November 8, 1997, Master Don Nagle promoted Sensei Ed McGrath to Ku Dan, ninth degree Black Belt. At that point, with his teacher and best friend Don Nagle, as 10th degree Black Belt and Grand Master of Isshin-ryu Karate, Sensei McGrath was content that he had reached the apex of his career. In August of 1999 Master Don Nagle suddenly passed away, but just before his death, Master Nagle named Sensei Ed McGrath his successor.

During his 56 years of service to the martial art of Issshin-ryu karate and to his Master, Don Nagle, Grand Master Ed McGrath received numerous awards:

One of Grand Master Ed McGrath’s goals was to teach the people of his community how to defend themselves. His second goal was to unite in fellowship all those who practiced Isshin-ryu karate in the United States and to bring about a renaissance of the art by maintaining and increasing the fighting spirit that is an essential element in every student, by giving students the pride of perfection in practicing kata, and by building loyalty to both the art of Isshin-ryu and to the art’s teachers. He knew that Isshin-ryu, just as every art, must evolve, and the Masters must see to it that change is always to the benefit of Isshin-ryu as an art and to its students. Grand Master Ed McGrath strove to see that pride in Isshin-ryu’s past, would remain as a banner to follow in the future, just as his teacher and friend, Grand Master Don Nagle had done.

Grand Master Ed McGrath passed away on December 20, 2014 at his home.

The article, “The Chief Instructor – Ed McGrath, Grand Master of Isshin-ryu Karate, 10th Degree Black Belt” is the basis of this article.