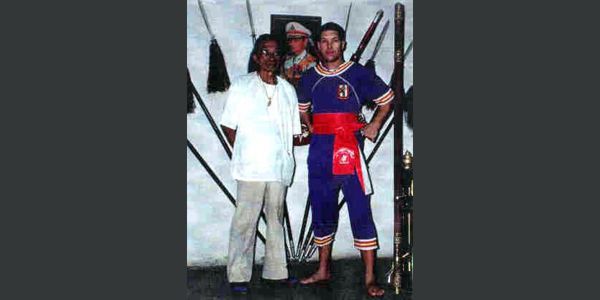 By Terry Tippie ~ I was very sorry to hear of Ajarn Sumai’s (Arjarn Sammai Mashamana) death in 1998. He was an inspiring and gracious man. This article appeared in the TBA Newsletter in 1995 after a brief visit to Thailand. There will be no more Grandmasters of Krabi-Kabrong.

The Buddhai Swan Sword Fighting Institute is a place where the ancient weapons based art of Kabri-Kabrong, the mother art of Muay Thai, is taught to young Thais, the Thai military and, recently, martial arts enthusiasts from around the world. Buddhist discipline and tradition are also an integral part of the training.

I visited the school briefly in late 1994. The school is located in suburban Bangkok and has a thatched roof that stretches out over a large open-air training area trimmed all around with tropical ferns, flowers and vines. The walls served as racks for a storehouse of well-used weapons.

Students, many of them high-school age, were dressed in the bright blue pants and tunic of the Buddhai Swan school. They worked in groups of two or more and focused on their training with all the seriousness of professional fighters. My eyes were drawn to two men circling each other with double swords, knees bent, eyes locked. The taller man stepped forward and initiated a savage combination of powerful alternating slashes, which the shorter man skillfully blocked, sending sparks from the steel blades showering across the floor. Then the smaller one shot back a foot jab to the taller manâs solar plexus that knocked his opponent to the ground and leapt at him with a fully committed two hand slash that carried all the intensity of a Muay Thai kick.

Ajarn Sumai Masamarn, Founder and Director of the Buddhai Swan school, rounded the corner and strode towards me with a vast smile and a firm handshake. I had been told Ajarn Sumai is very young for a man in his 80s, but still I was amazed at his agility and vigor, which is like a 25 year old. He guided me through the school, explaining the training and taking opportunities to point out its history. Ajarn Sumai had been a champion saber fencer and judoka in his youth, but turned to Kabri-Kabrong at an early age. By the time he was in his late 20s, his skill at Kabri-Kabrong was renowned. Upon the opening of the school in 1934, the King of Thailand himself paid a visit to the school and gave Ajarn Sumai a flag which still hangs with pride in the school. Today the Buddhai Swan is the only government recognized institution dedicated to the development and maintenance of Kabri-Kabrong.

Each of their weapons has certain attributes which are unique, yet all are equally effective in skilled hands. During training the practitioner will first learn the weapons matched against the same weapon. As time and learning progress, each weapon is matched against the other in order to learn the strengths and weaknesses associated with each. Drills involving all the weapon categories are combined to form extravagant demonstrations and effective drills for combat reflexes.

Despite its roots in the military clashes fought by the Siamese army, Kabri-Kabrong involves spirituality and tradition that is very important to the Thai people. Upon enrolling at the Buddhai Swan, students go through a ceremony in which they will be protected from injury. During this ceremony, they promise to uphold five principles of the Buddhai Swan:

As part of the initiation ceremony, students are brought into the proud brotherhood of the Buddhai Swan, which extends to countless Thai royalty, the Thai military, and generations of young Thais.

Before each training session, match or demonstration, it is essential to perform the dance-like Wai Kru ceremony. The Wai Kru are ceremonies which are deeply embedded in Thai culture and their Buddhist beliefs. The Wai Kru pays homage to the practitionerâs deity, their mother and father, their instructor and all those who have passed away teaching the art. Each moment of the Wai Kru is significant and Thai people observing the dance can identify its meaning. Each weapon has two Wai Kru, one standing and one kneeling. Each is highly elaborate and a great deal of training time is spent learning this part of the art. Ajarn Sumai emphasized that it is very important to have a clear mind and a good heart when training with live blades.