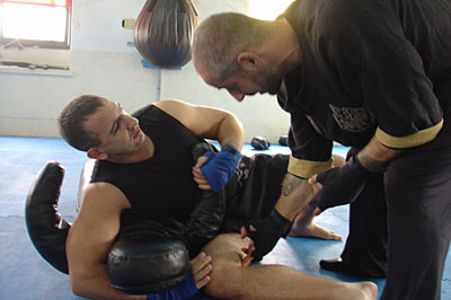 One of Taiwan’s last remaining Monkey Masters, Al Haroun Hisham, wants to fight in the K-1 and UFC to show the world the power of traditional Chinese martial arts!

Master Hisam’s hands are huge and swollen, as hard as rocks. In demonstrations, Al Haroun Hisham uses them to smash granite slabs to dust. One could only imagine what those hands would do to your skull, even through boxing gloves.

The gym is a four story walkup, overlooking a highway in Tainan, the ancient capital of Taiwan. Here, 37 year old Al Haroun Hisham, a German born Syrian is one of the last keepers of the traditional monkey fist.

After several hours of forms and body hardening exercises, Al Haroun Hisham begins his daily ritual of bag work, running, weight lifting, and wrestling with a 50 kg dummy. This the training that won him the International San Da Wang championship last year, and the one which he hopes will carry him on to a repeat win of San Da Wang, followed by the Art of War in China, and eventually landing him in the UFC or K-1.

Al Haroun Hisham weighs over 80 Kgs of rock solid muscle and carries very little body fat. At first glance, his routine looks like a mix of East and West, new and old, but, Hisham says that most of the techniques he uses were developed in China centuries ago.

“The ancient monks ran. They hit the bag. They did everything that we do today. But, they also used meditation and Chinese medicine to harden the body both inside and out.” Explains Hisham. He doesn’t believe he is brining something new to the MMA world. Instead, he believes he is helping the world to rediscover something that was lost.

“My traditional Chinese martial arts training involves hardening the forearms, inside and outside. In the monkey, we punch with the wrist, so we have to harden the wrist. We punch back hand, and hand knife edge, as well as the palm. If we condition the entire hand, the monkey claw is very, very dangerous.”

Al Haroun Hisham also uses Chinese conditioning on all parts of knees, elbows, and feet. “I practiced the conditioning like iron shirt, combined with Chinese medicine. Internal and external training: this make the body like a weapon.”

Hisham’s family originates in Damascus. “My father immigrated to Berlin in early 60s. Back in Damascus, my family practiced wrestling for generations. I grew up with it. My grandfather wrestled. My uncle was a wrestling master, a national team member. He won many regional championships and went to the Asian games. He was my first teacher. We didn’t have a real school, so we wrestled on the floor with mattresses.”

“Old school wrestling in Syria is different than modern Greco Roman They used to head-butt and grab skin or cheek muscles. So, when they threw you, they ripped out the flesh and muscles. And, they did really bad stuff to you on the ground.”

Al Haroun Hisham first fell in love with Chinese Kung Fu when he was a young buy, watching movies.

“My father exported German cars Damascus. He used his money to buy several cinemas in Berlin. In the 1970s, we were the first ones playing Chinese martial arts movies. My father sat my right in the front row, when I was only four years old. He watched the Shaw Brothers and all of these old school martial arts movies. Afterwards, I went home and practiced what I shad seen.”

“My parents pushed me to do some exercise. My mother was a ballet dancer. My father didn’t want me to do that, but my mom taught me the split and stretching. My father always wrestled with me.” But most important was the influence from the movies. “My goal was to become a Shaolin monk. This was something I really admired.”

While growing up, Al Haroun Hisham earned a black belt in Tae Kwan Do. While he did his national military service, he also learned some Chinese martial arts which were taught to German paratroopers. He eventually found a monkey master in Berlin and studied with him for four years. He liked the Chinese martial art that he was learning, but he suspected that something was missing.

“It all looked like the ballet my mother used to do. It was very beautiful, but where was the application?”

The old school wrestling had taught Al Haroun Hisham that modern sport arts could be watered down versions of ancient, deadly martial arts which were applicable in real fighting. So, in 1996, he came to Taiwan first time.

“I did a lot of research which said that there were three major migrations of Chinese Kung Fu masters to Taiwan. The first was in 1644, during Ming and Ching Dynasties.” Next, the Boxer, after their failed rebellion in the summer of 1900, escaped to Taiwan. Finally, during Mao’s cultural revolution, when all masters of ancient arts were being killed, many Kung Fu masters took refuge in Taiwan.

According to Al Haroun Hisham, “The real martial art is not found in Mainland China because of the communism. But, I thought it could be found outside of china, in the Philippines, Malaysia, Indonesia, Hong Kong, Macao, and Taiwan.

Al Haroun Hisham used money he earned from his school in German and from his work as a bodyguard, to finance his trips back and forth to Taiwan, seeking the masters. Eventually, in 2005, he settled permanently in Taiwan. He is married to a Taiwanese woman, who shares his vision of rediscovering the ancient Chinese arts and showcasing them to the world by winning the K-1 or UFC.

“I am not a snake. I am not a tiger or a praying mantis. My body looks like a monkey. So, this is a style that works for humans, and the animal inside you can come out. I traveled all over Taiwan to find masters. I heard some legends that they didn’t pass their knowledge because monkey is a special technique which they didn’t want to teach just anyone. They taught some bits of monkey and incorporated it into existing animal styles. But no one wanted to teach the real monkey because it is so deadly.”

Al Haroun Hisham feels that the Hanaman boxing practiced in Thailand should also be included into Monkey Kung Fu. After all, it is the same monkey god in both countries. Therefore, he used flying knees and elbows.

Eventually, Al Haroun Hisham found an 88 year old master, who was practicing monkey, but teaching crane. This master was one of only two which Hisham found, and he has since died.

Next, Al Haroun Hisham went to the monkey temple. “They had a Dao oracle, who meditates then goes crazy, gets possessed, and people ask him questions. I was watching and he called me in and asked what do I want what is my wish.
I asked him some questions he couldn’t know, things about Germany. And he gave me some answers which were correct. I don’t really believe but my family does some Sufi things so I asked more about monkey fist.’

Eventually, Al Haroun Hisham was given permission to meditate in the temple. After 12 days, something happened. I started to move in a strange way, I couldn’t open my eyes, and I nearly collapsed.” Then came the visions.
“People told me they saw me and knew the Monkey King was in my body. I saw monkeys jumping around. I was very afraid. Afterwards, I created some new techniques which I learned from the visions and I made a new monkey form.”

“I believe this because it happened to me. If I tell westerners they don’t believe. But I have a different background so it is different for me.”

During his search for a monkey master, Al Haroun Hisham found a lot of so called masters, but they weren’t fighting.

“In Germany there is a branch of Wing Chun which made their name fighting like the Gracies did. They challenged everyone and won. So, now there is no question. We all know Gracie jiu Jitsu is good. Some people say you shouldn’t fight, it is against the code. But how do you know what level you are at if you don’t fight?”

“I want to fight in MMA and K-1 because there aren’t many Chinese or traditional martial arts in there. I think in the beginning there were a few, but I don’t know if they had thirty years of experience.”

“When you meet MMA guys, Thai boxers, and boxers, if you tell them you do TMA, they look at you and smile.”

A lot of the reality and professional fighting crowd think TMA is a useless joke. Ken Shamrock said in his interview, after his loss to Hois Gracie, that when he saw Gracie come in, wearing a ghi and a black belt, he just assumed that he didn’t know how to fight. Ken guessed wrong that day. And this is what Al Haroun Hisham hopes to show to the world.

“People look down on Chinese martial arts. They say Muay Thai are the hardest, boxers are the fastest…But what about traditional martial arts?

They have 3000 years of development. How can they not be good? I think the big question is how you practice martial art. If you really practice six hours a day you can be good. If you chose the right way, and if you don’t involve into so many techniques you can be good.”

“I was a student of TMA before. The master said, for that style, you need 36 forms. For that one, 72 forms. But after a while, I wondered why am I trapped into a lot of techniques if I can’t use them. So, real martial arts only have a handful of forms five is enough, including a breathing form. And then the rest is application.

Al Haroun Hisham has many reasons for wanting to fight on the world stage. “First, I want to prove if this thing I made up works or not. Secondly, for a boxer, 25 years old is peak, but for TMA 40 or 45 is the peak. I really admire old MMA masters Randy Coutour for example the best example for real martial artists. He is over 40, but it is not easy to defeat him. The young guys 25 to 30 are good, but how long can they keep this level?”

Al Haroun Hisham tells about a Taiwanese master who still trains at age 88.

“Chinese martial arts says, learn chi and ne gong, and you can stay healthier and stronger. Add the gong the working out and the skills and this is real kung fu.”

Al Haroun Hisham says, “Many masters are practicing martial art, but they forgot the martial part.” He went on to say that many westerners are only practicing the external, the fighting, and have forgotten to add the rest. Al Haroun Hisham believes a complete Chinese TMA fighter can win.

They say Gracie Jiu Jitsu is the best, but Randy Couture doesn’t do BJJ he does traditional wrestling and he shows everyone there is something more.”

Al Haroun Hisham wants to do the same, to show the world that there is something beyond the mat.