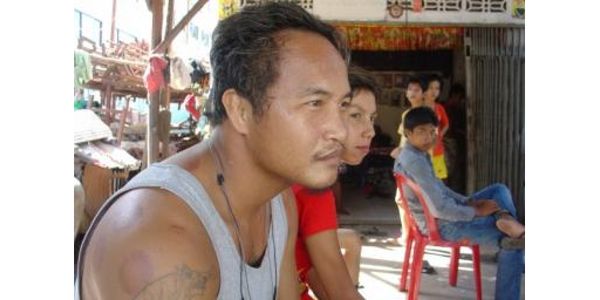 Eh Phou Thoung and Oed Phuo Thoung are Cambodia’s champion fighters but they live in squalor and obscurity.

In the world of professional sports, politicians have long learned that great athletes make great PR. Basketball player Yao Ming is probably the first Chinese national to become a household name. Paradorn brought a lot of positive media attention to Thailand. And, you would have to go into the deepest regions of a remote jungle to find someone who has not heard of Tiger Woods.

In return for making the country popular around the world, top athletes are paid huge salaries. Boxing champion, Manny Pacquiao, has become a national legend, almost attaining god like status, and even made a run for the congress. The Philippines is a relatively poor country, and yet, Manny is earning $5,000,000 (USD) for his next fight. Muhammad Ali hasn’t fought in over twenty-five years, but has been a goodwill ambassador of the US as well as the US ambassador to the Islamic world for years. Last year, he appeared on a list of highest paid entertainers, earning an income of $55,000,000.

Cambodia suffers from such a lack of marketing that even Angkor Wat failed to be recognized as one of the Seven Wonders of the World. Ask strangers on a street in Europe or America, and most likely the only famous Cambodian they can name is Pol Pot. The only other names which come up frequently in search engines and chat rooms are the two Khmer boxing champions, brothers, Eh Phou Thoung and Oed Phou Thoung. For overseas Khmers, the two brothers are major heroes. Fight fans around the world, would love to see the brothers fighting the leading champions of other countries, particularly Thailand.

Unfortunately, the big international fights never happen, as the Cambodian powers that be have more or less forbidden the brothers the right to fight outside of the country. They could have been respected international champions, brining pride to their beleaguered nation, instead, they live in absolute poverty, doomed to a life of obscurity with no end in sight.

Is this the right way to treat your national treasure?

Behind the ugliest slum building in Phnom Penh, is a neighborhood associated with prostitution, drugs, and gambling. Down a filthy dirt road, where local inhabitants sort trash to make a living, there is a two story wooden house, which serves as Eh Phou Thoung’s gym, as well as home for his family and his stable of twenty fighters.

Eh Phou Thoung, a veteran of more than 160 fights, sits listlessly on a wooden bench, with a look of tired boredom on his face. In spite of his ferocity in the ring, he is a kind and boyish fellow, who I have known for years. Every time I look at my old friend, I can’t help but feel that his life is something that happened to him, rather than something he chose. 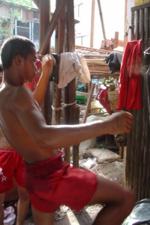 At age 36, he has gained a lot of weight and clearly lost interest in training.

“I still fight sometimes, but only a little bit.” He said. He tells me his official record is 156 fights, with 7 losses and 4 draws. “No one in Cambodia can fight with me.” He lamented. Now, when he gets fights, they are mostly with foreigners.

“I fought in Thailand once, on the king’s birthday.”

Prize money is doubled on the King’s birthday.

Now, Eh dedicates most of his time to raising his twenty young boxers. “It is like a big family, and I am the father.” He laughs. Eh buys ice cream from a passing vendor. He eats three while we talk.

To give every club an opportunity to fight, the two networks, CTN and TV 5, each allow one fighter from each club each week. Since the club gets to keep a percentage of the purse, this means that Eh’s club has an income of some percentage of $30 – $100 a week. It also means that each fighter will only fight a few times per year.

Cambodian boxing is a far cry from Manny Pacquiao.

“Some of the kids don’t even want to be fighters.” Says Eh. “They want to be bodyguards. Sometimes important people come here to scout for bodyguards.”

Flies buzz as the neighbors dump endless piles of trash on the muddy ground. They pick through the refuse like jackals on a fallen zebra. I am told that the house with all of the people crowding around and shouting is an illegal gambling parlor. The police stop by approximately every fifteen to twenty minutes and come out, slapping their front short pocket. 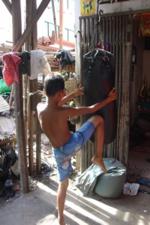 Eh gets slowly to his feet to work the heavy bag. He has gained about 15 Kgs since I lost saw him. The tattoos and cup marks from traditional medicine treatments dance across his skin as he kicks. As soon as he breaks a sweat, he sits back down and returns to his catatonic state. His twenty boxers return from running. They train on the cement porch in front of Eh’s house. Other than two heavy bags, their only equipment is a pile of moldy boxing gloves laid out on the roof of an abandoned car.

Even overweight and lacking training Eh is a dangerous fighter. In three of his fights against foreigners, he managed to break the opponent’s arm with a kick. Unfortunately, he has only had a few fights in the last several years.

“I really want to fight again.” He tells me. “I never get to fight now.”

One of the main reasons given why Cambodian fighters can’t fight abroad is because Cambodia refuses to join the World Muay Thai Council. Khmers feel that they invented kick boxing and don’t want to support a sport which has taken a Thai name. To circumvent this issue, promoters have come, asking Khmers to fight in the ISKA, American or Australian Kick Boxing leagues.
But even these politically neutral alternatives were rejected by the contract holders. Most people believe that corruption is keeping Cambodian fighters down. If Cambodian fighters start6ed fighting outside of the country, then local promoters and managers would lose the stranglehold they exert over them.

Now, in Japan, the K-1, the Super Bowl of kick boxing with prizes in the hundreds of thousands of dollars, is holding tournaments, aimed at South East Asian fighters, with weight limits as low as 70 Kgs. Either Eh or Oed Phou Thoung could qualify, but they both believed they would never be given the chance.

“We don’t know how to go there and fight.” Said Eh. “We need sponsors. And no one knows who we are.”

When I told Eh Phou Thoung how famous he is on the internet and what a great hero he is to verseas Khmers, he didn’t believe me.

The only time I saw Eh Phou Thoung is when he is training his five year old son. The little boy works the bag with his legs, throwing tiny little knee kicks. When he punches the bag, he shakes the pain out of his hands.
He is cute, and with Eh for a father, he will be a great fighter. But for what? There is no future for boxers in Cambodia. Which is a sad realization because boxing is the national sport.

“I am fighting tomorrow.” He says, out of the blue. It was a charity event, sponsored by Wild Aid, to raise awareness and protect endangered species.

“Oed is fighting in Australia.” He was referring to his younger brother Oed Phou Thoung, who is a brilliant fighter in his own right. “He’s coming home tomorrow.”

The next day, I stopped by the house to talk to the 26 year old Oed Phou Thoung, the four time champion at 67 Kgs. Oed has had over 200 fights since he was ten years old. When I asked him how he got permission to go fight in Australia, he laughed.

According to Oed, in Australia a lot of people were waiting for him to fight, but the fight had been cancelled twice, by the power people in Cambodia. As a result, ticket sales were poor for this fight, since people didn’t believe it was going to happen.

Although Oed helps train the fighters at Eh Phou Thoung’s gym, his brother is not his manager. His contract is held by someone else, and he is only permitted to fight on TV 5. He is also not permitted to fight or leave the country without permission.

In Australia Oed Phou Thoung won his bout and earned a purse of $500 Australian after deductions for passport and visa. “But this is good compared to Cambodia.” He assured me. “In Cambodia , when I fight a foreigner I gets $300. If I fight a Khmer, I only get $150.”

He said the hardest thing about the Australia fight was fatigue, as he arrived and fought the very next day.

“In Cambodia I can only fight about once every three months. So, the money is very little.”

“The problem is when the sponsors send money from abroad it doesn’t reach me.” It only reaches the boss. “That’s why we only have two boxing sacks to train twenty fighters.”

Oed said that in a perfect world he would get to fight and then rest two or three days before fighting again. I told him that in other countries, fighters only fought once every few months. I asked if he had heard of Muhammad Ali. He said that he had. He was shocked when I told him that Muhammad Ali had only about 55 fights in his life. Oed had had more than that by his 18th birthday. And his combined earnings for his entire career probably amounted to only a few thousand dollars.

To make ends meet, Oed worked as part of the crew at TV 5, helping the doctor with injured fighters.

“One boxer, Phin Sophal, committed suicide.” Said Oed, sadly. “He had been very famous, with a lot of fights. He drank and took drugs, then cut his own throat. They took him to the hospital and the doctors saved him. But the wound reopened and he died.”

Things are hard for fighters everywhere. And the ring is full of sad stories. But the hopeless situation facing Khmer boxers is unparalleled in any other country.

Oed got up and worked the bag, pow, pow, pow, slap, slap, bang. The whole house shook as his knee left deep dents in its surface. His knees were clearly as well developed as his shins. Every muscle in his body was absolutely taught, perfectly trained.

Unlike his brother, Oed was still training. He had a glimmer of hope in his eye. Maybe his unauthorized trip to fight in Australia set a precedent. Maybe he would take control of his life and make some serious money. Or, maybe at age 26, his prime was past, and he was doing too little too late. Maybe he would manage Eh Phou Thoung’s young son, and help raise him to be a champion on the international circuit.

Either way, Cambodian had missed a great PR opportunity and had squandered a national treasure.