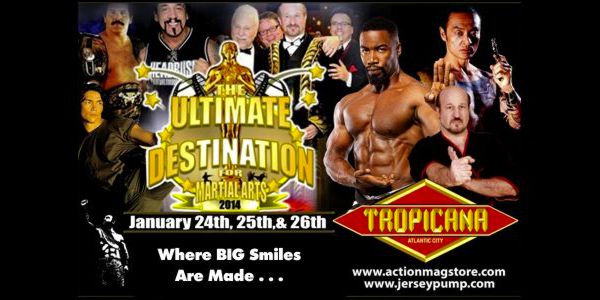 As anyone in the martial arts knows, martial artists share a common bond and it is a deep bond. We all love and cherish what we do. We are always students of the arts and we love to share the new things we are learning with anyone who will listen.

Well, Alan Goldberg’s Mega Martial Arts Weekend allowed us to share in so many exciting ways. The trade show was the hub of the event and it allowed us to congregate together all day long to share our adventures in the arts. There were businesses of every kind, people from everywhere and smiles that never ceased. You could buy books and canes and jewelry, nutritional drinks and supplements to help with your workouts and your general health. There were martial arts t-shirts and gear and, of course, so many top notch martial arts instructors sharing their DVD’s and books to help you improve your arts.

At Alan Goldberg’s Mega Martial Arts Weekend, the seminars were beyond top notch with so many world renown instructors that it made it impossible to choose where to go. There were classes in just about everything imaginable, weapons, karate and combat arts, tying and cutting, dicing, chopping and peeling, kicking and stomping and, of course, healing, and it was all martial arts. Cloning was invented for just such an event, because you didn’t want to miss anything.

There were casting calls and film and TV personalities galore and martial arts television companies filming and interviewing.  (Links to videos coming soon.) There were book publishers sharing different kinds of books, and magazine publishers, who work daily to improve their publications so you can enjoy reading and learning from their excellent articles and photos.

There was breakfast and dinners and dancing and and and . . . the Hall of Honors, where not one person was left out, even us journalist were honored!!!

There was only one really BIG issue with Alan Goldberg’s Mega Martial Arts Weekend. There was so much to do and to see and to participate in and not enough time to do it all. You really have to attend this event to get the BIG picture, and I guarantee you will leave with new and renewed friendships. You will be invigorated and your ear to ear smile will last until next years event!!!

I had so much fun at Alan Goldberg’s Mega Martial Arts Weekend . The event energized my love for the martial arts and the people who love and live the martial arts. I cannot thank Alan Goldberg enough for allowing me to be part of this wonderful weekend. There was so much to do and see and participate in that I am overwhelmed in trying to share the “MEGAness” of it all!!!
~ Dana Stamos

National Martial Arts Day at AT&T Stadium – Home of the...