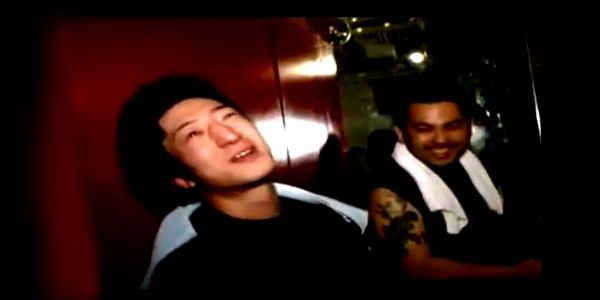 A Lesson in Perseverance, or Proof that Talent Means Nothing Robert M. Clyne, host of “The Art of Fighting,” made this incredible video about his friend and loosing fighter, Hide, who lives in Tokyo. Hearing what Robert has to say about Hide, I came off lucky in my appearances on The Art of Fighting.

“Hide is what most people consider a looser. He works as a dishwasher. He is not very handsome. The police don’t like him. He dropped out of school. He has almost never had a girlfriend. He doesn’t have cool clothes or tattoos. He’s not very athletic, and he’s actually a pretty skilless fighter.” “But Hide has heart. That is something you can’t buy and you can’t fake. ~ Robert Clyne on “The Art of Fighting”

Out of all the episodes of “Fight Japan” and “The Art of Fighting” I relate to the Hide character the most. For some reason, certain people are just dealt a lesser hand from the start. Things are always harder on these people. But whether you have innate talent or not, life is all about what you, yourself do with it. Watch: The Art of Fighting: Hide-its the fight in the dog! http://youtu.be/tOAmz-7PHDM When the chips are down and the deck is stacked against you, when you have nothing left, remember that there is always a chance. There is always an “if”, the most powerful word on the planet. Fail the first one hundred times but come back and win the hundred-and-first“If you can dream – and not make dreams your master;

If you can think – and not make thoughts your aim; If you can meet with Triumph and Disaster And treat those two impostors just the same;” ~ “If,” by Rudyard Kipling

Dream and push through, make your dreams a reality, and you have won. The winnings are tallied at the end of the fight, not at beginning of round one. Talent is the same as capacity. It means that all thing being equal, the talented person should find it easier to succeed. It doesn’t mean that he will. The white belt who never quits eventually becomes the black belt. And it has NOTHING to do with talent. Countless people write to me on the internet and tell me how they believe themselves to be talented language learners, or that they have this or that innate advantage for learning foreign language. And they may have a greater capacity or a more probable rate of success, and yet NONE of them speak eight languages. The vast majority haven’t mastered even a single second-language. Talent should just make the trip easier and shorter, but you still have to complete it, which is the point that most people fail to see and the point which separates a looser from a winner. There are countless people with lots of talent standing in bread lines.

“Nothing in the world can take the place of persistence. Talent will not; nothing is more common than unsuccessful men with talent. Genius will not; unrewarded genius is almost a proverb. Education will not; the world is full of educated derelicts. Persistence and determination are omnipotent. The slogan press on has solved and always will solve the problems of the human race. No person was ever honored for what he received. Honor has been the reward for what he gave.” ~ John Calvin Coolidge

And finally, no matter how badly you fail. No matter what advantages the other guy has, don’t let anyone take your dreams. Never stop dreaming. No one owns you, and no one has the right to dictate what happens in your head. You own your dreams. Dream big, but then make your dreams a reality. Dream a hundred dreams and complete two of them and you have doubled the success of the average person.

“All men dream, but not equally. Those who dream by night in the dusty recesses of their minds wake in the day to find that it was vanity; but the dreamers of the day are dangerous men, for they may act their dreams with open eyes, to make it possible. This I did.” ~ T. E. Lawrence (from Seven Pillars) (also known as Lawrence of Arabia)

This my friend Hide. Not the most talented fighter but definitely one of the bravest. Watch his climb from victim to Brawla’ The reedit is by the young Andy Koji.