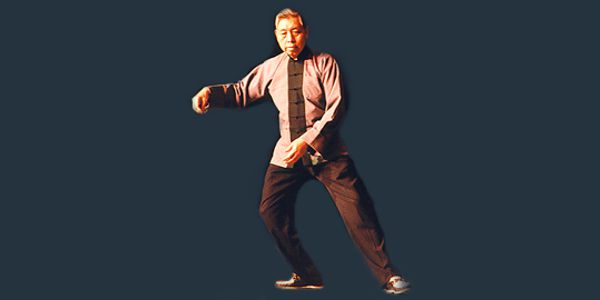 Master B P Chan passed away Sunday morning at 9:35am, March 17, 2010. He taught at the William C.C. Chen School of Tai Chi for 27 years. He was 80 years old and teaching up until 2 weeks before his passing, which was gentle and completely accepted. Master Chan was laid to rest yesterday with a combined Roman Catholic and Buddhist ceremony. Although many of us will carry on his teachings within our own amalgamations, Master Chan’s successor who will carry on his teachings in their pure form is Sifu Michael Benaman.

Master B.P. Chan was the most humble martial arts teacher that I have ever come into contact with and in fact hated to be called even a teacher, much less a master. He asked all of his students to simply call him Mr. Chan and at least once a class, every class, would say, “Remember that I’m not teaching you. We are just practicing together.” He also almost never said anything about who his teachers were or where he learned his arts. On the other hand he was a walking Chinese Martial Arts Encyclopedia, knowing and at different times teaching Yang and Chen Styles of Tai Chi, Pa Kua Chang, Hsing I Chuan, a number of Chi Kung Sets, and a number of different Shaolin Styles from his home in Fujian. He did tell us that he began his martial studies with a friend of his father’s who taught a local style, when Mr. Chan was 10 years old. He also mentioned once that his Pa Kua style was that of Chiang Jung Chiao and that he learned some of his Hsing I in the Chinese army. As his students we noticed that his Hsing I seemed very similar to that of Sun Lu Tang and that Mr. Chan seemed to have a very deep respect for Wang Hsiang Zai. Chan always taught his students that martial arts were for preserving health and peace of mind and said that he had never been in a fight — but that the Second World War and the time that the two guys tried to mug him in Manila didn’t count. He and his family apparently had moved to Manila to escape the Japanese during the Sino-Japanese war of the late 1930’s and got there just in time to live under the Japanese occupation of the Second World War. During his years in Manila, Mr. Chan taught for 3 hours every morning in the park before going to work in his father’s used furniture store, a store that he often referred to as, “Not the biggest, not the best, The Only Used Furniture Store in Manila!” After coming to New York in the mid-1970’s he taught for The William C.C. Chen Tai Chi School and other various venues around the New York area, right up until a couple of weeks before his death. He was especially noted for how much he loved Master Jou’s Tai Chi Farm and the time he spent there teaching and working on the facilities with his students. B.P. Chan was one of the last of that rare breed of simple and humble kungfu masters, [as much as he hated being called a master], and he will be sorely missed by everyone who he ever came into contact with.

USAdojo - December 27, 2017
We use cookies to ensure that we give you the best experience on our website. If you continue to use this site we will assume that you are happy with it.OkRead more