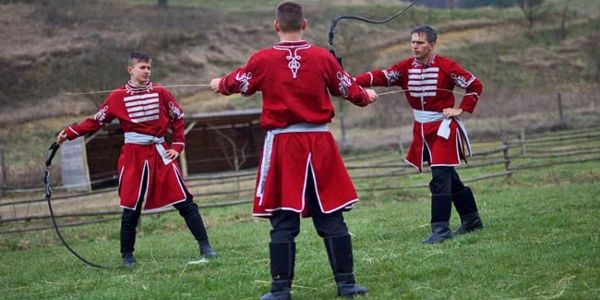 Baranta martial arts involves both armed and unarmed techniques and is based on the martial training forms of the old Hungarians, who lived between the 19 and the 20 Century. In addition to the motion culture of the Carpathian-basin, the martial methods applied by folks, who established similar social communities to those of the Hungarians (schytians, avars, türks onugors, kazaks) and who once lived along the assumed wandering route of the ancient Hungarians, also play a significant role.

Foreign monarchs (primarily the Habsburg dynasty) played a major role in the devolution of the motion culture and techniques of Baranta with their prohibitive and restrictive laws on wrestling, brawling, fencing, archery and horse riding. Thus Baranta could only survive in martial dances, in the lifestyle of Hungarian shepherds, in fencing books, and on artistic representations.

Baranta stems from those members of the Hungarian society, who lived in the initial times of Hungarian history and who had a liberal legal state, which came with the privilege and at the same time with the duty to fight. This fighter layer of the society mastered the military profession and applied specific training systems and tactical principles and is the premise of the fighting (noble) orders and groups, who were presents in Hungarian history for centuries.

The trainers and leaders of these military alignments regulated the order of the martial preparation of individuals and troops trough edicts. The ’kölpény’-s, ’kaplony’-s, ’talmács’-es, corporals, captains, the civilis, serfs bound to specific servitude (iobagio castri and iobagiones exemti), the professional fighters (pugils), the guardians of the ’gyepu’ (a Hungarian word for border territory), the guards (speculator), the nobles (nobilis), ethnic groups who settled in Hungary and who were bound to military servitude and thus gained certain privilege, the besenyos, the böszörmény-s (or muslins), kuns, jászes, the traditionally fighting Hungarian ethnic groups (szeklers, inhabitants of the Orség, and the hajdús),the mixed nationality task forces (nyogérs, shooters, royal hunters, Russian bodyguards, the order of soldiers garrisoning castles on the borders, cavalrymen), all these military groups show, that in Hungarian history, the presence of military professionals and their influence on political life and culture covers at least one and a half thousand years.

All this means that similarly to the Japanese, Turkish, polish, and Russian state system, groups of the Hungarians also took on military duty as a lifestyle for centuries including training, and the physical and spiritual development of martial knowledge.

Baranta is primarily based on their knowledge and their life philosophy, which evolved for centuries. They are the predecessors in title of Baranta. Organized Hungarian martial culture was between the VII. and XVII century at its blossoms. We separate three significant times within Baranta: 1. Time of the wandering state 2. Time of the Árpád dynasty 3. Time of Turkish-Hungarian wars. From the first part of the XVI. Century Hungarian culture began to split up and develop in different directions. From this time on only folklore preserved specifically Hungarian martial arts elements. Noble culture (including martial culture) began to adapt to western traditions. Hungarian martial related knowledge drifted to the periphery of society.

Several attempts were made to resurrect this Hungarian martial art. During the two world wars Hungarian military officers assembled the first formidable material, which was meant to increase combat skills and devotion towards national traditions among the crew. A few elements of the results of this research even appeared in contemporary military regulations.

These attempts also continued in the sixties to elaborate a unified and homogenous motion material and martial approach, but it couldn’t compete with the sweep and popularity of oriental martial art styles. Some very serious research began to take shape in the eighties in a pair of institutions and as a result in 1993 the basics of a new sport have been laid down at the Lajos Kossuth military college.

In 1997 the Baranta league was formed (it’s symbol is the Rakamazian turulbird), in 1998 the first Hungarian championship took place. Study tours made by helpers and researchers of Baranta to Mongolia and Kazakhstan played an important role in the development of the sport, as did Mongolian and Turkish masters who expanded the range of grip techniques of Baranta with some Middle-Asian ones.

Today the best horseback archers of the world are Hungarians once again. The visit of Dr Imre Harnos 10dan style founding master was also a big step forward, since as a result the majority of the leading Hungarian Zen Bu Kan Kempo clubs started a Baranta section. In 1999, the first rank and exam regulations were set up based on the ancient decimal system of the Middle-Asian nomadic folks. Baranta fighters gain ancient Hungarian animal names as a rank (based on the strength of the animal) after each successful exam. Baranta researches the possibilities of a warrior with complex attributes, thus it places equal stress on ranged and melee weapons, and on unarmed combat. To gain the fifth rank (the ‘Bars-oktur’ rank, which entitles the candidate to teach), one has to fulfil the minimum requirements in 34 different exam elements.

Today Baranta is an independent Hungarian martial art style. The original meaning of the word is: to prepare for battle, campaign or raid. In the neighbouring countries around Hungary, the word means looting. Among the Caucasian folks it means to settle a conflict in an aggressive way but without bloodshed, or it can also mean a martial contest. Baranta may also mean the rightful gain of booty without any victims (consequences of violating the law, or offending a person). The traditional Hungarian martial art is called Baranta until it is meant to act as a contest, preparation or training in peacetime. If it’s aim is to actually destroy the enemy it is called Böllön. During the training, the Böllön related techniques may primarily be mastered by professional soldiers or by Baranta fighters who reach the level of a master.

Baranta accepts the traditional Hungarian view of life. This kind of thinking (in Hungarian it is called ‘Szeres’ thinking) stresses the importance of coordinated social links. The man who follows the traditional principles in his life strives to get to know himself, and to define himself first, and after he has done this, he coordinates himself to the order of the existing world around him. Today’s man builds up his personality subordinated to the world around him, this way he can never become truly himself, and as such, he doesn’t posses a unique personality. Without the latter he is not suitable for a grown up man nor for warrior. Baranta fighters are not educated to become armed specialists, but to become warriors with complex abilities. This means, that in addition to the handling of ranged and melee weapons, unarmed and mounted combat, Baranta strives to grant the candidate the achievements of several thousand years of Hungarian culture. In addition to the Hungarian martial dances and folklore (rhymes, legends and sagas), the mysteries of weapon making, practical archaeology and History, they also learn about the traditional Hungarian way of living one’s life.

One of the most important aims of a Baranta warrior is (while familiarizing others with the elements of traditional Hungarian martial culture and making the independent martial system of Baranta as effective as possible) to popularise Hungarian culture, and the nature and human respecting Hungarian self image worldwide, just as making Baranta one of the most popular martial art styles in Hungary and later in the whole world. The major directions of this expansion are the territories of fellow folks living in Middle Asia. The system of Baranta respects individual initiative, develops and promotes creativity and thus leads to faster learning achievements. This is true in case of motion processes as well, as in case of opportunities to develop one’s personality.

During preparation and contests, traditional training methods are applied, which are possibly closest to realistic combat situations. Basic training elements (school and form exercises which are similar to the kata in oriental martial arts) are assembled in a way, that in the exercise an enemy is always involved as well as some security elements to minimize the chance of an injury. Baranta consists of grunt (THUG: named after the horsetail flag of the bodyguards of the leaders of the ancient clans, who also endowed infantry tasks) and mounted (RÁRÓ: basic mounted units) capabilities.

A fundamental feature of Baranta is that it simulates real combat with its sportive training and contest system. During unarmed combat a Baranta fighter strives to close in on his enemy as fast as possible, where he lays him out with strangulating locks, and spine locks which cause intense pain. In fencing, he tries to overcome his enemy using a wide variety of following and complementary moves in a delaying nature (he doesn’t focus only on the weapon). Tactical and logical analysis of a situation is especially stressed.

During the training and contests, the representatives of this style give account of how they can handle the bow, sabre, sword, spontoon, lance, spear, battle cross, staves with various length, dagger, lasso, shield, and axe. Horses have a specific role; to be familiar with them is compulsory even for grunts. Baranta fighters do not train the horse, instead they learn to live and work together with it.

In Baranta there are no real weight and age groups, since there are none in real combat either. In a contest boys under 17 (‘Kese’ or beardless), men above 17 (Öskü or grown up), and girls above 13 (‘weasel’ category) are separated into categories. In ancient times girls counted as biologically mature from the age of 13, and boys were initiated into manhood with a ceremony at the age of 17. The three age categories are based on these customs.

In Baranta, shows also play an important role. Associations and clubs perform 50-220 times a year in Hungary and abroad in tradition preserving shows. Part of these shows is a tradition preserving performance the other part is a martial arts performance. Today 6 sport associations and 4 clubs have a functioning Baranta section. Roughly 200-250 persons are participating in the trainings. About 30 are able to compete on contests and 12-14 are able to represent Baranta on an outstanding level even against prominent representatives of other martial arts.

One of the greatest test of the ‘resurrection process between 1929-41, 1967-78 and 1992-2004 is to realise the education of trainers. In 2002 Baranta got into the basic national curriculum (catholic high schools), from 2004 it is a facultative subject on the Miklós Zrínyi University for Defence. The two central associations of the training are the Horseback Archery Traditions Preserving Sports Association, which is functioning in Szentendre, and the Honvéd ZHSE Baranta section in Budapest. At present contestants visit our championships from Slovakia, Ukraine, Romania, and Mongolia.

The Value of Focus for Children

How Tae Kwon Do Won the West Part Two