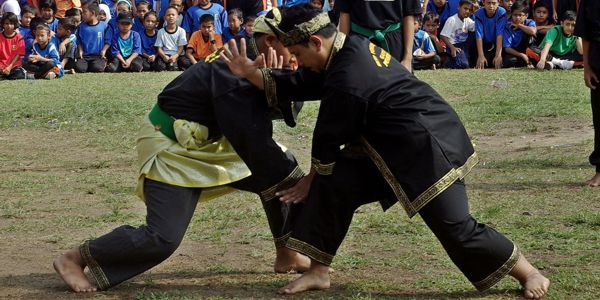 Bersilat means “to do fighting” and this Malaysian martial art is similar to Pentjak Silat, an Indonesian martial art, which it is thought to have derived from. It is a self defense system dating from the fifteenth century. There are several schools of Bersilat, each with two branches, one for public display and one for combat. Silat pulat is a dance-like art, usually performed at weddings and other festivities. Silat buah is for combat. Some schools emphasize unarmed combat while others focus on weapons usa. Minangkabau is the name of the woman who introduced the art, which imitates the movement of animals like Chinese styles do. Bersilat emphasizes leg techniques, but punches, throws and holds are so important. Students are forbidden to divulge secrets and training is often handed down from family member to family member. The art has both a sport side and a spiritual side. The most important styles of Bersilat are Chekak, Kelantan, Lintan, Medan, Peninjuan, and Terelak.

MEDAN Style of Bersilat; weapons are used in mass fighting.

SILAT BUAH Secondary form of Malaysian Bersilat, used in actual combat. Generally practiced in semi-seclusion, its moves are passed from master to disciple under a vow of secrecy, reminiscent of Chinese kung-fu. Various forms of Silat Buah can be found throughout the narrow peninsula of Malaysia, but the most popular forms are fist and finger attacking, grappling and gripping, and a spectacular style with high leaps and flying kicks.

TERELAK style of Bersilat; breathing is stressed and great strength is required.

This Malaysian martial art focuses on seven basic groups of techniques that are practiced faithfully and must be mastered by each practitioner. they are: