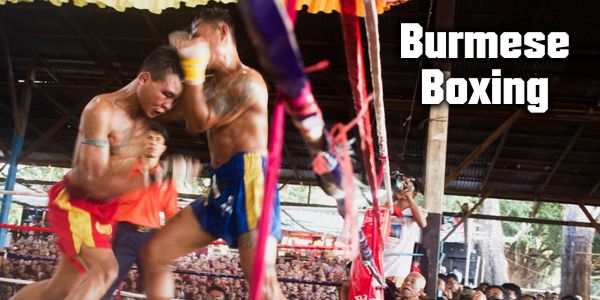 This hard, offensive style of martial arts is the opposite of the Burmese style of self-defense called Bando. It is also known as Lethwei. Burmese boxing is similar to Thai boxing. Most Burmese boxers are farmers. The Shan dance, called the fight dance, which is still seen today, is really a method of training for actual combat. Burmese boxers train alone or with a partner, but there is no equipment like heavy bags. Practitioners are divided into four groups: youth, novice, intermediate and professional, but there are no weight classifications. Promotion from one category to the next occurs as a result of contest wins. A contest consists of four untimed rounds. A blow that delivers a visible shock or an effective grappling technique will end a round, except for the last round, which goes on until one participant is bloodied, gives up, or is knocked out. Blood must result from a head wound, so most attacks are aimed high.