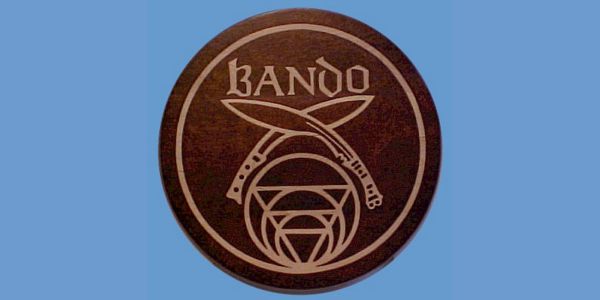 Despite the Chinese influences, Bando is credited as a style of armed and unarmed combat native to Burma. It is an assimilation of Karate-like striking and kicking techniques, Judo-like throwing techniques, swordplay and fighting with knives, spears and sticks. It is also known as Bando-Thaing or Burmese Boxing.

There are numerous interpretations of the term Bando, and different linguistic and ethnic groups hold to diverse translations. It is generally interpreted in three ways:

Some Bando groups have combined all three translations in one, making it similar to the Japanese term Budo (stop conflict), the Chinese word Wu Shu (war art), or the English terms military arts or martial arts. Some etymologists believe the term Bando derives from Chinese, while others claim Indian or even Tibetan origins. Bando is also called “Thaing.”

There are many styles of Bando, but most follow basic instructional patterns. The art emphasizes initial withdrawal followed by an attack outside the opponent’s reach. All parts of the body are employed in these attacks, and once the initial technique is delivered, grappling and locking techniques are used. Techniques are learned first through formal exercises in some systems and only later through sparring.

When the Japanese invaded Burma in 1942, they encouraged the practice and proliferation of Bando and influenced it by exchanging techniques from Judo, Jujutsu, and Aikido. After World War II, Bando was furthered through a large number of competitions.

Bando was introduced in the U.S. by Dr. Maung Gyi, a college professor who began teaching the art on April 3, 1960, in Washington, D.C. Later, Bando classes were formally conducted at American University until the fall of 1966. Dr. Gyi organized the American Bando Association on June 15, 1968, at Ohio University. Members present at this initiation ceremony took a blood oath.

The International Bando Association was officially formed on March 9, 1946, by U Ba Than, then director of physical education and athletics for the Union of Burma. The IBA was organized in honor of those servicemen who fought and died in the China-Burma-India theater of World War II.