Blood running down into the eyes can blind you during a fight. Blood running down over the lips feels disgusting and many fighters dislike the sensation so much that they take the time to wipe their lips with their forearm right in the middle of a fight. Blood in the nose being inhaled can cause the gag reflex and make it uncomfortable to breath. Getting slugged or kicked in the face and blood flowing in a fight is a very real possibility and those not used to these sensations may be at a disadvantage when this precious liquid is flowing. To put it mildly, it is very inconvenient.

In some of my Jim Wagner Reality-Based Personal Protection courses, when students are wearing boxing gloves in preparation for light-contact scenarios, I will secretly dab some stage blood on one of the student’s boxing gloves; gloves which are black to conceal the red color. When the trainer with the stage blood on the gloves punches the trainee in the face the stage blood is transferred to “victim.” Many times this freaks out the student receiving the punch when they realize that they are “bleeding.” Often times you can see the shock in their eyes. It’s the look of, “I’m hurt!” for nobody likes to see themselves injured. Also, those students observing the scenario often times shout out, “You’re bleeding, you’re bleeding!” thinking that it is real. If this happens bark out a Jump Command, “It’s nothing! Keep fighting!” For a moment everyone is a bit confused except the trainer who knows that the blood is artificial. I force students to deal with different issues like this. 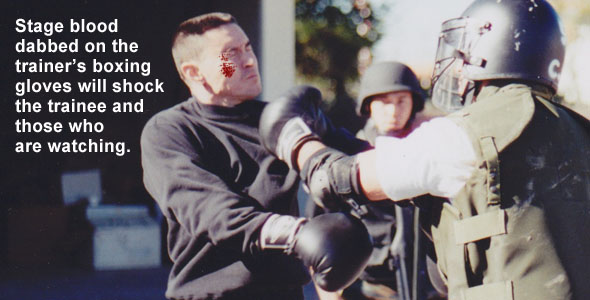 It’s interesting to see how students who have never had blood on their faces react to it, which is exactly the point. I can’t have my students actually injure each other, that would be dangerous and irresponsible, but by introducing stage blood into the training I prepare them both physically and psychologically for the future in which they may have real blood pouring down their faces one day. That’s my job. That’s what I do – prepare people for real conflict.

Everyone who has taken my one-day Knife Survival course has also used the stage blood when doing knife disarm scenarios. The attacker is slashing and stabbing away at the trainee in the corner of a room or up against the wall and the trainee, who had stage blood poured into their hands prior to the scenario, must try to disarm the attacker with slippery blood soaked hands. Most of the time it is impossible to get the knife away, and so hit-and-run tactics are usually more successful. I use stage blood in this type of knife fighting training because in a real knife attack you can count on blood being part of the equation.

Since I was the first civilian martial arts instructor to introduce stage blood to self-defense training, where did I come up with the idea? I first started using stage blood around 1989 for first aid training. Starting in 1990 when I was on the Costa Mesa Police Department SWAT team, and then a few years later with the Orange County Sheriff’s Department Dignitary Protection Unit, I was asked to set up a many scenarios for many police agencies across the country. As tactical teams were first introducing the concept of Tactical Medics onto their teams I was asked to set up realistic scenarios that involved wounded victims or downed officers. Although I was not a medic myself I knew the conditions that the medics would be working under and so I created the “hot zone” and “warm zone” environments that they needed to perfect their skills. After a few years of applying moulage and stage blood to my “wounded” actors the thought suddenly came to me one day, “Not only are these special effects good for creating the illusion of conflict injuries, but I can take it a step further during the actual fight for my defensive tactics students (police) and my Combatives students (military).” That’s when I came up with the ideas for using stage blood in knife training and hand-to-hand combat. On January 21, 2003 when I expanded my teachings to civilians other martial arts systems and schools adopted my training ideas. Yet, here we are a decade later and it still amazes me how few martial arts schools don’t incorporate stage blood into their training; as if their students will never be injured or bleed in a real life conflict. It is said that, “90% of a fight is mental, and 10% physical.” Stage blood prepares students mentally for real combat. It is a vital tool in the Reality-Based Personal Protection system.

Stage blood can be ordered from any theatrical supply store or Halloween store, and you should always have a bottle or two in stock for your own training. Usually the more expensive brands stain the skin and hands less, and so I use only the quality products. I test them first, to see if they have the color and consistency of real blood, otherwise you will not get the real feel or effect.

Handgun Disarms: The Gas Alone From A Pistol Can Kill You

Jim Wagner - July 17, 2012
We use cookies to ensure that we give you the best experience on our website. If you continue to use this site we will assume that you are happy with it.OkRead more