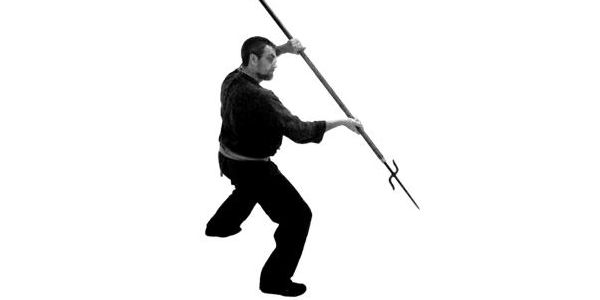 In Isshin-ryu we have three bo (long staff) kata. About 20 years ago I was pondering a particular characteristic of one of them. Let me see if I can explain this for you – If you marked one of a bo “right”, the other end “left”, and held it so that you had the “right” half in your right hand and the “left” half in your left hand, you could do two of the kata (Tokumine-no-kun & Urashi-no-kun) and your hands would stay on the proper side. In other words, these kata treat both ends of the bo as equal – when left side is forward, the “left” side of the bo is forward, and vice versa. This is what is known as “double end staff.”

However, in our third kata, called Shishi-no-kun-dai, it is different. This time, mark one end as “front” and the other as “back.” If you were to start the kata so that your right hand is on the front half of the weapon, you would find that whenever the right side is forward, the “front” is in the right hand, and whenever left side is forward the “front” is in the left hand. This means that, in Shishi-no-kun-dai, one end of the bo is clearly the front and the other the back.

So, I was pondering this, and I asked myself, “What’s special about the front end? Maybe that end is different somehow? What weapons are different on one end?” I considered the usual suspects, spear (yari), halberd (naginata), etc. But, among the uniquely Okinawan weapons, the one that stands out is called nunti-bo.

Nunti-bo (nunti bo) is basically a bo with a sai on the end. But, the sai is a particular type of sai called nunti-sai, or manji-sai, which has a hook on one side, and a tine on the other. Attach it to the end of a bo, and you have a nunti bo. There has never been much material on the use of nunti-bo, but the few examples I have seen treat the weapon like a bo, with the extra benefit that the tine is used to catch an incoming strike in order to redirect an attack.

Anyway, there I was, those twenty or so years ago, performing Shishi-no-kun-dai, and imagining my bo was a nunti-bo. What happened was thrilling and terrifying. Instantly, all the movements of the kata made devastating sense; and instantly, I saw that nunti-bo was used in a manner which looked nothing like what people showed. And I became actually sick to my stomach. I was so accustomed to the “coolness” of martial arts, that I was unprepared for the brutal cruelty of weapon-based combat which the kata Shishi-no-kun-dai disclosed. Weapons work is for maiming and killing, pure and simple.

It took a few days for me to recover from the sense of revulsion I experienced, so that I could try my little thought experiment again (with the same results, the kata made absolute sense). So, I purchased a nunti-bo, and started practicing Shishi-no-kun-dai. With my imagination replaced by the actual implement, the kata revealed subtleties of handling that I hadn’t realized by visualization alone.

From that day on, I have practiced Shishi-no-kun-dai with nunti-bo. I have also come to recognize the occasional nunti-bo-specific movements in other bo forms. What has become evident to me is the historical function of these kata.

In feudal societies, there was minimal civilian law enforcement. Individual villages needed the ability to call up militia to deal with marauders and other threats. So, villages had traditional “war dances.” These contained the fundamentals of long-weapons fighting. (By the way, these local dances still exist today – brought out at festival times and performed for crowds, and, of course, they exist as kata practiced in the martial arts.)

So, most “bo” forms are actually “generic long-weapons forms.” And, because the staff is the most common tool available, most of the movements in these long-weapons forms are for the staff. But, villagers had other potential weapons, such as oars, hoes, rakes, etc., so, the forms also had to contain movements which applied to these implements. Once you become familiar with these weapons, you can recognize the specific techniques which don’t work well with the bo, but which are very effective with something else.

If a village had only one kata, it would follow the pattern described. But, if there was more than one kata from that village, the second form was likely to be specific to some other weapon. Knowledge of this second form might be limited to the person who was responsible for transmitting the village bo form to each generation (the village martial arts expert). This individual might also be the only person in the village who possessed a weapon which was actually a weapon, as opposed to a tool utilized for fighting. And, finally, this person might be the local constable. (Like the Japanese jutte, the sai and the nunti-bo functioned as law enforcement weapons and as symbols of legal authority – sai was both side-arm and badge.)

So, for 20 years I have practiced Shishi-no-kun-dai as “Shishi-no-nunti-bo”, always with nunti-bo, instead of staff. As different Isshin-ryu practitioners come to train with me, I have the occasion to show this material to them. The shock of recognition flashes across their faces, and many of them (ok, most of them) purchase nunti-bo for their own training.

With Shishi-no-kun-dai as my nunti-bo teacher, I have learned that, contrary to the usual demonstration of the nunti-bo (as a tool for catching an incoming attack in the tine), it is actually not about the use of the tine much at all (though, there is a nifty sword disarm that is only possible because of the tine, and some clothing entanglement that depends on the tine). Predominantly, nunti-bo is about using the hook.

In a nutshell, the to use nunti-bo is to strike with the wooden portion of the weapon, just behind the metal manji-sai attachment, then pull hard so that the hook pulls into and tears flesh (gross, huh?). One of the most basic nunti-bo movements is downward angle strike (called kesa-uchi or uchi otoshi), pull, then thrust. The strike is aimed at the neck area, the pull digs the hook into the trapezius muscle and brachial plexus, the thrust frees the weapon from the opponent’s body. However, if the opponent blocks the strike, the pull hooks his weapon and pulls him forward, into an oncoming thrust.

That is just one example. But, if you pick up a nunti-bo, and think about the hook, you will see just how devastating a weapon it is. Better yet, learn Shishi-no-kun-dai and let it become your teacher.

Old Karate is About Interpreting Kata