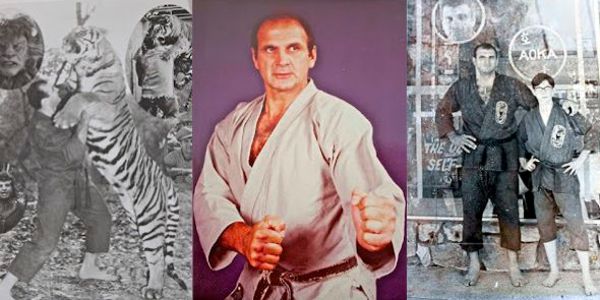 It is with a sad heart that I announce that Bob Ozman, the first karate instructor in the San Fernando Valley, creator of Mushin-Gi-Tai, student of Tatsuo Shimabuku (the founder of Isshin-ryu) friend, teacher, colleague, actor, director, inspiration to a great many martial artists, and my first karate instructor, has died. He was found by his friend and landlord in their Santa Clarita home on Wednesday morning, an apparent victim of the diabetes he’d battled for many years. He had been found unconscious several times previously, when his blood sugar had dropped dangerously low during the night, and he was rushed to the hospital. In this case there was no one nearby to assist him and he died in his sleep. He will be buried in Indiana where some of his family members are still living. Many of his students remained close and visited him often. Rico Rose said this,” I hate this. I had just introduced my own son to Bob a couple of weeks ago. We will all miss him. At least now he can workout again with Johnny Atkinson.”

This is very sad news.  Although I never trained with Bob Ozman, his studio on Van Nuys Blvd. right next to the Ventura freeway on ramp was one of the several dojo windows that I looked through as a teenager in the Valley in the late 1960’s.  I was trying to come up with the courage and the money to walk through the front door.  I didn’t come up with both until I turned 18 and took my truck drivers pay and limited courage into the Chuck Norris Studio on Ventura Blvd. about a quarter mile away.  I fought several of Bob’s students in various tournaments and they were always a problem.

I offer my sincere condolences to you and Bob’s friends, family and students. He was a great man and thoughtfully nuanced martial artist.  May he rest in peace.