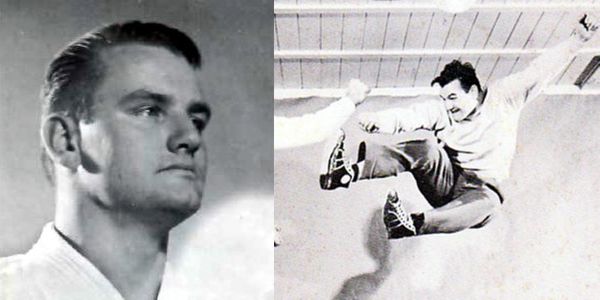 Bruce Tegner was a lifelong martial artist and prolific writer of martial arts books. He had over 80 books in print. He was born on October 29, 1929 in Cook County, Chicago, Illinois and he passed away in 1985 at the age of 56.

Bruce Tegner’s parents were judo and jujutsu instructors and Bruce Tegner was only 2 years old when he began his martial arts training under his parents. During his lifetime he studied judo, jujutsu, aikido, karate, Japanese sword and stick fighting, Savate (French foot and fist fighting), tai chi, and other Chinese kung fu forms.

By the time Bruce Tegner was 21 years old, he had already won California’s State title and he began writing books on judo, jujitsu, aikido, t’ai chi, karate, and kung fu. He included three types of training in his books, training for Sport martial arts, training for Classical martial arts, and Self-Defense training.

Bruce Tegner began training in the traditional and stylized Asian styles of martial arts, but as an adult he became concerned that much of the stylization and formality did not fit into modern self defense. The prevalent belief at the time was that it took a lifetime of rigorous training to become a proficient martial artist, and a martial artist was expected to be an athlete as well. Bruce Tegner acknowledged that these long-held beliefs arose from a history where martial artists were warriors by occupation, fought as a professionals and therefore had to remained athletically fit and prepared for battle. But in modern society people needed to defend themselves, and most are not full time military, so they need practical self-defense.

In a time when even traditional martial arts instruction was very difficult to find, Bruce Tegner set out to teach modern practical self-defense that did not require many years of rigorous physical training or great athletic strength and prowess. An ordinary person did not need to be an athlete in order to defend himself and the simplier the self defense techniques the better. Bruce Tegner taught that there are no pat answers and that the most important weapon we have is our mind.

Bruce Tegner remained consistent with his martial arts roots and many of his books are introductions to the traditional martial arts, but he also integrated the self-defense techniques of judo, jujutsu, and karate into a practical self-defense instructional program he called Jukado. He did not require physical prowess or strength from his students, but he strongly encouraged physical fitness because it improved training and a person’s chances of survival in self-defense situations. He often touted the health benefits of remaing physically fit as well.

Bruce Tegner led an active martial arts career. He instructed U.S. military instructors; devised law enforcement self-defense courses; created fight scenes for film studios, and between 1952 and 1967 he operated his own martial arts dojo in Hollywood, California. Bruce Tegner personally instructed several notable Hollywood actors who found the martial arts instruction useful in their acting careers. The spectacular fight scene between actors Frank Sinatra and Henry Silva in the 1962 movie, Manchurian Candidate, was choreographed by Bruce Tegner. The sequence in this movies is regarded by some to be one of Hollywood’s classic fight scenes. Bruce incorporated both judo and karate-like techniques into the fight scene and the “on-guard stance” adopted by the opponents in the scene is from Bruce Tegner’s own Jukado self-defense system.

Like Bruce Lee, Bruce Tegner encountered opposition and criticism to his ideas of reformatting the highly traditional and stylized elements of martial arts in the search for a practical and more versatile form of modern self-defense. Bruce Tegner and Lee were not iconoclasts as many critics accused. They preferred to think of themselves as modern martial artists who worked to modernize the empty hand martial arts. Although Bruce Tegner wished to create a more practical self defense, he did not minimize dojo traditional or etiquette and continued to respected the dignity and safety of his students.

In recent years modernized, empty hand, self-defense has become more accepted in the martial arts community and is receiving great study in the United States and around the world. But Bruce Tegner did not receive the credit he deserved as one of the great pioneers of the martial arts. After his death from a heart attack on August 28, 1985, in Ventura, California, Tegner was largely forgotten. His books on traditional martial arts and modern self-defense are out of print, but remain available for purchase from private individuals on the Internet.