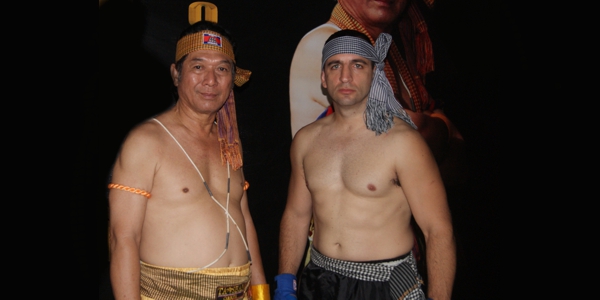 Since the launch of my web TV show, Martial Arts Odyssey, more than 18 months ago, I have received a lot of email asking about Cambodian and Thai Martial Arts, what they are, and which is better.

This is just a brief overview to help people understand the martial arts of Cambodia and Thailand. You can also google my name, plus the words “Khmer martial arts” or Muay Thai and find more in-depth stories I have done on those arts. Also, you can see Martial Arts Odyssey on FightCon.com, for free. Or you can get some of my books on amazon.com.

2. Bokator (Boxkator) which is an all encompassing ancient fighting art, includes punches, kicks, knees, elbows, grappling, ground fighting, and weapons. The practitioners fight without gloves. Their hands are wrapped with ropes or traditional krama scarves.

3. Japbab Boran Khmer (Khmer wrestling) The least practiced of the Khmer martial arts. There are a handful of wrestling clubs country wide. They meet annually for the national wrestling competition, which is a big spectator event. In Khmer wrestling, the goal is to force the opponent’s back onto the ground.

There are numerous Khmer words which mean fighting or martial art Khorm Yuth, Labok Katao, Kbach Kun Khmer, Wy Khun, Yuthakun, Yuth….but it is all either Bokator or Bradal Serey. One more name I found on the web was Kbach Kun Dambong Veng, which just means short Khmer fighting stick. It is not a separate art but just a small piece of Bokator. Over the last five years, I have met, interviewed, photographed and trained with nearly every single Khmer Bokator master except for two or three who I plan to go see when I return to Cambodia.

Grand Master San Kim Saen opened his school in Phnom Penh, which is the largest Bokator club in Cambodia. He has had literally thousands of students in the last few years alone. Most of the other masters I visited had at most twenty students, many of whom weren’t active. Grand Master spent years codifying the system, writing it down, photographing it, and collecting styles and movements from everywhere. The other masters all had their specialty, such as sword or stick or kick boxing, but San Kim Saen was the only one with the complete style.

By traveling to various small Bokator clubs around the country you can learn various techniques, but you can learn literally all of them at the club in Phnom Penh.

No one knows the exact age of Bokator. The first known reference to Bokator is in the carvings on the walls of Angkor Wat Temple, made between 900 and 1,000 years ago. Anything else about the origin and history of the art is legend, theory and conjecture. The first articles written about the art are only a few years old.

Bradal Serey probably had very distinct styles at one time, but since the Khmer Rouge killed most of the masters and practitioners, the few who survived have had to build up the art from nothing. As a result, Bradal Serey is pretty much homogenous throughout the country. Also, as it is a competitive, professional fighting sport, it is subjected to rules, which fairly standardize the art. There are differences from teacher to teacher, but these are more because of personalities, methods…not truly codified style differences.

In Thailand there are two martial arts, Muay Thai and Krabi Krabong. If you would consider Muay Thai Boran a separate art, then Thailand has three arts.

There are countless styles of Muay Thai depending on which part of the country you come from and which master you follow, but it is all Muay Thai. When they fight professionally the rules are the same.

Some styles, such as Muay Chaya are very old, and there are written documents dating back several hundred years. Others, such as Muay Thai Sangha, a religious form of Muay Thai, are fairly new, with the founder still living.

As a side note, there has been much debate as to whether Tony Jaa is Khmer or Thai and if his art is Bokator or Boran. There are even rumors he trained in Cambodia. To find the answer, I traveled to Khmer Surin province, Thailand, where I sought out and trained with Jaa’s first teacher, Sok Chai. Accompanied by Khmer monk friends, I also visited his house and interviewed his parents. We went to the elephant village where Jaa was born and explored the temple where his father had been a monk.

The answer is, Jaa is from Khmer Surin, so he and his parents speak Khmer.

In fact, our interview was conducted in Khmer. His ethnicity however, will probably be a shock to all but die-hard fans. He is a member of the Kuy tribe, who are the royal elephant keepers, who have served His Majesty, the King of Thailand for generations. Jaa’s father confirmed that Jaa’s first visit to Cambodia was tied to the release of the film “Ang Bak,” So, there is no way he could have studied Bokator in Cambodia before becoming fanmous. I also interviewed nearly every master in Cambodia, all of whom confirmed that Jaa was never their student. Finally, his first teacher, Ajan Sok Chai, who is also from Surin, is ethnic Thai, not Khmer. He taught Tony Jaa Muay Thai Boran and movie fighting.

Saddly. it is nearly 100% certain that Jaa has never studied, and possibly, never heard of Bokator.

Khmers believe that Muay Thai Boran was stolen from Bokator and this would explain similarities between the arts. No one knows for sure, but what is certain is that knowledge and borrowing of culture and martial arts flowed in both directions across the Thai-Cambodian border. It is unlikely that there was ever a time that one or the other of these two countries didn’t have some type of fighting system.

With the possible exception of a very large sword academy outside of Bangkok, Muay Thai Boran and Krabi Krabong are taught as extras at Muay Thai camps and schools. Because there are no professional fights in these two arts, fighters can’t afford to spend a lot of time learning them. Most only pick up a few moves and spend their energy and time concentrating on the money art, Muay Thai.

Many traditionalist Muay Thai trainers teach their students legal Muay Thai Boran moves because they believe that the old ways are the most lethal in the ring. Famous people who fall into this category include Prah Khru Bah Neua Chai Kositto, Thailand’s last warrior monk, who I trained with at Wat Acha Thong. The fighetrs learn the Boran style, but then get in a real professional ring and fight for money. Another exception was Kru Pedro, who founded Muay Thai Sangha. He no longer allows his students to fight for money, however. And, most famous of all was Nong Tum, the “Beautiful Boxer.”

Whichever art came first, or who stole from whom, is a mute point. Modern Bokator is a codified martial art with a prescribed system of movements, tests, and belts, taught in a systematic fashion, leading to Black Krama.
Muay Thai Boran/Krabi Krabong are generally taught sporadically, a few moves here and there.

Bradal Serey, Muay Thai, Bokator, and Muay Thai Boran all include stand up grappling. In Thailand, the words “jap ko” are often used. This literally means, “grab the neck.” Only Bokator has ground fighting. Bokator encompasses all of the movements of Bradal Serey plus all of the movements of Khmer wrestling. In my Odyssey through southeast Asian martial arts, Cambodia seemed to be the only country which still practices traditional wrestling.

There is or was an ancient Lao form of martial art, called Ling Lam, but I was unable to find it while I was there. In Vietnam, the traditional art, Vo Vinam had some elements which were similar to Khmer arts, but seemed more closely to resemble a mix of Chinese and North East Asian Arts. There were rumors that traditional wrestling still existed, but I was unable to find it. So, I will be returning to both Vietnam and Lao. Vietnam did not have a traditional kickboxing art of any kind. In fact there is no professional fighting in Vietnam at all.

The Vietnamese Art of Cuong Nhu