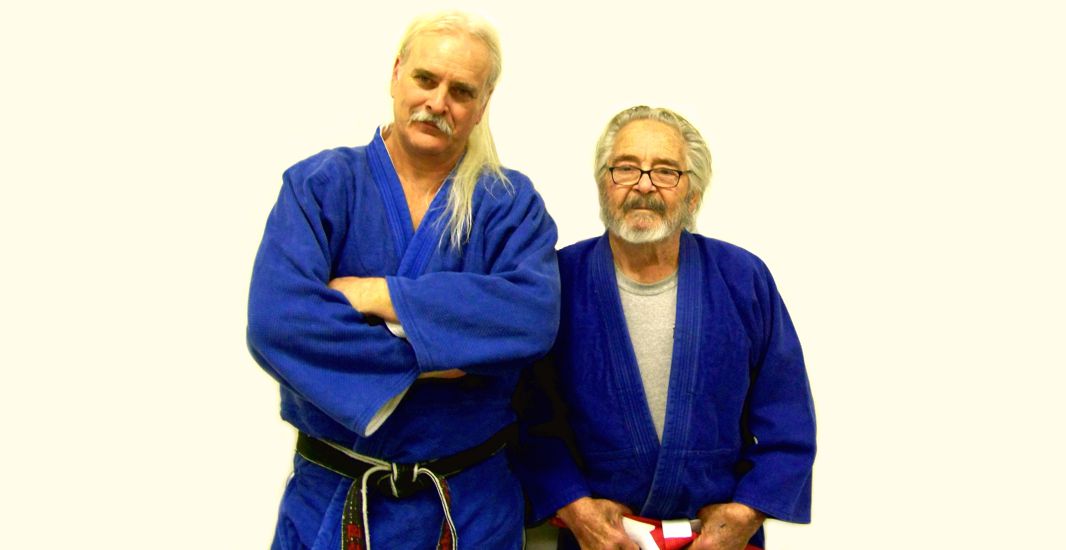 In the USJA manual, in one of the front pages, there was picture of Charlie Robinson. The captioned said, “One of the most beloved sensei.” Charlie Robinson was respected, admired, honored, and revered by most that he met… and yes, he was dearly loved.

Charlie Robinson grew up in a small community in Southern California that was 25% Japanese, thus affording him exposure to martial art. In 1940, at the age of 10, he began studying jujitsu techniques from a Japanese neighbor, Mr. Nakagawa. He studied with him for 1 ½ years. It wasn’t until he was stationed at Travis Air Force Base in the 1950s that he returned to the martial arts, studying judo and goshin jitsu with Sensei Walter Todd and Sensei George Harris as his teachers and mentors. He began competing shortly afterward.

A judo club was started at Beal AFB in the 1960s and Sensei Robinson instructed 23 competitors who placed in the top 3 places in military and national competition. Charlie was the National 175 lb. Champion in 1975 and the 78kg Masters champion in 1989. Charlie maintained a judo school from 1960 until a few years ago, and also taught at the Yuba Community College.

His dojo, Twin Cities Judo, in Yuba City, California, was a judo Mecca that many judoka traveled to in order to learn from Charlie. His techniques were simple and elegant, harkening back to Sensei Mifune’s effortless style of judo. He encouraged judoka to learn from him, but to make the techniques their own, telling them, “Do it exactly similar to what I just showed you.” He loved to share, and was a fixture at Camp Bushido at Colorado Springs, and also started his own camp, Camp Bushido West, where he spread the judo gospel for almost 30 years.

Charlie Robinson traveled thew United States sharing his special brand of judo, making the complex simple and the simple, complex. Asking why you took two steps when you could take one. He never traveled by plane; either driving, taking a train or bus, the countless thousands of miles over his lifetime to teach at far away location. He never asked for any money, usually coming out of his own pocket.

One of Charlie’s favorite stories was telling how he viewed his opponent in a judo tournament. He would say, “they made two mistakes. They showed up, and then drew me.” It was all in good humor as Charlie had the greatest respect for everyone.   If you stepped on the wrong side of the “what is right” line, he was not shy in voicing his opinion, but was the first in line to help remedy any difficult situation. Charlie always said, “It is not difficult to know what the right thing is to do.”

Sensei Charlie rose to a very rarefied air in the judo world, achieving the rank of hachidan, eighth degree black belt. This also takes into consideration that he remained a sandan, third degree black belt for 27 years, never asking for promotion. Serving on numerous boards and committees in his beloved United States Judo Association (USJA), his service to the judo world is unparalleled. Often eschewing personal notoriety he was the one who simply got the work done.

There are too many black belts to name throughout the United States that were promoted to black belt, and higher ranks by Charlie. One comment he made to a student who was questioning his own proficiency was, “Here are the keys to the belt. Learn to drive it,” meaning he was confident in the students ability to gain the confidence and move forward to learn more. Ever the mentor and life long supporter, the list of students who owe much of their judo knowledge and advancement to Charlie will go forward knowing they had one of the greatest teachers and guides anyone could ask for.

In his later years, Charlie Robinson still gave his best. Towards the end of his life, at one tournament in Sacramento with Gary Goltz, President of the USJA and one of Sensei Goltz’ students, a former marine and community firefighter, Charlie, sitting in his walker chair, taught the students a move. The student stepped out onto the mat for his first match, bowed, and then preformed the exact technique he had just learned on his opponent and throwing his in less than 30 seconds for an ippon. Walking back to his line the student looked to Charlie, and made a quiet simple bow to acknowledge Charlie. Charlie just smiled.

Charlie trained and studied with so many incredible judoka. Olympians such as Jim Bregman, the aforementioned George Harris, Ben Nighthorse Campbell, AnnMaria DeMars Rousey, Ronda Rousey. His Sensei in Japan was Sumiyuki Kotani, a student of the founder of judo, Jiguro Kano and his top student Kyuso Mifune, both 10th degree black belts of the world famous and headquarters of world judo, the Kodokan.

In the USJA manual, in one of the front pages, there was picture of Charlie Robinson. The captioned said, “One of the most beloved sensei.” Charlie Robinson was respected, admired, honored, and revered by most that he met… and yes, he was dearly loved.

The life and times of Charles Robinson can be used as a guide star, a moral compass, and a great example of the maxims of judo; maxim efficiency and mutual benefit and welfare.