What I do want to discuss is the difference in rank and promotion between a Christian martial arts organization and a secular one. The ranking systems and criteria for rank can be at odds between the two types of organizations.

Well, my brethren, here I go again, pontificating. You may not especially care for it but you knew when you began training with me that I am as much pastor as sensei. If you like the training it is one of the other benefits that you get. It’s a package deal so sit back and enjoy. If you don’t enjoy, endure. There may be a test after this and your next promotion may rest in the balance.

All joking aside (what you thought I was joking?) there is an issue I would like to address. I head a Christian martial arts organization and belong to several others. I sit on the master’s council of at least one of them. I also belong to several more secular organizations and sit on the master’s council of at least one of those. Being a part of these two types of organizations with their differing philosophies I am often called on to address a disagreement between them and even try to mediate an argument. We want peaceful and amicable resolution of these conflicts. We definitely don’t want them evolving into actual altercations. Though I doubt that something like that would happen it has happened before. The dojo wars in Chicago in the late sixties and early seventies are an example. I remember those too well.

Everybody doesn’t see things the same way. It’s the varying views that we share that make life interesting. Unfortunately it can make life a little bit more interesting than we want it to be. An old Indian (meaning from India) curse and blessing states, “May you live in interesting times”. According to how it is meant and how it unfolds it can be either. We want things to be interesting but only within reason.

I was recently put in a position to try to mediate a disagreement between two martial arts organizations. Both organizations and the primary individuals involved are dear to my heart. One organization is a Christian organization and the other a secular organization. I sit on the master’s council of both and have advanced rank in both systems of martial arts advocated by these organizations. I am also a chaplain and counselor for both. The reason behind the argument was a bit complicated but for the sake of this essay I’m going to oversimplify it. The disagreement was over rank and promotion being awarded to a particular person. I don’t want to argue the right or wrong of the two arguments or my own personal opinion in the matter. What I do want to discuss is the difference in rank and promotion between a Christian martial arts organization and a secular one. The ranking systems and criteria for rank can be at odds between the two types of organizations. Not saying that one is wrong and the other is right. The ranking system they use may suit the one and not the other.

First off let me say that several of the individuals on both sides of the argument were professing Christians. In spite of that the objectives of the two organizations were very different. The christian martial arts organization is organized as a ministry first and a martial arts organization second. It’s primary purpose was to use martial arts as a ministry. A christian martial arts ministry is like any other christian ministry. Its primary purpose is to win souls for Christ. The martial arts systems they teach are tools used to achieve those ends. That isn’t to say that those who teach in such a capacity aren’t serious martial artists. Many of us are. I’ve been involved in the martial arts for almost fifty five years. The study and teaching of the arts is one of my passions but first and foremost I am a minister and pastor. Fortunately I don’t have to choose between the two. I embrace both equally. In my mind they are different sides of the same coin. 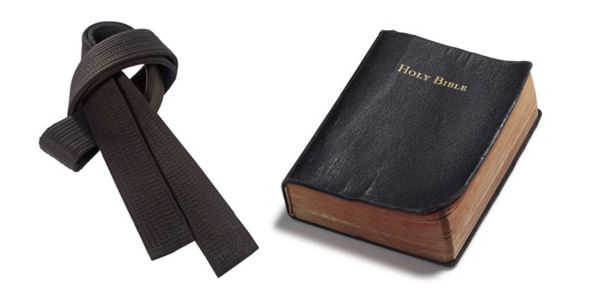 In my teaching career I have taught both classical and eclectic martial arts, I have taught in commercial and nonprofit dojo(s) and I have taught in christian and secular schools. In each instance my goal and my primary thrust was different. These days I am only interested in teaching christian martial arts in a spiritual setting. In a sense, my dojo is my cathedral. I have a steady income and I don’t have to teach for a living. I teach primarily out of a church gym or out of my home. Since I don’t care for large classes this works well for me. It also gives me an opportunity to impact the individual lives of my students independently. Considering my objectives that works best for me.

In the secular sector rank is based solely on skill and ability. Either a student is worthy of a particular rank, according to the requirements of the school, or he isn’t. There is no middle ground. In the ranking system of the organization that I head and the other two christian martial arts organization that I am a council member of the criteria for rank and promotion is different. In my organization my expectation for kyu rank and for the lower dan rank is the same as any other organization. It is based primarily on skill, knowledge and ability. The reason for this is that I need the teachers in the system to be adept enough to teach the students that they will be entrusted with. They have to have the skill, knowledge and teaching ability that is required of them. After sandan (3rd degree black belt) my criteria for rank parts with the norm. I am more concerned about their ability in ministry than their ability in the technical areas of the arts. That isn’t to say that I require no more skill for a godan 5TH degree) than a sandan. At that level I just base rank on ministerial skill as much as knowledge and ability in the arts. It is my belief that rank beyond godan is more administrative than skill based. One reason being that at the age that an individual reaches godan his physical abilities are waning. By the time a person reaches eight degree he’s been in the arts for about forty years. He’s probably in his mid fifties or early sixties by then. His knowledge may have grown but his body is no longer in step with his mind. At that rarefied rank a martial artist is judged more by what he knows and what he has accomplished and contributed to the arts than for raw ability. I can’t even begin to do the things I used to do ten years ago. I’m approaching sixty five years old and while I’m in remarkable shape for my age (my opinion) I’m still a senior citizen. There’s no need of fooling myself to the contrary. If I’m a master at all, and I don’t claim to be, it’s more because of what I know than what I can do. Too many people buy into the Saturday morning kung fu movie concept of shrivled up octogenarian kung fu masters beating up on young fighting champions. That’s a myth pure and simple. Angelo Dundee was a shriveled up boxing master but you didn’t see him beating up on Muhammad Ali.

Various schools, instructors and organizations have different criteria for rank and for promotion. A shodan in one school would hardly qualify as a brown belt in another. Each school and organization has its own requirements for rank. Since there is no one board that regulates this it is just how it is. My organization is no different. I want my instructor rank people to be comparable with any other organization’s but when it comes to master rank I judge differently. I am looking for the one who can inspire. One who can give good council. One who can impact the spiritual lives he teaches and those who serve under him. First and foremost they are ministers. After that they are martial artists. At higher rank I place the former over the latter. I am more interested in creating good Christians than creating good fighters. Our system doesn’t particularly encourage sports karate. Ours is a combative system. That isn’t because I’m trying to turn out street fighters or bar room brawlers. It’s because I teach the way I was taught. I was taught what was effective in a self defense or combative application. It’s what I know. What I understand. A few of my students have fought in tournaments and some have done very well but it isn’t our point of interest. Ours can be a brutal system. Because of the potential of abuse of the system I am especially adament that I teach good christian ethics to go along witht the martial skills I am trying to instill into my students. We are accountable for what we teach. Especially to the young. A good moral foundation must be laid with the physical skills that they are learning.

I am not alone in my philosophy in teaching and ranking. The other two christian organizations that I represent hold to something of the same philosophy. We are trying to create good christian, good citizens and good human beings. The ability to do so, using the martial arts as a means to that end is the quality we look for in our instructors and especially in our master level people. In our hearts and minds that trumps raw martial arts ability and teaching skills every time.

There, see there. This wasn’t a sermon after all. You’ll notice that unlike most of my articles and essays not a single scripture was quoted. Don’t let that fool you however. This was as much a spiritual message as all of those others. I will give this advice to my fellow christian martial arts instructors. Whatever you do do as unto the Lord. And remember, my brothers, only what you do for Christ will last. God bless you, my brethren. Train hard and go with God.

Kung Fu of the Mind: The Mental Aspects of the Martial...

The Difference Between a ‘Do’ and a ‘Jitsu’