The general rule for handgun disarms, when it comes to trying to disarm an attacker of a pistol in hand-to-hand combat, is “If you can touch the gun, you can take the gun”. In my Reality-Based Personal Protection Crime Survival course I teach people how to do gun disarms police and military style. Yet, before I demonstrate to my students how to correctly disarm an attacker armed with a pistol I let my students show me how they think it should be done first in a realistic simulation (also known as scenario training). Since my self-defense seminars attract martial artists from every kind of fighting system imaginable I get a chance to “see it all.” Needless to say, I see a lot of techniques, and within seconds I can tell if a student knows anything about firearms or not based on having been a police and military certified firearms instructor and Range Safety Officer (RSO) since 1992.

One of the biggest mistakes I see martial artists doing when it comes to gun disarms is using one hand to control the opponent’s weapon, while using the free hand to strike simultaneously; be it a punch or an elbow. One reason why martial artists tend to believe that such techniques could really work in a life and death situation is because they are using rubber training guns, thus there is no consequence of actually getting shot; not to mention that the opponent is a cooperative training partner. In reality, a criminal’s survival instincts are going to kick in if you ever try to take his gun away from him, and there’s not a whole lot you can do to prevent him from pulling it away from you if you’ve only got one hand on the weapon or a grip on his weapon hand. Big deal! You punch or kick him. Or worse yet, you try to do some fancy arm lock. A person with a handgun is using deadly force on the use-of-force continuum (someone using a firearm against you is considered deadly force) and you are using what the law calls reasonable force (impact force, which are your punches & kicks). Keep in mind that most criminals can take a full-contact strike or two, but it only takes him a split second to pull the trigger and a bullet rips through your body. In a real conflict involving a firearm you have only fractions of a second to make the right decisions. You can’t afford to risk your life with untested gun disarm techniques. 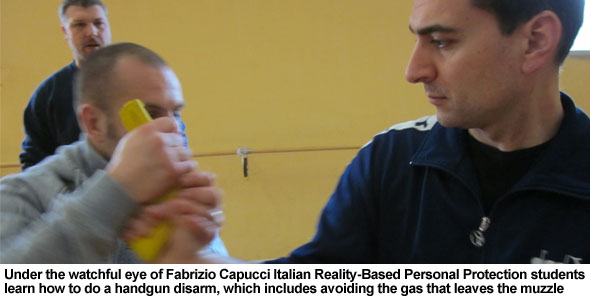 The next big mistake I see most martial artists do while attempting a gun disarm is to hold the attacker’s gun too close to their own body. Oh sure, the muzzle may be pointed in a safe direction (meaning that the bullet will not strike when leaving the muzzle), but they forget about the burning gasses that come out of the muzzle as well. Do the gasses leave the barrel in a straight line like the bullet? The answer is no.

The gasses that rapidly leave the muzzle and expand, at approximately 900 feet per second (274 meters per second), come out at approximately 60 degrees from the end of the barrel, and expand out with lethal force to fire ball about several inches (22 centimeters). So, you may indeed have the suspect’s muzzle pointed away from you in a safe direction, but if the end of that muzzle is anywhere near your chest, abdomen, bicep, or any other part of your body because you are wrongfully holding on to it, you’re going to get a big chunk of your body blown away. How affective will your gun disarm be then when this happens?

All it takes to prove my point is for you to go to a shooting range and put the muzzle right up against the cardboard backing of a target (or a watermelon) and pull the trigger. Don’t be surprised if most of the top half of the cardboard target backing rips away, because the force coming out of that muzzle is tremendous. Watch it at night and you’ll see for yourself just how far the gasses will spread out from the end of the barrel into that fireball I mentioned. 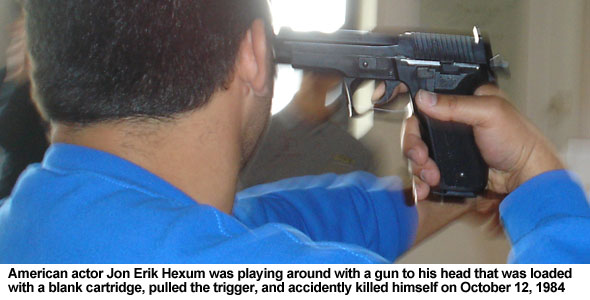 If you perform a real gun disarm on someone and you neglect the gas component of the cartridge, and a part of your body gets violently ripped away, you’re going to panic and lose your focus, and thus fail to complete the disarm. Can you handle it psychologically seeing some of your flesh ripped from you? Now that I’ve warned you, you can adjust your gun disarm techniques accordingly to allow for more space around the muzzle so that the expanding gasses will not be a factor.

I personally teach my students the following technique sequence when it comes to Reality-Based Personal Protection gun disarms at touching distance (the red zone based on the treat distances):

When I teach my students gun disarms I keep it simple. I also use air guns that “fire” 6mm plastic pellets at low velocity (230 ft. per second or 1 joule). For those students that are too slow or get too complicated, they get shot. Plus, if they are not quick enough in getting the suspect’s gun away from him I let the “bad guys” (the trainers) protect themselves and their weapons, just like in real life.

One more thing you must consider when doing gun disarms is the deafening noise that will come from the muzzle of the gun once it is discharged. A loud noise like that at extreme close proximity to the ears is going to shock you if you are not prepared for it, and you may even inadvertently let go of the weapon momentarily as a startle response.

To help my students overcome this loud noise shock I will often times have a starter pistol or a real pistol loaded with a blank cartridge and fire a round above to students fighting over one rubber gun on the ground. The first students to experience this just about jump out of their skins when this happens, but the next time they do the exercise they are desensitized to the noise and they continue to fight without skipping a beat. If you are unable to use a starter pistol or a gun loaded with a blank cartridge in your training you can always pop a balloon with a needle or pop a blown up paper bag with your hand over their heads to simulate the report of a gun going off. 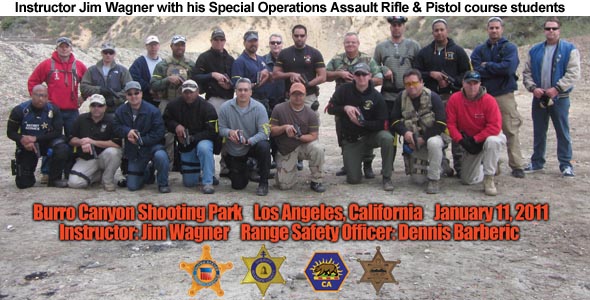 Continuing the gas avoidance concept further, let’s say that you and the attacker are struggle over a single pistol, and that pistol is a semi-automatic weapon; meaning that it has a slide on top half portion of the weapon and a receiver as the low half of the weapon.

As both you and the attacker have your hands on the weapon, trying to take control of the weapon, a round is suddenly discharged. This can happen accidently or someone attempted a shot. If you feel you will not be able to take possession of the weapon let go of it immediately just after the round goes off and go for an immediate deadly force counterattack, such as striking the eyes or throat. For that moment that gun is nothing more than a chunk of metal.

A semi-automatic pistol is a magazine fed blowback weapon system. The slide needs to be free and clear in order to cycle and shove another cartridge into the chamber. If somebody’s hand is gripping the slide there is not enough power in the cycling phase to overcome the pressure, and thus the chamber remains empty. If you are fast enough you can do a counterattack before he pulls the slide back and chambers another round. Obviously, lots of practice in such a scenario will make your reaction time quicker. On the other hand, if both you and the attacker are fighting over a revolver (this is a handgun where the bullets are contained within a metal cylinder), then letting go of the weapon in order to launch a counterattack is not a good idea. A cylinder, especially with sweaty or bloody hands, is very difficult to stop its rotation and having the next bullet in place for firing. 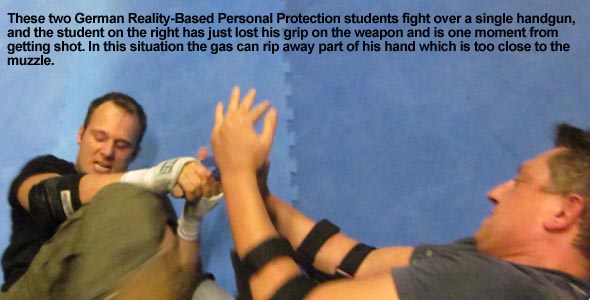 Again, why don’t traditional and sport-based martial arts, and a lot of so-called “reality-based” systems, on the whole teach their students about the dangers of smokeless powder gas, loud noise shock, and other technical aspects of a handgun? The answer again lies in the fact that most civilian martial arts instructors are not firearms experts. As far as I know, and I have much documentation to prove it from various DVDs and publications worldwide, I was the first self-defense instructor to introduce this type of training to the civilian martial arts community. In fact, as a military combatives instructor and a police defensive tactics instructor since 1992 I have never seen any organization teach these specific dangers before. Oh sure, the professional community teaches gun disarms, as does the martial arts community, but not to the extent I have. I don’t say this to pat myself on the back, but to illustrate that this is just one more reason why my Reality-Based Personal Protection system has revolutionized not only the civilian martial arts world, but professional training as well; for over the past two decades I have trained thousands of soldiers, marines, airmen, sailors, law enforcement and corrections officers from many countries and my teachings are within these communities as well. The bottom line is that everyone serious about learning self-defense must incorporate these training methods into their own training. After all, it’s based on real life.

Now that you know about smokeless powder gasses that leave a firearm’s muzzle, and take the noise of the report more seriously, you’re handgun disarm training will be more reality-based.

Jim Wagner - December 15, 2010
We use cookies to ensure that we give you the best experience on our website. If you continue to use this site we will assume that you are happy with it.OkRead more