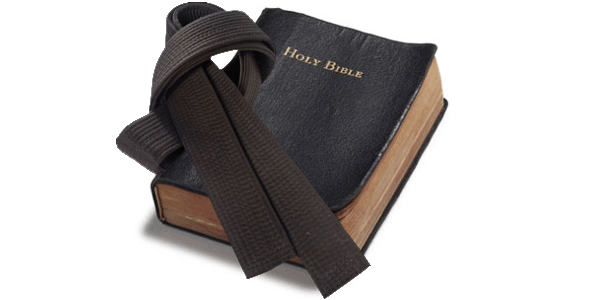 There are pastors who study martial arts, but not many who have studied for decades. So, I am among a rare few. (I am happy to say that I belong to that same small group of long-time martial arts practitioners/clergy as Black Belt Hall of Fame member Leo Fong. Rev. Fong is a retired clergy member of the same denomination of which I am a not-yet-retired clergy member.) This is why I am often approached with questions about Christianity and martial arts – usually, the phrase “how do you reconcile…” is used.

Generally, the questioners fall into one of two groups. One group of questioners , having been challenged in their practice by folks with a liberal or Quaker bias, wonders about reconciling martial arts practice with teachings of non-violence. The answer is simple, You can’t. If Jesus taught pacifism – the absolute requirement that one never act violently toward another human being – then it is impossible to be a martial artist and be a Christian. Even the mere practice of martial arts (without any intention to actually use the skills learned) would be the cultivation of a violent heart.

But, I am a martial artist of 40 years. Clearly, I am no pacifist. I do not think that Jesus taught pacifism (as an absolute approach to life). And I do believe that sometimes an act of violence is a loving act. For example, if I were to come upon a woman being raped, I would intervene with violence because I would be acting in a loving way toward her. And I would also be acting in a loving way toward the rapist (the person upon whom I would be inflicting the violence) in as much as I am stopping him from committing a heinous sin. Likewise, if someone attacks me, and I defend myself, I am acting lovingly toward myself, and, by thwarting my attacker, I am acting lovingly toward him.

Having said that, I make three cautions. First, to accept a slap and not retaliate is the only sure way to topple an empire. Second, violence is overrated. It usually is the lazy-politicians solution to a problem, and the bully’s sure proof of inner weakness. Every true martial artist knows that restraint is far more effective than blows. Third, the only valid use of violence is to stop the violent actions of the violent.

The second group of questioners, having been challenged in their practice by folks with a conservative or fundamentalist bias, wonders about martial arts practice being incompatible with Christian teaching because the martial arts are somehow demonic. To this I would make the simple observation that the measure of true evil is the harm it causes. By this measure there truly is a demonic martial art. It is an art that allows one to kill many people with virtually no effort, no discipline, no training, no practice. It allows great harm to be inflicted on others without ever having to learn control, restraint, or the simple truth of what it feels like to be on the receiving end.

Karate, aikido, tai chi chuan, taekwondo, and the rest do not even come close to fitting this definition. How can we tell? Simple: have you EVER heard of an outcast high schooler killing a dozen classmates with his karate skills? Have you ever heard of a broken-hearted lover killing coeds from atop a clock-tower using his ninja shuriken? Have you ever heard of a disgruntled employee “going postal” with his nunchaku?

You never have, and you never will. But, that disgruntled employee can walk into a gun-shop today, and be killing co-workers tomorrow. Now, I am not anti-gun. But, considering what we know to be true in this country (something like 15,000 gun-deaths per year, and how many “karate killings”? – 0?) it is just nonsense for anyone to hassle a hard working martial artist with accusations that somehow studying a martial art is in anyway akin to worshiping the devil.

The Tao in Jujitsu

Complete Taekwondo Poomsae and Other Books By Sang H. Kim