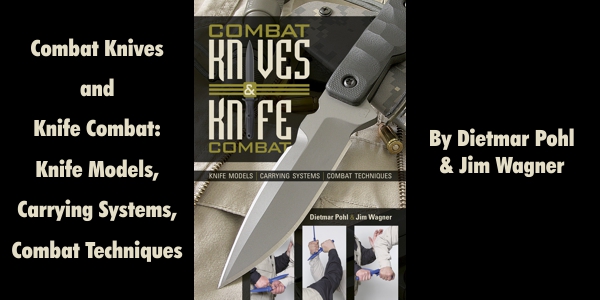 On July 28, 2015 Jim Wagner’s new book, Combat Knives and Knife Combat, co-written by Dietmar Pohl, who wrote on the technical aspects of knives, was released on Amazon.

This 200 pages hardcover book, published by Schiffer Publishing, is packed with high quality photos. All variety of modern knife systems are shown and explained in depth by Dietmar Pohl and Jim Wagner’s portion of the book shows and explains Jim’s Reality-Based Personal Protection Knife Survival techniques and training methods. These are the same techniques requested by German counterterrorist team GSG9 and the Israeli government, with step-by-step color photographs demonstrating each technique. For anyone in Jim’s Reality-Based Personal Protection system or who teaches or wants to learn knife defense, this book is a must for your martial arts library. 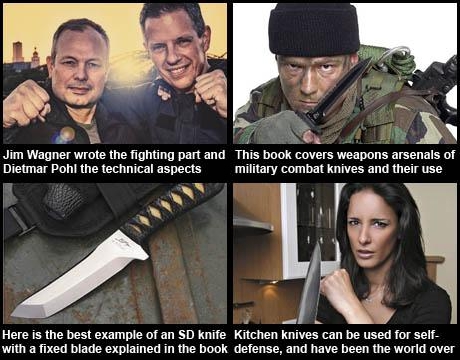 About the Book
Combat Knives and Knife Combat is a comprehensive book that covers all aspects of self-defense knives. This includes knife history, development, and technology, as well as practice, training, and combat techniques. Learn about the historical development of modern self-defense knives and their various technical systems, designs, and materials. The book covers various possibilities for carrying an SD knife, answers questions such as whether a folder or fixed blade is the right choice, and gives recommendations on training knives. The most important combat knives and knife combats of Hollywood movies are included. Readers of Combat Knives and Knife Combat will learn the basics of Wagner’s reality-based training system. There are contributions from well-known knife and combat experts such as Sal Glesser, Michael Janich, Frank Metzner, Joachim Friedrich, Dieter Knüttel, and Sohny which cover special topics such as butterfly and karambit knives, escrima, and self-defense against dogs.

About Dietmar Pohl
Dietmar Pohl has a long term reputation as an outstanding knife designer and is also an internationally named author. Dietmar established Pohl Force, a company which specializes in combat, tactical and survival outdoor knives. Pohl Force Tactical knives have an excellent reputation within Military and Police Special Forces worldwide and are designed to provide ultimate performance and reliability in the harshest environments. The design attributes and materials used ensure comfort, functionality and unsurpassed durability.

About Jim Wagner
Jim Wagner has a background that few warriors or law enforcement officials can match: taught the martial arts at an early age from some of the world’s most renown instructors, a soldier, corrections officer, police officer, S.W.A.T. officer, diplomatic bodyguard, and a counterterrorist for the United States government. Black Belt magazine named him Self-Defense Instructor of the Year in 2006, Budo magazine of Europe inducted him into their martial arts Hall of Fame the same year, followed by the Masters Hall of Fame in 2011, and then the Martial Arts History Museum in 2013. Why? Because he modernized the way people learn self-defense today by being the “father of the reality-based self-defense movement.” As one of the top Defensive Tactics and Combatives instructor in the world Jim Wagner has trained German counterterrorist team GSG9, the Israeli National Police Academy and Israel Defense Force Bahad 8, Argentinean G.O.E, Brazilian G.A.T.E., Finnish National Police Academy, NATO Special Forces Base Pfullendorf, FBI S.W.A.T., U.S. Marshals Special Operations Group, U.S. Coast Guard Boarding Teams, U.S. Border Patrol, U.S. Air Force Security Forces, U.S. Army Special Reaction Teams, Mexican Special Operations teams, and the list goes on.

Spirit of the Tiger: The Building of a Martial Arts Grandmaster’s...