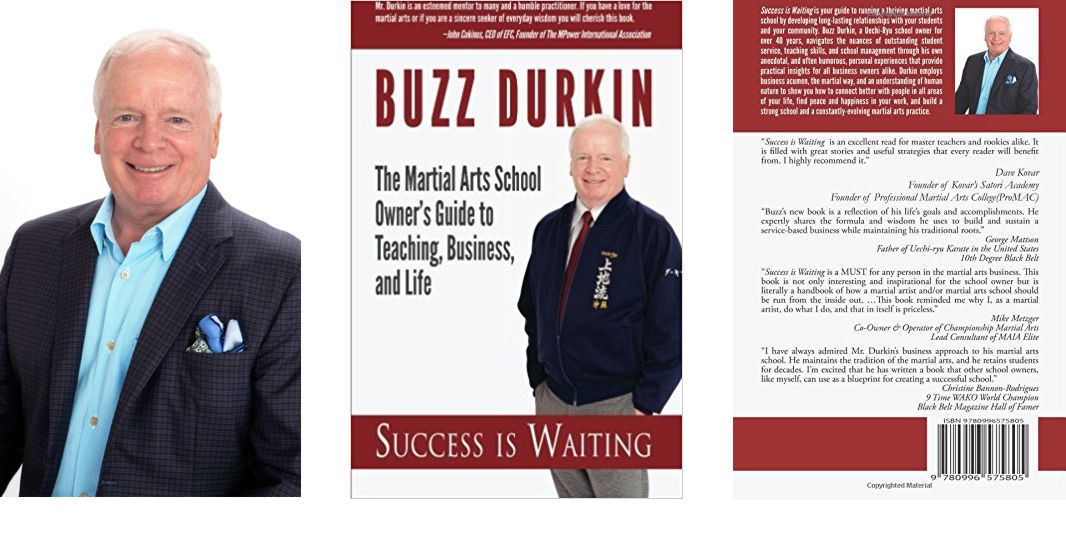 Success is Waiting is your guide to running a thriving martial arts school by developing long-lasting relationships with your students and your community. Buzz Durkin, a Uechi-Ryu school owner for over 40 years, navigates the nuances of outstanding student service, teaching skills, and school management through his own anecdotal, and often humorous, personal experiences that provide practical insights for all business owners alike. In Success is Waiting Durkin employs business acumen, the martial way, and an understanding of human nature to show you how to connect better with people in all areas of your life, find peace and happiness in your work, and build a strong school and a constantly-evolving martial arts practice.

About the Author
Buzz Durkin is the author of Success is Waiting. He is a ninth degree black belt in Okinawan Uechi-ryu Karate. For more than four decades he has been the headmaster of Buzz Durkin’s Karate School, which is one of the most successful traditional martial arts schools in North America. His school has won school of the year and martial art facility of the year multiple times. Durkin is a charter member of the Uechi-ryu Hall of Fame and a member of the World Martial Arts Hall of Fame. Durkin is on the board of directors of the Educational Funding Company and the governing board of the World Martial Arts Federation. He has appeared on the cover of several international magazines including Martial Arts Professional and Uechi Newsline. Durkin is internationally recognized as an expert in student service and as such has been the keynote speaker at numerous International Martial Arts conventions. He has been a guest speaker for the United States Martial Arts Association, The Educational Funding Company, The World Martial Arts Federation and the International Uechi Karate Federation to name a few. His ability to relate to people and his understanding of human nature are known and recognized worldwide making him a much sought after speaker and consultant not only in the martial arts field but in the academic and corporate fields as well. He is known in the martial arts field as the “Retention King” for his ability to ensure student longevity of study. Durkin is a Vietnam combat veteran who received both his Bachelor of Science degree and his MBA from Boston College. He lives in Atkinson, New Hampshire with his wife of forty years, Judy.

What Martial Arts Training Does For People

Robyn Silverman - February 1, 2014
We use cookies to ensure that we give you the best experience on our website. If you continue to use this site we will assume that you are happy with it.OkRead more