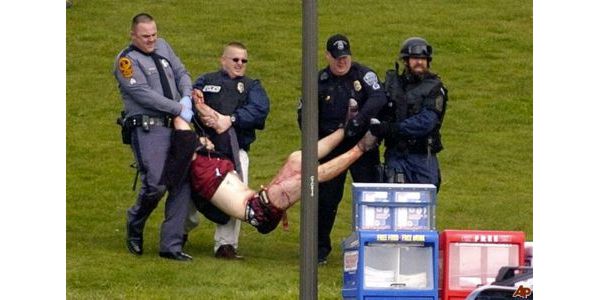 The Tennessee state legislature is considering legislation that would decriminalize the carrying of concealed weapons on state university campuses by individuals who have Handgun Carry Permits. The UTK faculty senate, administration, campus police, and student government association have gone on record as opposing this legislative change.

Since emotional arguments may have more weight for opponents of permitting responsible adults to legally carry weapons on college campuses, let me relate that I was on the faculty at Virginia Tech for 25 years and I still have many friends and colleagues there. However, one less colleague is alive today because a deranged student shot him and 32 others dead. I don’t know how many of these people might be alive today if just one of the several hundred people locked in Norris Hall had a weapon, but I do know that all of these people had a right to life and a right to defend it. This right, however, was usurped by laws designed to disarm law abiding students and faculty. The proposed legislation would formally reinstate that inalienable right of self defense to imagined ivory towers of Tennessee higher education.

The deranged student at Virginia Tech brought weapons onto campus with the express intent to commit murder. Having made this decision, I am sure he was not overly concerned about breaking the law by illegally carrying weapons on campus. For the record, the student did not hold a handgun carry permit. It seems to me that a great many involved in higher education, who notionally profess to hold reason and scientific method as high ideals, abandon logic and reason in favor of emotion when the subject of guns arises.

For those who claim to have an open mind, I ask that you consider the following:

Current Tennessee law requires a minimum age of 21, a comprehensive FBI criminal background check, fingerprints, classroom instruction and live-fire certification to receive a Handgun Carry Permit. Consequently, legally-armed citizens already have training and experience with firearms, and have demonstrated responsibility. Holders of concealed carry permits in the U.S. are arrested for violent crimes at a rate five times lower than non-license holders (even lower than police officers in many states).

Whether or not you support concealed carry, it’s already an existing right in Tennessee and most other states. Under current law, armed citizens can carry a concealed weapon into literally thousands of places throughout their state, including movie theaters, restaurants, banks, shopping malls, churches and grocery stores, and have done so responsibly for years. In view of this, prohibiting these same responsible individuals from carrying a concealed weapon on a college campus doesn’t make sense.

History is clear. Stickers on campus doors saying “no guns allowed” don’t stop criminal offenders. In fact, no law will ever affect criminal behavior because criminals, by their very nature, do not follow the law. What these signs actually do is create (and advertise!) a defense-free zone, removing legal guns and forcibly disarming victims. This is exactly what makes colleges most attractive to killers who seek easy targets.

Killers don’t take time to register their firearms or obtain permits for their murder weapons. Virginia Tech and a host of other college shootings demonstrate that. Responsible individuals carrying legal weapons on campus are the very ones that could make a difference in a hostile situation. The Net Effect is Positive Many students state they would not feel safe if concealed carry were allowed. However, concealed carry at Virginia Tech was blocked with the specific goal of “feeling safe.” On April 16, 2007, it became clear that feeling safe isn’t the same as being safe.

Opponents of concealed carry on campuses frequently point out that colleges are safer than cities and urban environments. However, crime rates on college campuses have risen in recent years, and statistics show that, nationwide, there are nine sexual assaults reported on college campuses each day. Furthermore, the low probability of becoming a victim doesn’t help the 47 victims at Virginia Tech, or the 27 victims at Northern Illinois University, or any of the other countless victims of crimes on campuses. Current policies give such victims the option of playing dead or huddling under desks.

Campus officials have introduced multiple responses to the problem of campus crime all of which are reactionary. Campus police, text message alerts and cameras are all good ideas that demonstrate an awareness of the problem. But awareness is not the same as readiness; text messages are ineffective, police are often thinly-spread across vast campus grounds and cameras will do nothing more than capture footage for the nightly news. The fact remains that colleges are open environments with invisible boundaries and little to no secure prevention measures. They cannot guarantee protection to students or prevention of armed assaults. In all honesty, it’s not fair to expect them to. It’s completely impractical to expect colleges to provide airport-grade security with a secure perimeter, metal detectors, armed guards, bag inspections and pat-downs. Even if they could, few people want the nature of a college campus changed so radically.

Therefore, any institution that cannot provide for protection for its visitors must not deprive those visitors of the ability to protect themselves.

Common Arguments Made by Opponents of Concealed Carry on Campuses

Argument: Guns on campus would lead to an escalation in violent crime.

Since the fall semester of 2006, state law has allowed licensed individuals to carry concealed handguns on the campuses of the nine degree-offering public colleges (20 campuses) and one public technical college (10 campuses) in Utah. Concealed carry has been allowed at Colorado State University (Fort Collins, CO) since 2003 and at Blue Ridge Community College (Weyers Cave, VA) since 1995. After allowing concealed carry on campus for a combined total of one hundred semesters, none of these twelve schools has seen a single resulting incident of gun violence (including threats and suicides), a single gun accident, or a single gun theft. Likewise, none of the forty “right-to-carry” states has seen a resulting increase in gun violence since legalizing concealed carry, despite the fact that licensed citizens in those states regularly carry concealed handguns in places like office buildings, movie theaters, grocery stores, shopping malls, restaurants, churches, banks, etc. Numerous studies1,2,3, including studies by University of Maryland senior research scientist John Lott, University of Georgia professor David Mustard, engineering statistician William Sturdevant, and various state agencies, show that concealed handgun license holders are five times less likely than non-license holders to commit violent crimes.

Argument: Guns on campus would distract from the learning environment.

Ask anyone in a “right to carry” state when he or she last noticed another person carrying a concealed handgun. The word “concealed” is there for a reason. Concealed handguns would no more distract college students from learning than they currently distract moviegoers from enjoying movies or office workers from doing their jobs.

Before shall-issue concealed carry laws were passed throughout the United States, opponents claimed that such laws would turn disputes over parking spaces and traffic accidents into shootouts. This did not prove to be the case. The same responsible adults age twenty-one and above now asking to be allowed to carry their concealed handguns on college campuses are already allowed to do so virtually everywhere else. They clearly do not let their emotions get the better of them in other environments; therefore, no less should be expected of them on college campuses.

Argument: In an active shooter scenario like the one that occurred at Virginia Tech, a student or faculty member with a gun would only make things worse.

What is worse than allowing an execution-style massacre to continue uncontested? How could any action with the potential to stop or slow a deranged killer intent on slaughtering victim after victim be considered “worse” than allowing that killer to continue undeterred? Contrary to what the movies might have us believe, most real-world shootouts last less than ten seconds4. Even the real Gunfight at the O.K. Corral, a shootout involving nine armed participants and a number of bystanders, lasted only about thirty seconds and resulted in only three fatalities. It is unlikely that an exchange of gunfire between an armed assailant and an armed citizen would last more than a couple of seconds before one or both parties were disabled. How could a couple of seconds of exchanged gunfire possibly be worse than a ten-minute, execution-style massacre?

Argument: The job of defending campuses against violent attacks should be left to the professionals.

Nobody is suggesting that concealed handgun license holders be charged with the duty of protecting campuses. What is being suggested is that adults with concealed handgun licenses be allowed to protect themselves on college campuses, the same way they’re currently allowed to protect themselves in most other unsecured locations. According to a U.S. Secret Service study 5 into thirty-seven school shootings, Over half of the attacks were resolved/ended before law enforcement responded to the scene. In these cases the attacker was stopped by faculty or fellow students, decided to stop shooting on his own, or killed himself.” The study found that only three of the thirty-seven school shootings researched involved shots being fired by law enforcement officers.

Argument: How are first responders supposed to tell the difference between armed civilians and armed assailants?

This hasn’t been an issue with concealed handgun license holders in other walks of life for several reasons. First and foremost, real-world shootouts are typically localized and over very quickly. It’s not realistic to expect police to encounter an ongoing shootout between assailants and armed civilians. Second, police are trained to expect both armed bad guys AND armed good guys from off-duty/undercover police officers to armed civilians in tactical scenarios. Third, concealed handgun license holders are trained to use their firearms for self-defense. They are not trained to run through buildings looking for bad guys. Therefore, the biggest distinction between the armed assailants and the armed civilians is that the armed civilians would be hiding with the crowd, and the armed assailants would be shooting at the crowd.

4. In “The Line of Fire: Violence Against Law Enforcement,” U.S. Department of Justice, Federal Bureau of Investigation, National Institute of Justice, 1997

The foregoing issues and arguments were extracted with minor editing from www.concealedcampus.org where additional relevant information and references to research studies may be found.