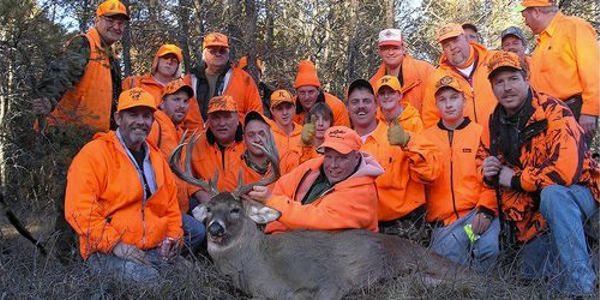 For the sake of our freedom, don’t ever allow gun control or the confiscation of America’s guns.

In World War Two, the Japanese Emperor Hirohito was musing about the possibility of invading the United States in the aftermath of Pearl Harbor. Admiral Isoroku Yamamato, the greatest Japanese military leader of the time, and a man who had gone to college in the USA, told the Emperor, “You can never invade the United States successfully. There would be a rifle aimed at our soldiers from behind every blade of grass in the country.” The legendary Yamamato knew, that an armed populace will always fight to remain free.

A blogger added up the deer license sales in just a handful of states and arrived at a striking conclusion:

There were over 600,000 hunters this season in the state of Wisconsin.

Over the last several months, Wisconsin’s hunters became the eighth largest army in the world, with more men under arms than in Iran and more than France and Germany combined.

These men deployed to the woods of a single American state, Wisconsin, to hunt with firearms, and no one was killed.

That number pales in comparison to the 750,000 who hunted the woods of Pennsylvania and Michigan’s 700,000 hunters, all of whom have now returned home safely. Toss in a quarter million hunters in West Virginia and it literally establishes the fact that the hunters of those four states alone would comprise the largest army in the world. And then add in the total number of hunters in the other 46 states. It’s millions more.

America will forever be safe from foreign invasion with that kind of home-grown firepower.

Hunting… it’s not just a way to fill the freezer, it’s a matter of national security.

That’s why all enemies, foreign and domestic, want to see us disarmed.

This is Food for Thought, when next we consider gun control.

If we disregard some assumptions that hunters don’t possess the same skills as soldiers, the question would still remain… What army of 2 million would want to face 30, 40, 50 million armed citizens???

For the sake of our freedom, don’t ever allow gun control or the confiscation of America’s guns.