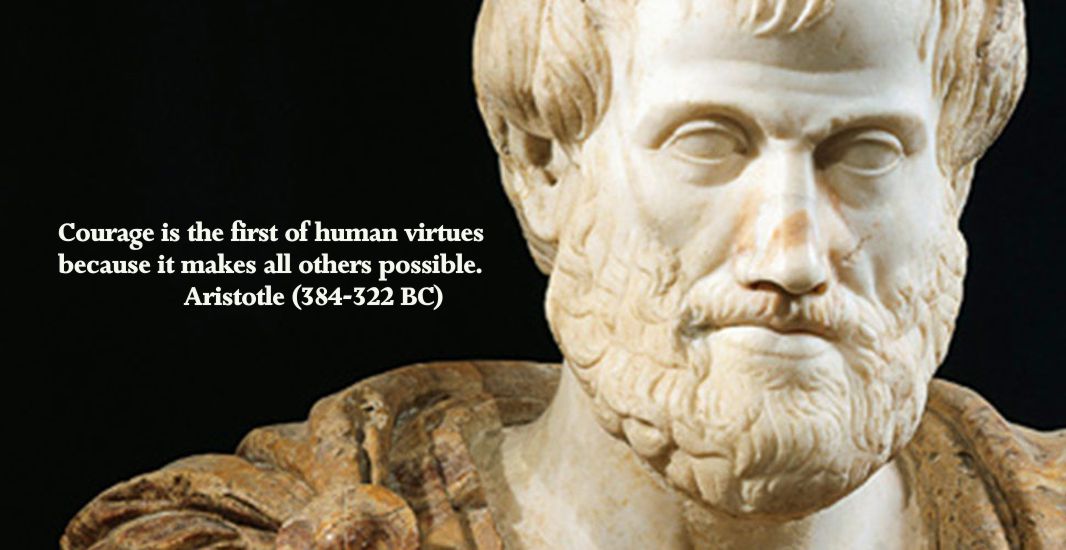 “Courage is the first of human virtues because it makes all others possible.” ~ Aristotle (384-322 BC)

A courageous act can sometimes save a life. A firefighter say, rescuing a victim from a blazing building, while on the other hand, a courageous act could be one of pure recklessness that benefits no one. For example, a mountain climber, who happens to be a compulsive risk-taker, scales dangerous peaks or a tightrope walker, who fearlessly crosses a rope attached to high buildings.

In daily life, acts of bravery are typically displayed when facing physical dangers. Certain occupations expose workers to a variety of hazards. For instance, hospital staff members at times treat patients suffering from highly infective and virulent diseases. The test pilot flying prototype aircraft faces much uncertainty. Will he be able to take off, accurately control in mid-air, and land the craft safely? Fortitude is often personified by the soldier under heavy fire in a war zone or the lifeboat rescue crewman braving stormy seas, so too the bomb disposal squad member and the construction worker actively engaged on tall structures. All such duties are at times acts of daring in the physical sense.

Because courage is a virtue with several definitions, let’s look at some of the less obvious forms. What about perseverance? This is frequently shown by a determination to stick to one’s guns. The man who has to maintain a long-term strict diet in tackling obesity, say, or the alcoholic who resolutely resists the temptation to re-start consuming alcohol. The truly strong-willed individual is not content to merely hold his ground; he is continually striving forward, even in times of great difficulty and perhaps has to contend with derision from others. To fail repeatedly, but to spend oneself in a worthy cause until achieving success can be a praise-worthy trait in one’s character.

Moral backbone is sometimes manifested by one’s resolve in facing ethical issues. This is reflected in the man who faithfully holds onto his convictions when his values are severely put to the test. He defends a moral principle while others may prefer to choose the safer aloof detachment from the issue at hand. Such a resolute attitude displays the preservation of one’s integrity and can serve as a role model for others to emulate.

Next, the man in a position of leadership has at times to show intellectual bravery by adopting a willingness to consider new ideas and deal with any attendant difficulties. By placing honesty as the basis of the decisions he makes, often requires a commitment to do what is right rather than what is expedient or most convenient. He needs the nerve to be curious, to check facts, and ask questions since he risks making errors of judgment. This strategy can be a form of daring. The man with intellectual tenacity takes whatever time is necessary in order to gain a thorough understanding of the issues. He is dissatisfied with a superficial overview. He listens intently and takes into consideration the opinions of others by seeking out opposing views relevant to the problems. Such a man is not afraid to question others repeatedly until he has gained a clear understanding of the situation and the probable consequences of his actions. This is the toughness often needed in order to carry out leadership duties in a responsible and constructive manner.

Another element of this multi-faceted virtue is spiritual resolve. We live in a fragmented world, divided by sectarianism, intolerance, hatred and greed. Boldness is necessary in speaking one’s mind to a hostile audience on contentious issues, especially so when the legs are quivering. Again, there may be times of urgency when we are thrust into a role that we have no wish to fulfill or for which we are totally unqualified for, and become as it were ‘a square peg in a round hole’. To do one’s best in taking on such a stressful challenge and to complete one’s relevant duties satisfactorily, can again be a courageous act. And moreover, an obvious example is the man of supreme will who is unafraid of the prospect of his own demise. Such firmness was demonstrated by judo expert Gunji Koizumi (1885-1965), who indicated in his diary several months prior to his end that he planned to take his own life.

Moving on to judo, the sport has undergone revolutionary changes since the early 1960s when weight categories were first introduced in many competitions. Before that time, championships were open-weight events with far fewer restrictive rules than today. Therefore one customarily met a wide range of opponents, from lightweights to heavyweights. Contestants had more freedom to grip all parts of the opponent’s arms, legs, jacket and trousers and, a greater range of techniques were allowed. Occasionally, the smaller highly-skilled judoka would courageously tackle and at times throw their heavier opponents. Such feats were regularly greeted with loud applause from spectators. Multiple rule changes have over time placed increasing restrictions on such former freedoms. I would also add that in some competitions, the open-weight All Japan Judo Championship, for instance, contestants do not use blue judogi, all are in white.

Fortitude in judo provides us with much to consider. Indeed, in the case of injury during a bout, do we withdraw from the competition or tough it out even though we are in pain and greatly handicapped? A case in point occurred at the 1984 Los Angeles Olympic Games +100 kilos category final bout when Yasuhiro Yamashita, who had suffered a leg injury prior to the final, limped onto the mat to face the biggest man in the tournament, the 190 cm. tall, 140 kilogram, Egyptian heavyweight, Mohamed Ali Rashwan. Nevertheless, the Japanese public deemed it Yamashita’s duty to ignore his injury and capture the gold medal for Japan no matter what. Fortunately, he managed to secure a hold down during a ground work tussle and surprisingly did indeed win Olympic gold. This particular incident gained Yamashita nationwide publicity and made him a most suitable icon for the rising generation of Japan. Again, I recall former leading British judo contestant, Karen Briggs, -48 kilogram world champion in 1982, 1984, 1986 and 1989 who continued fighting until the finish in a bout at the 1992 Barcelona Olympic Games, despite suffering a dislocated shoulder. Another instance concerns Jigoro Kano’s strength of character. Once, according to a Japanese embassy official who was with him at the time, they were on a coach traveling through mountains in Italy. Their coach was involved in a traffic accident; it left the road and came to rest halfway over a steep cliff. Panic broke out among the passengers, who feared that the coach might fall. The embassy official said that Professor Kano kept his composure. He was well aware that it might go over at any second, but he remained cool. His attitude in the face of potential catastrophe helped restore calm among the other passengers and they all got off the vehicle quietly. A number of Kano’s early students lost their lives in warfare. One in particular who saw military action during both the Sino-Japanese War (1894-1895) and the Russo-Japanese War (1904-1905), was Hirose Takeo. He was commander of the Fukui-Maru and was killed by enemy cannon fire as he desperately made a third heroic attempt to rescue his warrant officer, Sugino, during battle at Port Arthur. He was 57 at the time of death, following which Kano awarded him a posthumous 6th dan judo grade on April 8, 1904.

Some people succumb easily to temptation, the habitual gambler who eventually loses all, and the seasoned alcoholic are, for whatever reason, seemingly bereft of self-discipline. Our judo training, if it has been thorough, should have intensified our willpower. The fully-trained judo man should therefore have enough inner strength to overcome such temptations and be able to keep his desires within sensible bounds. Today we often see judoka acting like footballers and some other sportsmen. They display a lack of self-control when they win; they jump up and down punching the air, while the loser often looks a forlorn, dejected spectacle. They need to show some humility and empathy when they win. Traditionally, at the conclusion of a budo contest, neither winner nor loser showed any emotion. They both accepted the status quo with equanimity. These days it is only Japan’s sumo men who seem to have preserved the budo tradition of stoical calmness and composure at the end of a contest. Thus, the judo instructor, who from his long experience has acquired a measure of self-discipline, sets his students a good example. This should empower students likewise and help them to further their efforts in the pursuit and eventual fulfillment of their own personal goals throughout life.

Looking back at notable courageous events in the 20th century, we see that there were many who were decorated for outstanding gallantry, including those engaged in the conquest of Mount Everest, in single-handed global marine navigation ventures and in polar exploration. But perhaps the most famous individuals of that era were those who bravely pioneered space travel. I am thinking here of the Russians Yuri Gagarin, (1934-1968) and Ms. Valentina Tereshkova born 1937, and Americans John Glenn (1921-2016) and Neil Armstrong (1930-2012). But in my estimation, we should also include the man who took on the might of the British Empire and WON – Mahatma Gandhi (1869-1948). A man of infinite moral courage, he led the Indian independence movement against British rule and eventually achieved independence by employing a strategy of nonviolent civil disobedience. By becoming an exemplar of moral courage, Gandhi’s legacy inspired many others around the globe. Among his most well-known adherents was Dr. Martin Luther King (1929-1968). An American Baptist Minister, King became head of the US Civil Rights Movement and eventually achieved some objectives for the benefit of the African American community.

Finally, we should also not forget the name Malala Yousafzai, born on 12 July 1997 in Mingora, Swat, Pakistan. This young lady, in October 2012, miraculously survived a Taliban gunman’s murder attempt. A well-known activist for human rights, especially so for female education, became at the age of 17, the youngest-ever Nobel Prize laureate. She received this prestigious award for her struggle against the suppression of the right of all children to receive education. Similar to Gandhi, Jigoro Kano and others, her advocacy has become a worldwide movement. These outcomes demonstrate the fact that nonviolent methods, and here I include Jigoro Kano’s efforts in transforming jujutsu into nonviolent judo, can sometimes have a wide-ranging and beneficial influence on society.

Brian Watson - November 24, 2017
We use cookies to ensure that we give you the best experience on our website. If you continue to use this site we will assume that you are happy with it.OkRead more