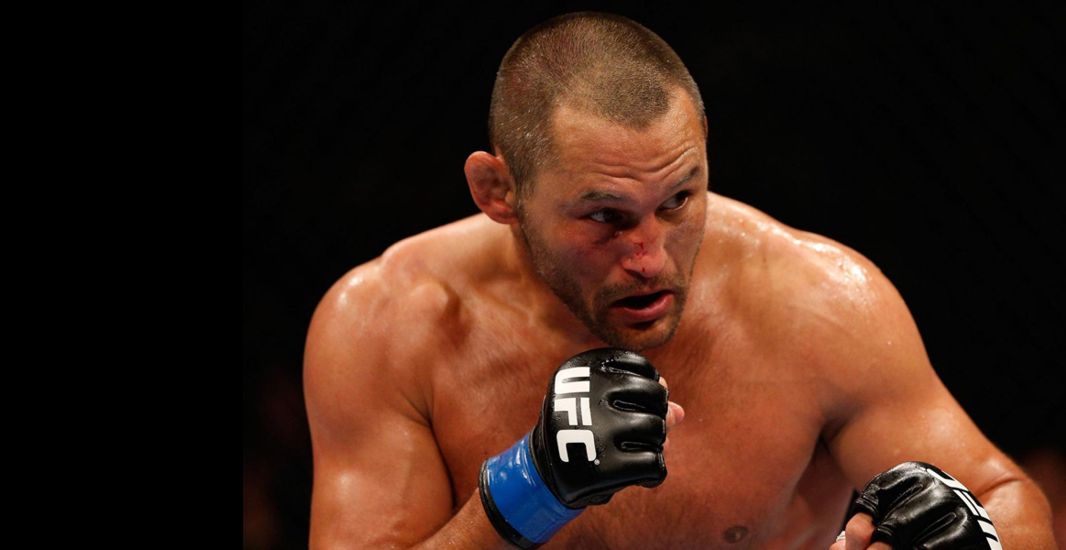 Dan Henderson was born on August 24, 1970 in Downey, California and he grew up in Apple Valley, California. He is an American former mixed martial artist and Olympic wrestler. He last competed as a middleweight in the Ultimate Fighting Championship. He was the last Strikeforce Light Heavyweight Champion and was the last Welterweight and Middleweight champion of Pride Fighting Championships.

Daniel Jeffery Henderson started wrestling at the age of 5, and competed on the 1992 and 1996 U.S. Olympic Greco-Roman wrestling teams.

Dan wrestled at Victor Valley High School with his older brother, Tom, where their team won the California State Wrestling Championship in 1987. Dan placed second overall in California in the 1988 season. Henderson also made an appearance on The King Of Queens.

In his first year of MMA training he won the Brazil Open tournament, and just one year later Henderson entered and won the UFC 17 tournament in 1998, defeating Allan Goes and Carlos Newton. After that, Henderson left the UFC seeking greater financial opportunity in Japan, where he competed in the now defunct Rings and PRIDE Fighting Championships. It was there he won the 1999 Rings – King of Kings tournament. He defeated two opponents in one night to qualify for the finals, and then beating Gilbert Yvel, Antonio Rodrigo Nogueira and Renato “Babulu” Sobral to win the tournament. Until recently, there was no 183-lb. division in PRIDE, so Henderson fought at 205 lbs. and Heavyweight for much of his career, where he competed against some of the best, including Wanderlei Silva. He later called his first fight with Silva the toughest single fight he ever had. He later fought with top fighters such as Antonio Rodrigo Nogueira and Ricardo Arona. When PRIDE began its Bushido shows, bringing in lower weight classes, Henderson fought in and won their first ever 183-lb. Grand Prix, defeating Ryo Chonan and Akihiro Gono by knockout, and then defeating Murilo Bustamante by split decision in the finals. At PRIDE Bushido 10, Henderson defeated Kazuo Misaki by unanimous decision after hurting Misaki with strikes on numerous occasions. Henderson then entered the second ever Pride 185-lb. Grand Prix, where he lost a rematch with Misaki.

Previous to the unification match with Quinton Jackson, his most recent fight was at PRIDE 33 in Las Vegas on February 24, 2007, where he scored an upset by defeating Wanderlei Silva via KO to become Middleweight champion.

Henderson is the second fighter in MMA history to win two world titles in two different weight classes in a major organization (along with former Team Quest stablemate Randy Couture) and is the first fighter to ever hold them simultaneously.

As announced during the broadcast of UFC 71, Henderson would be the next challenger for the UFC Light Heavyweight title against Quinton “Rampage” Jackson. Henderson lost that bout in London, England at UFC 75 via unanimous decision.

As announced during the broadcast of UFC 71, Henderson would be the next challenger for the UFC Light Heavyweight title against Quinton “Rampage” Jackson. Henderson lost that bout in London, England at UFC 75 via unanimous decision.

On November 17, 2007, it was announced during the post fight at UFC 78 that Henderson would fight UFC middleweight champion Anderson Silva to unify the Pride welterweight  and UFC middleweight championships. UFC 82 took place on March 1, 2008 and was held at the Nationwide Arena in Columbus, Ohio. Despite winning the first round, Henderson lost via submission at 4:52 of the second round by rear naked choke.

Dan Henderson came back in the UFC 88 with a victory over Rousimar Palhares, winning by unanimous decision. It was his first win in the UFC in over ten years. After the bout, Henderson laughed and said, “Hopefully I don’t have to wait that long before I get my next win.”

Dan Henderson returned to the light heavyweight division to face former UFC Middleweight champion Rich Franklin on January 17, 2009, at UFC 93 in Dublin, Ireland. Henderson won the fight via a split decision following an eye-poke in the third round that many, including Franklin himself, thought was intentional. He was subsequently selected to lead Team U.S. on season 9 of The Ultimate Fighter, with Michael Bisping coaching the opposing Team UK.

On December 5, 2009, Dan Henderson signed a four-fight, 16-month deal with Strikeforce  after his contract with UFC expired.

Dan Henderson faced Renato Sobral on December 4, 2010 at Strikeforce: Henderson vs. Babalu. Henderson won the fight via KO at 1:53 of the first round.

For a third run in the UFC, Dan Henderson faced Maurício Rua on November 19, 2011 at UFC 139. Henderson won the bout via unanimous decision. The back and forth action earned both fighters Fight of the Night honors, and was described by many as one of the greatest fights in UFC history.

UFC President Dana White announced during the post-fight press conference of UFC 145 that Henderson would be the next opponent for Light Heavyweight Champion Jon Jones, but due to Dan’s knee injury the fight was canceled.

Dan Henderson was able to fight Lyoto Machida on February 23, 2013 at UFC 157. He lost the bout via split decision.

Dan Henderson faced Rashad Evans on June 15, 2013 in the main event at UFC 161. He lost via split decision.

Henderson faced Vitor Belfort in a rematch on November 9, 2013 at UFC Fight Night 32. Henderson defeated Belfort in their first encounter in 2006 at Pride 32 via unanimous decision. He lost the fight via knockout in the first round, marking the first time in his MMA career that he had been stopped due to strikes. The match with Belfort was the last fight of Henderson’s contract with UFC.

On January 22, Henderson revealed to UFC Tonight that he signed a new, six-fight contract with the UFC.

In January 2014, a rematch with Maurício Rua was announced to take place on March 23, 2014 at UFC Fight Night 38.[36] Despite losing the first two rounds after being knocked down by Rua, Henderson rallied back in the third round and won the fight via TKO due to punches. The win also earned Henderson his third Fight of the Night bonus and first Performance of the Night bonus.

Making a quick return to the cage, Henderson faced Daniel Cormier on May 24, 2014 at UFC 173. He lost the fight via submission (technical submission/rear-naked choke) in the third round after being out-wrestled and held down on the bottom for the majority of the fight.

On November 12, 2014, the UFC announced that Henderson would move down to Middleweight to face Gegard Mousasi on January 24, 2015 in the co-main event at UFC on Fox 14.[40] He lost the fight via TKO in the first round.

Henderson faced Tim Boetsch on June 6, 2015 in the main event at UFC Fight Night 68. He won the fight via knockout at 28 seconds of the first round.

Henderson faced Vitor Belfort in a rubber match in the main event at UFC Fight Night 77. He again lost the bout via a combination of head kick and punches.

A rematch with Lyoto Machida was expected to take place at Middleweight on April 16, 2016 at UFC on Fox 19. However, on April 13, the UFC announced that Machida declared the usage of a banned substance during an out-of-competition sample collection last week. Machida stated that he was unaware that the substance was prohibited both in and out of competition. Therefore, he was removed from the bout and Henderson was re-booked for another event at a later date.

Henderson was quickly rescheduled to face Hector Lombard on June 4, 2016 at UFC 199. He won the fight via knockout in the second round via a head kick followed by a reverse elbow and earned himself a Performance of the Night bonus, as well as becoming the first fighter to knock out Lombard cold.

Henderson faced Michael Bisping, the current UFC Middleweight Champion, in a rematch on October 8, 2016 at UFC 204. He lost the back and forth fight via unanimous decision. Both fighters were awarded Fight of the Night for their performance. At the conclusion of the fight, Henderson confirmed his intention to retire from fighting.