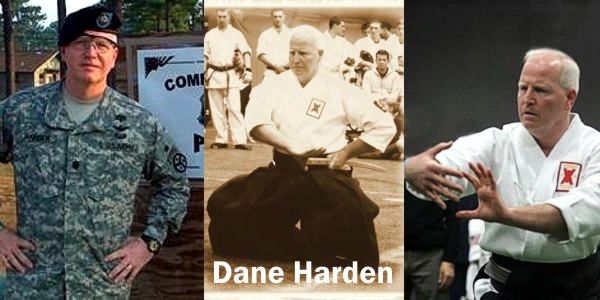 Master Dane S. Harden formed his nearly life-long affiliation with the martial arts when he began studying Aikido in 1969 at the age of ten. He went on to train in Tae Kwon Do with the Jhoon Rhee Institutes in Cumberland, Maryland, until enlisting in the Army in 1976. Over the course of the next forty years he earned Black Belt ranks in Aikido, Isshin Ryu Karate-do, and most notably a Seventh Degree Black Belt in Tae Kwon Do. Additionally, Dane has been awarded the Fuki-Shidoin rank (certified instructor with promotion authority) in Yoshinkan-Aikido under the Chudokai Aikido Federation International and Eighth Degree Black Belt, Kevin Blok Kyoshi. Sensei Blok trained under Gozo Shioda Soke, the Founder of Yoshinkan Aikido. Shioda Soke was a senior student of O’Sensei (Morehei Ueshiba) the founder of modern Aikido. Harden Sensei also studies the Japanese Katana and recently earned a Goshindo Mein Ryu Instructor’s certification under Dana Abbott, Shihan (Black Belt Hall of Fame, Weapons Instructor of the Year). Sensei Harden often works various applications of weaponry, striking arts and control measures into training with his students who benefit from the variety of his skill sets.

Sensei Dane Harden was also an avid tournament competitor on the U.S. National Karate Circuit for over thirty years, frequently winning top positions in forms, fighting, and weapons competitions at state, regional and national levels. Some of his tournament victories include such prestigious events as The Battle of Atlanta, The U.S. Diamond Nationals, and The Battle of Baltimore. He was also an early full-contact proponent and competitor in the Professional Karate Association (PKA) circuit in the 1970’s. Sensei Harden transitioned his focus to teaching and then founded Western Masters Martial Arts, Inc., in 1979. The schools now have locations in Maryland, Virginia, and West Virginia. This year Sensei Harden will celebrate admission into the Martial Art Masters Hall of Fame for his forty-two years as a martial artist, competitor, and teacher. He was nominated for this prestigious honor by Sword Master Shihan Dana Abbott. Additionally, he is active in numerous martial arts groups and organizations including the Chudokai Aikido Federation International, The Joe Lewis Fighting System, U.S.A. Olympic Tae Kwon Do, and the Goshindo Sword and Chanbara Association. Sensei Harden is a published author in several martial arts journal including on AllAboutMartialArts.comUSADOJO, Aikido Journal, and Black Belt Magazine. Sensei Harden also serves on the Seniors Mentors Black Belt Board for the Joe Lewis Fighting System and also was appointed in 2010 to the USADojo.com medical advisory board. He recently completed a highly acclaimed instructional DVD series featured in the February 2009, edition of Black Belt Magazine February. The DVD series is a pivotal work for its quality of instruction and understandable approach to human physiology, martial arts history and culture, training, and tactics and strategies.

Sensei Dane Harden brings a unique view to the martial arts with a history as a professional soldier with twenty-three years of service on active duty and with the Army National Guard. He is Senior Flight Surgeon/APA and a highly decorated combat veteran with several operational deployments to his credit. These include Estonia, Bosnia-Herzegovina, Iraq, Afghanistan, and Hurricane Katrina. His military decorations are to numerous and impressive. He received the very prestigious Order of Military Medical Merit (awarded to less than 10% of career military medicine professionals). He still serves with the Tennessee National Guard as a Lt. Colonel and is a Graduate of the U. S. Army Command and General Staff Officer College and the Army Flight Surgeon Program at Fort Rucker, Alabama. He is also a graduate of SERE, Combat Tactical Medicine, Combatives, Air Assault, Expert Field Medical Badge courses, and holds Physician Assistant Medical Specialization’s in Emergency Medicine and Orthopedics. Sensei Harden’s views and opinions on budo, martial arts, fitness, and psychology in warfare are based on a history of real-world experiences. His approach and philosophy are more than just physical. They tend to be very practical in application.

The educational background of Dane Harden is equally impressive. He holds Bachelor of Science Degrees in Biological Science (B.S.) and Respiratory Therapy (B.S.). He also holds a Master’s Degrees in Medical Science Education (M. Ed.). He graduated from a Johns Hopkins Medical Center affiliated Physician Assistant Program (P.A.) in Baltimore, Maryland in 1993. He is Board Certified in Primary Care Medicine and General Surgery through the NCCPA (PA-C). Also, a Fellow of the Wilderness Medical Society (FAWM) and often lectures on national and international stages. He has presented topics as varied as hyperthermia management, self-defense, improvised medical care in a wilderness setting, and recently lectured at the International Conferences on Wilderness Medicine in Santa Fe, New Mexico and Chamonix, France!

Dane Harden is married to a very supportive and caring wife, Dr. Sherry Harden, who holds a Pharmacy Doctorate and an MBA. Sherry is an avid Aikidoist, Goshindo sword practitioner, and has trained in Tae Kwon Do for more than twenty years. They have one son who is also involved in Tae Kwon Do, Goshindo sword, and Wing Tsun Kung Fu. They all train together regularly and enjoy hiking, climbing, shooting, and white water rafting trips. Sensei Harden and his wife recently completed the challenging “Tour Du Mont Blanc” through the heart of Alps in France, Italy, and Switzerland.

USAdojo - May 29, 2005
We use cookies to ensure that we give you the best experience on our website. If you continue to use this site we will assume that you are happy with it.OkRead more