By Phil Elmore ~ Jailhouse Rock, Comstock, Closing Gates, or 52 Blocks is alleged to be a prison fighting system — a martial art practiced in the penal system of the United States, either developed within its walls or brought to them by unjustly imprisoned descendants of African slaves. The assertion begs the question: Just what is 52 Blocks, and does it really exist? Despite the ardent declarations of those who propagate the myth of Jailhouse Rock, the truth of 52 Blocks lies in an honest examination of human nature in the context of what is realistically feasible and likely.

52 blocks first came to public attention in the late 1990s, thanks to Douglas Century, author of the book Street Kingdom: Five Years Inside the Franklin Avenue Posse. In the book, Century describes his friendship, over the course of a few years, with a former criminal and would-be rap star named Big K. It is in this profanity-laced narrative, in which the identities of those involved are disguised with aliases, that 52 Blocks or “Jailhouse Rock” is described. Century followed this up in August, 2001 with a feature article in Details magazine called Ghetto Blasters: Born in prison, raised in the ‘hood, the deadly art of 52 Blocks is Brooklyn’s baddest secret.

The style was also profiled in the New York Times in July of 2009. The article explains that several instructors have emerged who now publicly teach what author Justin Porter called a “quasi martial art.” Porter charitably allows that, “because 52 Blocks exists practically as an oral tradition, its history is a bit murky.” This is a polite way of saying that no one can or will give you a straight answer or any substantiating evidence of 52 Blocks’ lineage. 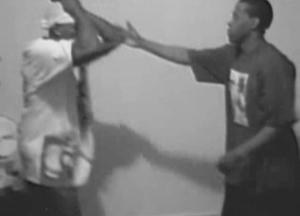 Regardless of these mentions in the media, if any single man could be held responsible for promulgating the popular myth of 52 Blocks or Jailhouse Rock, it would probably be Dennis Newsome. Newsome is notable because he consulted on the mix of fighting styles used by Mel Gibson in the movie Lethal Weapon, some of which supposedly include elements of 52 blocks. 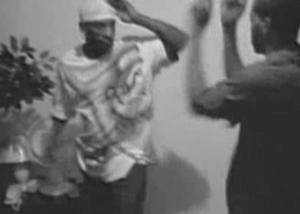 Profiled by the San Diego Tribune in 2004, Newsome was described by staff writer Gil Griffin, quoting martial artist Darrell Sarjeant, as “one of the pioneers of African martial arts.” Newsome, as explained by Griffin, claims his father and grandfather taught him “a type of leg wrestling passed down from African slaves in the Americas.” 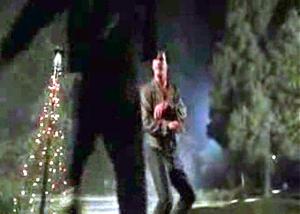 In a series of interview questions and answers reproduced at Stickgrapplers (to whom we are grateful for the considerable research done on 52 Blocks, which made compiling this report considerably easier), Newsome claimed that 52 Blocks or Jailhouse rock originated in Africa and possibly comes from the same parent art as capoeria. 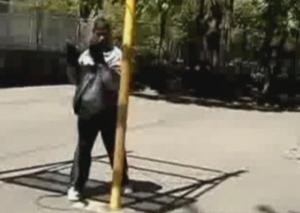 As the story goes, when evil whites began jailing freed black slaves as a form of racial persecution, inmates who knew this martial art passed it on to others, and as they did so the martial art evolved.

According to Newsome, Jailhouse Rock comprises multiple styles developed in different places and under different conditions, and thus each of these incorporate different techniques. These techniques range from striking to wrestling, using the hands, elbows, knees, head butts, and some low kicks. Practitioners of Jailhouse Rock supposedly learn in-depth knowledge of pressure points and vital striking areas, as well as foot sweeps and “Gangsta Locks” (which Newsome equates to trapping such as in Wing Chun or Jeet Kune Do).

According to Newsome, 52 Blocks or Jailhouse Rock is an underground system. Unless you go to jail, hang out in underground fighting circles, or are family to an ex con, you’ll never learn it — and if you are white guy, nobody will teach it to you. As Newsome’s interviewer, identified only as “Dempsy,” wrote, “the art is the art of the African who needs it for survival. Much like the Asians decades ago, who would not teach outside their race, the analogy is that you do not give your enemy your best weapon.” In other words, Jailhouse Rock is a racist, racially determined system, in which all of you who are white and NOT in prison are the enemy.

This would be offensive if not for the fact that the system simply doesn’t exist. To believe that it does we have to believe a series of increasingly unlikely propositions: First, we are asked to believe that a people sold into slavery and shipped across the ocean to serve as slaves in the United States somehow managed to transmit the coherent body of a complex, technically diverse martial arts system to their children, their children’s children, and their children for generations, all under the watchful eye of slave owners who would not be eager to have their property learning to fight. There are those who would have you believe that these offensive and defensive moves were disguised as dance… but while this might be believed of flowing, rhythmic styles like capoeira, it is far less likely that Jailhouse Rock’s progenitors could have so disguised this system of fighting.

Second, we are told we must accept the notion that entire systems of fighting — not one, not some, but many — are being transmitted and taught from inmate to inmate in an extensive web of prison instruction despite the fact that such activities would surely be discouraged by prison officials. Yes, we do have grainy footage of inmates teaching their fellow felons sloppy martial arts moves or other criminal methods, such as during time in prison yards… but these isolated incidents are a far cry from the fully realized, technically complex instruction we are asked to believe is taking place. Violence does occur in prison, yes… but it takes only moments to stab or rape a fellow prisoner. It takes considerably more time to impart the details of an intricate martial art system to another person and especially to successive generations of other persons… all while in the strictly controlled environment of the penal system.

For that matter, if the system is so varied, so different, so determined by context, then there is no system at all — just a loose collection of technically diverse underground martial arts that have nothing to tie them together except that they are alleged to be practiced in prisons and by ex-cons.

So what prompts those who claim to have seen, to know, or even to teach 52 Blocks to further this myth? Fighters like Mike Tyson and Kimbo Slice have been alleged to know it and to have exhibited it; UFC fighter Rashad Evans has called it “dirty boxing” taken to the next level; various rappers have cited it in their lyrics; there is no shortage of people, such as on YouTube who are only too eager to describe their own experiences with it, even going so far as to demonstrate techniques.

The single biggest component of this drive to lay claim to 52 Blocks is that people think its cool. This is a function of popular culture. For years, Hollywood has fed us a steady diet of movies that glorify and horrify prison life. To study, or even to have seen, a “prison fighting style” is to mint your own street cred, cementing your place among incarcerated, penal-system hardened badasses. Urban culture glorifies thuggery and criminality, upholding it as glamorous and a shortcut to wealth and power. This alone is enough to spur people to get in on the shared delusion of Jailhouse Rock.

Then, too, there are those eager to lay claim to a cultural history of some distinction. Just as there are those who try and fail to link contemporary urban culture to the ancient society of Egypt, asserting that an African martial art has survived and been disseminated in America’s prisons fulfills the same need to identify cultural significance and differentiate it from Western culture.

The heaviest irony here is that all of these people claiming to have seen or to teach a fictitious African martial art have, in effect, caused it to exist. Remember the martial art of Hikuta? Coincidentally marketed as the fighting style of the ancient Egyptian Pharaohs’ bodyguards, Hikuta was invented in the 1990s by a man named Lee Crull. A few years later, Crull has passed away, and two of his students continue to each the Hikuta system. A style that never really existed has become a second-generation fighting system which, if its practitioners continue to certify succeeding instructors, will have come into being from nothing… all because one wheezing old man thought it would be fun to say so.

Likewise, regardless of the true provenance of the techniques they teach as 52 Blocks or Jailhouse Rock, those instructors claiming to impart it to their racially pure student bodies or to and from their fellow felons and ex-convicts have created a self-fulfilling prophesy. The fiction of Jailhouse Rock is now realized as a living, breathing style because there are people who say so… regardless of the truth. In so doing, they’ve breathed life into the lie of 52 Blocks… and helped further the popular culture imagery associated with street criminals and thugs, for good or for ill.

About the Author
Phil Elmore is a martial artist and freelance author living in Central New York State. The publisher of The Martialist: The Magazine For Those Who Fight Unfairly, he has spent the last twenty years studying martial arts and self-defense.