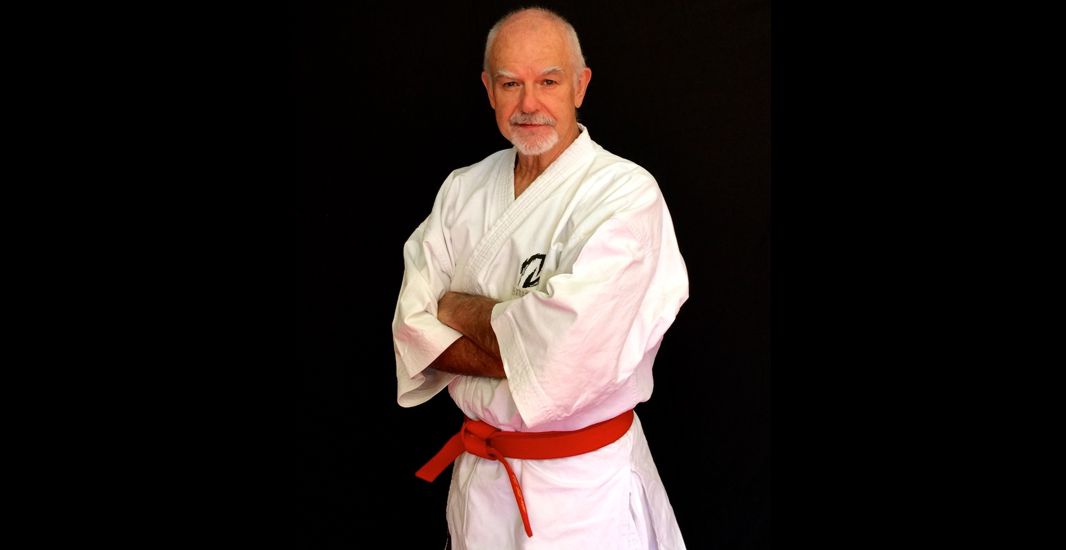 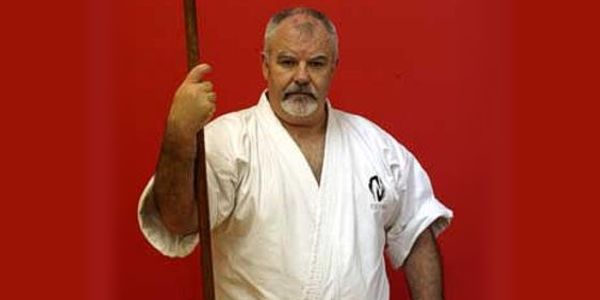 Hanshi, is a 5th generation student of Uchinadi with an impeccable lineage of Okinawan instructors, starting with his teacher Kinjo Hiroshi and his teacher’s teacher, Hanashiro Chomo, Itosu Ankoh who preceded him, and his master, Matsumura Sokon, —historically the tradition’s most visible pioneer. A Canadian-born Australian migrant, McCarthy has studied the art of karate since childhood, and enjoyed an outstanding competitive background before embarking upon a lengthy journey as a field-researcher in Japan, where he ultimately resurfaced as a best-selling author.

As someone who has made unraveling the mysteries of karate his life’s work, Patrick McCarthy believes that Tigwa evolved as a multi-faceted synthesis of no less than four individual disciplines, but was ultimately simplified into a more pragmatic discipline of percussive impact to serve as a vehicle promoting physical fitness and social conformity. 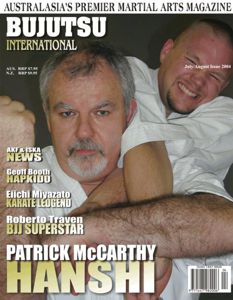 Karate has, in many ways, became a microcosm of the austere society in which it was forged, particularly due to its transformation into a recreational activity during a period of radical military escalation and profoundly influenced by Japanese Budo culture. Karate flourished as a ritualized and rule-bound practice in pre-war Japan, ascending to the apex of popularity in a University environment. Foreign interest in budo gradually increased during Japan’s post-war period until it became firmly entrenched in Western culture by the 1960’s.

A product of this extended legacy, it was during that period of popularization in the 1960’s that Patrick McCarthy started learning karate but after years of study he ultimately became dissatisfied with impractical application practices, and the convoluted teaching standards of 3K-training. In particular, he often questioned the value of teaching learners to respond to reverse punches, back fists and sidekicks when it is clearly not representative of violent encounters? More importantly, if karate was just about punching and kicking, as was pontificated from the highest sources, he speculated as to the need for kata in the first place. With kata containing myriad techniques, other than just punching and kicking, he couldn’t help but ponder what tactical intentions their creators originally set forth. Challenging the historical evolution and pedagogical veracity of this heritage has resulted in McCarthy Hanshi becoming an excellent educator and inspirational bujin.

“In 1985, after nearly twenty years of training, I became discouraged by incongruous practices. It wasn’t that I disliked traditional karate but I could no longer accept its modern interpretation of kata! I began to search for a teacher, a style, or even an organization that could mentor me in a more rational, coherent and systematized manner. Specifically, I was looking for someone who could;

#1.Use realistic acts of physical violence as a contextual premise from which to learn [rather than the 3K rule-bound reverse punch scenarios]
#2. Employ practical two-person drills to recreate those realistic acts of physical violence found in today’s society and provide prescribed defensive templates ultimately leading to functional proficiency
#3. Show how the prescribed templates [i.e. the composites which make up kata] not only culminated the lessons already imparted but, when linked together, clearly offered something greater than the sum total of their individual parts [i.e. kata], and finally
#4. To possess the ability to clearly demonstrate where these prescribed templates [mnemonic mechanisms] existed in the classical/ancestral-based kata and how they were linked back to both generic and specific acts of physical violence.
While there was certainly no shortage of excellent yudansha everywhere I looked during my decade in Japan, I found no trace of such teachings anywhere there, Okinawa or beyond! Hence, I was compelled to make my own deductions, which gradually resulted in the establishment of the HAPV-theory [Habitual Acts of Physical Violence] and two-person drill concepts which ultimately lead to the development of Koryu Uchinadi Kenpo-jutsu.” 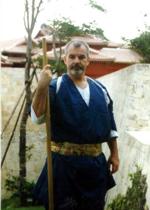 Residing and studying in Japan for many years, his field research took him to Korea, Taiwan, Southeast Asia, and China where he came into contact with many of the most senior authorities of various martial art traditions. Such studies not only improved his skill and understanding but also resulted in the publication of several important literary contributions along with a brilliant thesis he called the Habitual Acts of Physical Violence (HAPV) theory. Having walked in the footsteps of those who pioneered modern karate, McCarthy’s progressive efforts were recognised in Japan. In fact, his teaching credentials come from the very same source, as did those of Funakoshi, Miyagi, Mabuni, Ohtsuka, Konishi, Sakagami, Yamaguchi, and Nagamine, to name a few of the most well-known luminaries.

Systematizing the collective results of his field studies into a cohesive body of teaching practices, McCarthy Sensei has recently pioneered a new and highly functional interpretation of kata without losing any of its fundamental structure or cultural significance. A progressive traditionalist who believes that kata are the original time capsules of karate; his formula is attracting remarkable attention in a tradition normally dominated by large Japanese groups and their associated international sporting bodies.

A recognized trailblazer in the application practices of traditional kata, McCarthy Hanshi has been invited to teach his theories in more than twenty countries around the world including, Canada, the USA, Venezuela, Trinidad, Ireland, Scotland, England, Holland, Belgium, Germany, Austria, Norway, Sweden, Finland, Denmark, Russia, Israel, South Africa, Kenya, Japan, Australia, and New Zealand. The extent of his knowledge, quality of instruction, open-minded approach to teaching, and willingness to share, have all contributed to why this non-Japanese master-level instructor has become one of the most sought after teachers of traditional karate anywhere in the world today. When speaking about kata and application practices few instructors of traditional karate are better qualified to learn from than McCarthy Sensei.

Reverse Engineering – “We cannot solve our problems with the same level of thinking that created them.” (Albert Einstein)

Both Okinawan and Japanese masters have maintained that kata is the soul of Karatedo, and yet, in spite of this ubiquitous testimony, its original defensive intentions remain ambiguous and convoluted. Having made an art of extrapolation and reverse engineering McCarthy Hanshi has long employed these autodidactic techniques in conjunction with his HAPV-theory to discover how the underlying ideas and principles that govern application principles of kata work. In the book, “Karate Masters”, Nishiyama Hidetaka said, “Later on the student must connect the principle to the application. The old masters experienced these applications. Therefore, the practitioner has to study the outside form first, then understand the principle, and later connect the principle to the actual application.” An exhaustive study of karate’s early historical and technical publications, comparative analysis of style-curricula, the disassembly of traditional kata and linking them to the HAPV have become the benchmark practices through which McCarthy Hanshi has effectively reconstructed the tactical concepts of kata.

Ritualized model responses culminated in kata concern two principal issues, seizing and impacting, or combinations thereof. Excluding weapons, being struck from behind, and attacked by several opponents, physical confrontation can be catalogued into individual and collective study/learning modules. Although there will always be variables unique to every encounter, the commonalities can be categorized into , physical techniques have to do with seizing or impacting. Techniques of percussive impact include punching, kicking, elbowing, kneeing, striking, stomping, butting, and bumping. Seizing techniques include throwing, restraining, pressing, choking, wrestling, and the grabbing of an opponent to augment the effectiveness of impact trauma. 1988 McCarthy shootfighting at Tokyo’s Korakuen Hall Patrick McCarthy’s far-reaching study has not only catalogued these obvious, but all too often overlooked truths, he has also discovered their connection to kata and systematized them into simple learning modules. The informal presentation, below, outlines the substance and process of the seminars he teaches.

Patrick McCarthy has authored or translated the following books:

USAdojo - October 10, 2000
We use cookies to ensure that we give you the best experience on our website. If you continue to use this site we will assume that you are happy with it.OkRead more