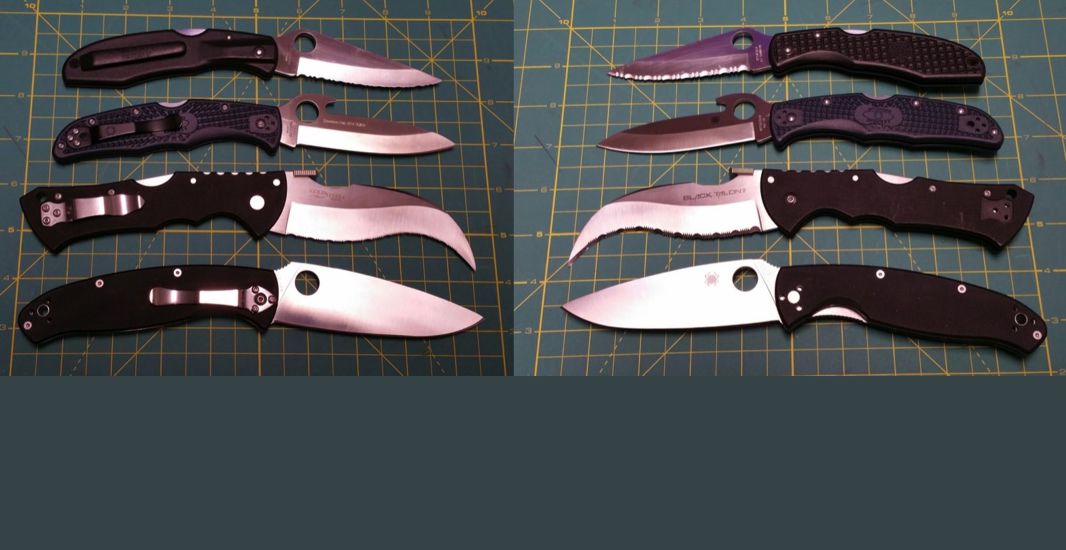 In this article Bill McGrath discusses some of the every day carry women’s self defense knives he has chosen for his wife to carry for daily use as well as her protection. His recommendation are based on his 40+ years teaching Filipino martial arts.

These are recommended every day carry women’s self defense knives:

Knife 1. This is an original Spyderco Endura. On a Saturday afternoon in August of 1994 my wife used this pocket knife to save herself from an abduction and assault by two men in a Home Depot parking lot in the normally quiet town of Wappingers Falls, NY.

When they tried to grab her, she was able to quickly draw and open the knife due to the pocket clip and thumb hole of her Spyderco. She then yelled “Back off!” while displaying the blade in a defensive stance. The sight of the knife and her attitude convinced them they had picked the wrong woman to attack and they ran back to their vehicle and raced away.

Knife 2 is a new model Endura with the steel clip and the Emerson “Wave” feature. I gave this to my wife after the plastic clip on her old Endura became loose and would not hold the knife securely in her pocket.

Knife 3. This is the Cold Steel Black Talon II. I brought it for my wife as a possible “intimidator” knife; i.e. a knife to keep bad guys at bay. Here’s my thinking on this knife and its specific purpose.

Most men who would prey upon women are cowards. Show them a big, scary knife as well as the will to use it and they will back off. The Talon’s hooked blade makes it both scary looking and an effective counter to the technique most male criminals use to begin an attack on a female victim; the grab, (their intent being to grab the woman and take her out of public view where their more serious crimes will occur).

When bad guys choose a woman to attack, they often do a “shark bump” first; i.e. a physical or verbal test to learn if their target is dangerous or not. For example, the two men who tried to abduct my wife began by asking her if she wanted to go to a party as they approached her in the parking lot. It was after asking her twice while continuing to follow her and getting two negative replies from my wife that they tried to cut her off from her car and said “You’re coming with us” while reaching out to grab her. That’s when she drew her knife and shouted at them.

Fortunately, they took off. But, if they had tried to grab her and she was carrying the Talon, the hooked blade would have cut through the muscle and tendons of their hands or forearms, leaving them without a functional grip and with ribbons of useless flesh where their limb had been.

I chose this knife believing that the odds were good that any would-be attacker would know with one glance how much damage this knife can do and would take off the moment the blade was shown. (This is also what commonly happens in most self defense uses of firearms by civilians: they draw their weapon and the bad guy runs off without the civilian having to fire a shot).

Unfortunately, New York State does not see the merits of this type of knife as a self defense tool and considers it a “dangerous knife.” Yes, any knife can be dangerous, but in NY State law, a “dangerous knife” is one that does not have a “legitimate” sport or work purpose. (Under NY State law, self-defense is not a legitimate reason to carry an otherwise prohibited weapon). Ironically, it is a fairly straightforward process in my area for a civilian to apply for a full carry permit for a handgun. Even one that is designed, not for sport, but for “self-defense” purposes only.

However, you can’t get a carry permit for a self-defense knife in my state.

This is not the case in some states though, as there are states in the U.S. that issue something called a “dangerous weapons” permit, with which you can carry a variety of weapons other than a handgun. This used to be the case in my neighboring state of Connecticut, where one of my students applied for the carry of a collapsible baton. At the time, he worked for a large pharmaceutical company, making deliveries of samples to doctor’s offices. This meant he was a constant target for drug addicts during his workday. Being a kind hearted person, he wanted a non-lethal means of self defense, and being a Pekiti-Tirsia student, chose an ASP collapsible baton as his tool for this. Unfortunately, Connecticut was just in the process of dropping its dangerous weapons permit option from their permit system and he did not get to carry his baton. The local politician he spoke to about this said that he would have no problem getting a full carry permit for a handgun though. So he was left with a firearm as his only force option, should he be accosted by a junky intent on robbing him, (and no, just giving them what they want is no guarantee of safety with a strung out junkie who will often get homicidal if he thinks you are holding out on him and attack you whether you give him what he wants or not). “What about pepper spray?” you ask. Well, when police officers go through training with the product the instructors always add the disclaimer that the spray may not be effective on “emotionally disturbed persons or those on drugs or alcohol.”

While a civilian in New York would have a difficult time justifying the carrying of the Cold Steel Talon, other states have more cut and dried rules, so the Talon with its 4 inch blade and single edge may be fine elsewhere.

Knife 4. This is the Spyderco Resilience. I purchased this for my wife after realizing that she couldn’t carry the Cold Steel Talon. I wanted a blade that was larger and more visible to a potential attacker than the Endura, while still fitting into the category of a normal “sporting” or “work” knife (it really excels in those roles; especially for the price when compared with higher end options).

You may also find the article on my own EDC knives to be helpful to you: Tuhon Bill’s 2018 Every Day Carry Knives. That article goes into a few details on knife laws that I didn’t go into here, so it would be a wise move for you to read that as well.

A final thought before you go.

When a politician says that you have the right to self-defense, but will not allow you the tools needed to defend yourself, what they are really saying is that only large, strong, fit and well trained young men have a right to self defense; and only then against a single, unarmed opponent of equal size and abilities.

What these politicians are really saying is that women, the elderly and people with disabilities really don’t have a right to self-defense in the real world.

Why are these politicians like this? They see a people totally dependent on them for everything, including personal safety, as the ultimate in job security. If we loose some innocent people along the way, so be it. These politicians still get to keep their jobs.

In the U.S. we can fight this by joining organizations like the NRA and the American Knife and Tool Institute and by voting for those in favor of term limits on members of Congress.

A Gun Alone Is Not Self Defense