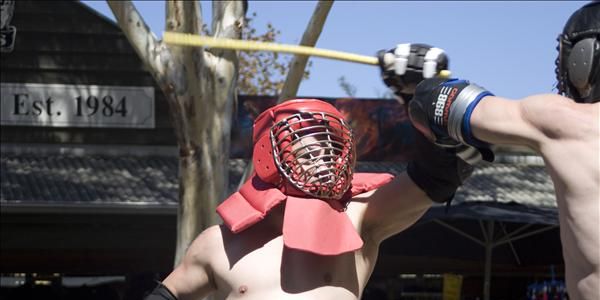 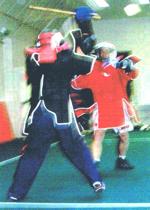 Filipino Full Contact Stickfighting is an exciting martial art and sport where two superb Eskramadors /Arnisadors square off to battle with one or two rattan sticks in their hands.

This type of martial art/sport really tests the individual player physically, mentally and technically, because of the pain factor, the speed of the sticks, and because of the way that the mind must be geared in order to get through one of these enduring encounters.

This type of martial art/sport takes the body and mind to the limits of human endurance, with a great deal of emphasis on conditioning, fitness, skill, speed and lots of techniques. 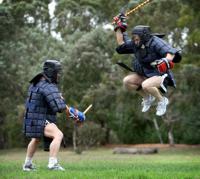 But while Filipino Full Contact Stickfighting is a brutal competitive sport, it is truly also an effective method of self defence, especially when attacked by more than one assailant, or when an attacker has a knife, this then makes the rattan stick a very convincing equaliser in this type of self defence situation.

Stickfighters are some of the toughest athletes in the world, and with this type of trained toughness, it helps them to be prepared for the chaotic violence of a street fight, where they might have to deal with more than one person attacking them in a real street fight situation. 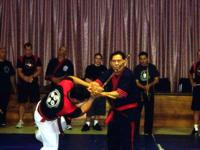 When it comes to real self defence, a person should learn how to kick effectively, so as to keep an attacker away at long range, then the puching techniques from boxing are a must in every combat martial artist’s arsenal of technique, because these weapons are great at medium range, also to incorporate the knees and elbows of Thai Boxing are great self defence tools at close range. 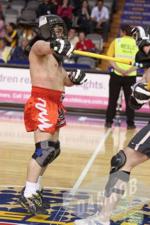 Any skills from Judo/Jujitsu, Aikido, Hapkido, BJJ and Wrestling are a must for the grappling range of combat, whether it be in a stand up situation, or on the ground, a basic knowledge of this zone in a combat senario is a real necessity today.

When there is more than one attacker coming at you on the street, take my word of advice, use the knowledge and skill learned from eskrima/kali/arnis training, because the stick is a real equaliser, especially in the way it shatters bone when it comes into contact with the human body. 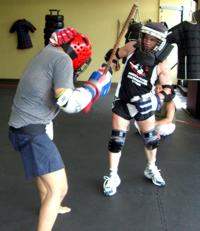 An honest stickfighter will always accept the challenge of a good bout, and he will fine tune his art and skills so that they are ready when ever he/she may need them, whether it be in a martial art, sport or self defence situation.

The only thing that should be expected, is the worst, especially for an unsuspecting attacker on the street, because the Filipino Full Contact Stickfighting is an effective method of fighting in a street encounter against one or more attackers.

The Filipino Full Contact Stickfighting teaches a person exactly how to block, strike, lock, throw and grapple with the use of a rattan cane, and it demonstrates how this weapon is very effective against kicks, punches, knees, elbows and also against other hand held weapons such as knives, iron bar, or a broken bottle. 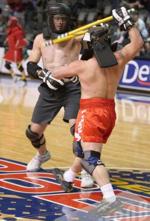 The stick is very rapid, and it can make 4-5 strikes in a second to different parts of the body, when an expert stickfighter uses the the weapon against an attacker on the street, or in a competition.

The combination of rapid strikes to any areas of the bodies vital area’s, can mean instant injury or even death to an attacker, especially when the stickfighter has been truthful and honest in his/her approach to training and preparation for a fight or self defence scenario, and in this type of really disciplined training, it will make the Filipino Full Contact Stickfighter very tough. 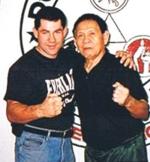