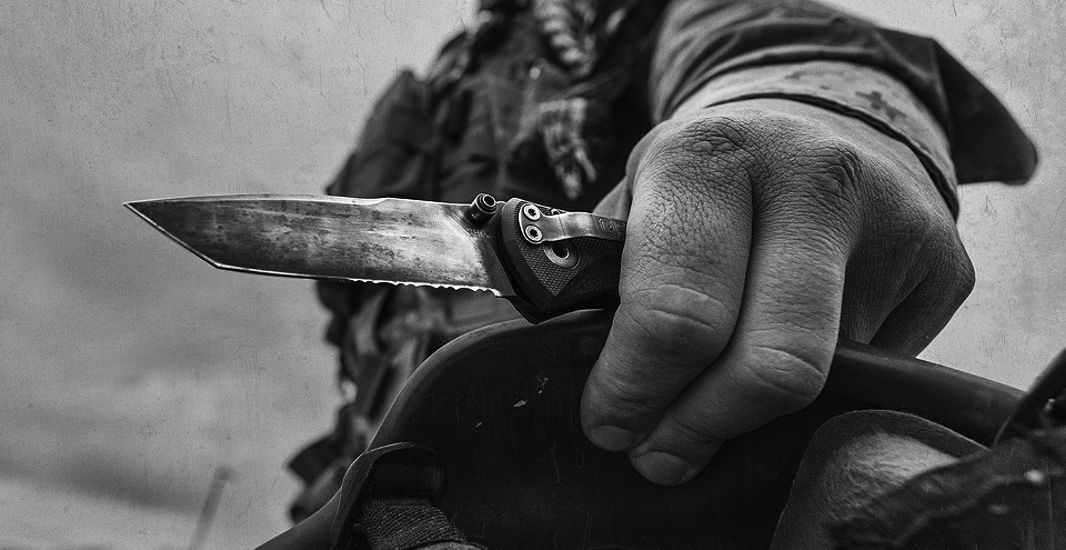 Recently, I spent two days in a fantastic class learning the less than sophisticated art of using a “tactical” folding knife in a potentially lethal manner in defense of myself or others. Yes, I said, “less than sophisticated art.” Knife fighting, like all other martial art disciplines, is a fine art and takes years of training and practice before one even comes close to mastering it. What I learned in two days was enough knowledge and skill that now I consider myself adequately versed in the art of using a folding knife for defense purposes.

I walked into the class as a certified defensive tactics and officer survival instructor, convinced that I knew something about knife fighting. In reality, what I knew was how I’d been taught to defend against an edged weapon attack, and how I’d taught other officers to defend themselves from the same type of attack. I went into the class ignorant of knife fighting as an art and sure that I was going to learn all about it. I came out of the class, two days later, able to deploy the folding knife in my pocket as a potential lethal force tool and aware that I was ignorant of knife fighting as an art.

The reason I have this awareness of my lack of knowledge is because a boisterous instructor, named Michael deBethencourt, spent the two days ranting like a lunatic about knives, knife fighters (or “knifers” as he refers to them) and deploying knives for defense.

To give you a rough idea of Mr. deBethencourt’s knowledge and experience base: He has over ten years of experience working as a knife/counterknife specialist; has enjoyed more than 23 years of martial arts training/practice; has been a police defensive tactics instructor for more than thirteen years; and has been a published author on the topic of edged weapon usage for a ten year span. Teaching an average of at least eight classes each month, and taking every class he can find each year, he continuously increases his knowledge of edged weapons, all of the arts that are built around them, and how segments of these arts can be applied to police defensive tactics.

During the first morning of the class, Mr. deBethencourt reviewed the requirements which must exist in circumstances surrounding the deployment of lethal force. Just to be sure, Michael required each student instructor to SAY the requirements, WRITE the requirements, and READ the requirements out loud to the rest of the class. That completed, he started our education on knives by teaching us the correct nomenclature and explained why he felt the folding knife was more desirable than a straight or fixed blade.

All explanations completed, deBethencourt then began with basic skills, such as drawing and opening the knife to secure it in the three grips he supports in his training. Bearing in mind that most police officers rarely practice what they are taught, deBethencourt keeps his training simple to the extreme. There are only three grips taught in the class and only three targets taught in the class. Throughout the two days of training, the large majority of which is spent on practical exercise, my fellow student instructors and I repeatedly attacked each other and defended ourselves from the attack (deploying training knives in that defense). All of us strongly agreed, as we fulfilled the “attacker” role, that the defense used would surely have stopped us and was a quick way of ending our aggressive actions.

With the basic skills of drawing the knife, securing it in the proper grip, and deploying it as a defensive tool practiced to comfort (though not to perfection), deBethencourt expanded on the training to demonstrate how smoothly his techniques blend into our other defensive tactics techniques. DeBethencourt displayed how easy it was to use the knife as a weapon retention and disarming tool. He showed us ways in which it could be deployed silently, without that nice audible “click” most folding knives make when they open. He gave us examples of how to use the knife to de-escalate situations under some circumstances. As one of the more interesting parts of the class, deBethencourt talked honestly with us about department politics and what types of arguments we could expect to face when approaching our administrators with the idea of authorizing a folding knife as a lethal force option.
On an equally serious note, some of the most important education I’ve received about lethal force was the direct result of this class. For years, I believed that the knife could be deployed, in a justified manner, to wound someone as a weapon retention technique.

DeBethencourt is very clear about this: The knife is a lethal force tool. “Cutting someone a little” is akin to “shooting someone a little”. When you pull out that knife as a lethal force option, the same requirements and restrictions that pertain to the use of your firearm also apply. Don’t misunderstand me: while the knife can certainly be used as a rescue tool, to spread peanut butter, or to cut that barricade tape at the length you need, when you deploy it in a conflict, it represents deadly force and you have to make sure you are acting within your department’s guidelines for use of deadly force.

As to which knife, or knives, deBethencourt prefers, he is very articulate about his preference for Spyderco knives – especially the pink handled Delica model. Michael was detailed in his explanation about why police officers don’t need a folding knife with a blade longer than 2 ½”. Further, he explained why he preferred a straight edge over a serrated one. This came down to ease of maintenance, cutting performance and community/court perception. Let’s be honest: Which of the two blades would a jury find more menacing – the pink handled 2.5” straight edge Spyderco Michael advocates, or the 3 7/8” half serrated, half straight, recurved edge of the black handled Emerson Commander? Does this mean the Emerson Commander is a bad knife? Absolutely not. I happen to love mine and it is in my pocket every day. Can I take it with me into a courthouse or on a plane? Absolutely not. However, those are two places that Michael habitually takes his non-offensive, pink handled, “girly” looking knife.

As a final knife carrying point, Michael was adamant about not carrying our knives clipped to our pockets like most of us do. To be honest, it’s damned uncomfortable to carry my Commander IN my pocket as opposed to clipped TO my pocket. It’s just too big and this would defeat the entire purpose of the handy auto opening feature that is activated as you pull the clipped knife from your pocket. The other side of that is this: Michael’s pink Spyderco Delica is not uncomfortable at all in his pocket, or pockets (when he carries more than one), and if he sees a situation escalating to a point where he might need that knife, it is an innocuous movement that clips the blade to a more easily accessible position on his pocket. If the situation de-escalates after that, the reverse move, just as unnoticeably, puts the knife back into hiding.

As with all good training courses, this one made the necessary legal statements about not carrying knives unless you know the laws of the area in which you intend to carry. We were also given sound advice about carefully checking legal definitions of such things as “concealed deadly weapon” and “pocketknife”. Knowing that the class is about using a deadly weapon to deploy lethal force, and being aware that even the training knives are made from plastic, aluminum or steel, we were exceptionally careful during the course of instruction.
I look forward to the day when Michael comes back to my area for another class because one of his policies is that you only pay for training once. He leaves an open invitation to all students to reattend training, free of charge, and that is truly unique. If you get the chance, take this class. If you don’t, ask your department to send someone else. If you carry a knife, on or off duty, make sure you can document some type of training in its use. This was some of the best and I highly recommend it.

For more information on deBethencourt’s tactical folding knife programs you can call Snub Training at 978-667-5591, or you can find out about this same training as offered through the SIG Sauer Academy, by calling them at 603-610-3000.

Unarmed Against a Bladed Weapon