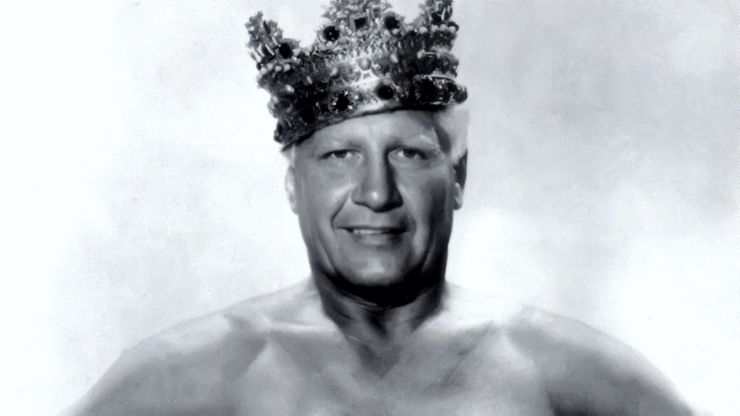 Freddie Blassie was born Frederick Kenneth Blassie on February 8, 1918 in St. Louis, Missouri. He was nicknamed “Classy” Freddie Blassie and he was an American professional wrestler and manager. Renowned as “The Fashion Plate of Professional Wrestling” He was also a one-time NWA Georgia Heavyweight Champion and a one-time NWA Florida Heavyweight Champion.

Freddie Blassie began boxing at Seward Community Center and he won the heavyweight championship. However, he was more interested in wrestling and he would sneak into wrestling matches whenever he could. He would often go to matches at Harry Cook’s Gym and as the wrestlers began to recognize him, they would teach him a hold now and then. Wanting to impress a girl he brought to a show, he accepted his first match, a shoot fight match. Iwasn’t long before he began to get regular work wrestling at local carnivals. His cousin John Frank Holaus would often referee his matches.

Blassie came up with his famous “pencil-neck geek” catchphrase early in his career when he describe a fellow carnival performer known as “The Geek”, who bit the heads off chickens and snakes. According to Blassie, this geek had a neck like a stack of dimes and was a real “pencil-neck geek”.

Soon Freddie Blassie was able to get work from more established promoters like Tom Packs in St. Louis and George Simpson in Kansas City. The more he worked in the business, the more veterans of the business were willing to let him learn more about the business of wrestling.

After the US entered World War II, Blassie enlisted in the Navy and served in the Pacific Theater for 42 months. He achieved the rank of Petty Officer Second Class before he was discharged.

When Freddie Blassie returned from the war, he was billed as “Sailor” Fred Blassie hoping to capitalize on the wave of war-time patriotism sweeping the country, but the gimmick wasn’t unsuccessful. Freddie then went to work for Jack Pfefer, who employed people who looked like sideshow freaks at his shows, including wrestler Tor Johnson. During this time, Freddie Blassie went to New York City to work for promoter Jess McMahon.

World Wrestling Association (1952–1953)
Freddie Blassie moved to Los Angeles in 1952 to work for Jules Strongbow. He loved California and returned there to wrestle throughout his career. Freddie teamed with Billy McDaniel as the McDaniel Brothers, but in the east they were known as the Blassie Brothers.

Georgia (1953–1960)
In 1953, Freddie worked in the Atlanta, territory for Paul Jones (the wrestler of the 1930s). While there, he won the NWA Georgia Southern Heavyweight Championship, the holder of which was generally first in line to challenge the NWA World Heavyweight Champion whenever he passed through the territory. It was also during this period of his career when he dropped his babyface gimmick and became a full-fledged heel. The fans consistently booed him because he was considered a “Yankee”. He also choose to bleach his hair like Gorgeous George, Johnny Valentine, and “Nature Boy” Buddy Rogers. Freddie Blassie earned another nickname, “The Vampire” during this period because he would bite his opponents and would often file his teeth while he was being interviewed or when doing promotions.

Return to WWA (1960–1968)
Freddie Blassie returned to Strongbow’s promotion in Los Angeles in 1960 and he was a big star for the World Wrestling Association (WWA) of southern California. He was so hated there that he needed uniformed police offers to protect him, but he was still a big draw that brought fans to the Olympic Auditorium in Los Angeles. His feuds against such stars as The Destroyer had him wrestling in main level events.

It was on June 12, 1961, that Blassie defeated the “Flying Frenchman” Édouard Carpentier in a best-of-three-falls match. This was his first WWA Championship title. On July 7, he would successfully defended this title against the former NWA Heavyweight Champion Lou Thesz. It was during that same title reign, in a match against Lord James Blears that a “fan” threw acid on Freddie’s back, and Freddie had to quickly return to the locker room to wash the acid off.

Regis Philbin had a late-night weekend talk show in San Diego, and Freddie Blassie would routinely show up to yell at the audience, throw furniture, and threaten Philbin. In later years, Blassie also appeared on The Mike Douglas Show when Philbin was a guest host.

Blassie returned to the WWA in 1968 just as promoter Mike LeBell decided to rejoin the NWA. In the early 1970s, Freddie Blassie “turned face”, and became a good guy again. While with the NWA, Freddie feuded with Soulman Rocky Johnson, The Sheik, and “The Golden Greek” John Tolos. One of his most famous feuds took place in southern California in 1971, against John Tolos. The final match of their series took place in the Los Angeles Memorial Coliseum, and set new California records for both attendance and gate.

Japan (1962–1968)
In 1962, Freddie Blassie had a feud with Japanese wrestling icon Rikidōzan that established Blassie’s reputation in Japan. After Blassie lost the WWA World Heavyweight Championship to Rikidōzan in Los Angeles, the two had a rematch on live Japanese television. Many of the viewers were horrified by Freddie Blassie’s treatment of their hero and Blassie’s gimmick of filing his teeth and drawing blood from Rikidōzan by biting his forehead caused Japanese viewers to have heart attacks, some reportedly even died.

World Wide Wrestling Federation (1964; 1971)
In 1964, Freddie Blassie feuded with Bruno Sammartino and Bobo Brazil. Blassie came into the WWWF with his own world title belt, claiming to be the Pacific World Champion, and was coming to Sammartino’s “back yard” to unify the world title. The series began at Roosevelt Stadium, Jersey City, New Jersey in 1964, with Blassie winning on a technicality, but not a pin. The rematches were held at Madison Square Garden in New York, with Bruno Sammartino winning. Behind the scenes, Blassie befriended Gorilla Monsoon. He returned to the company in 1971 to challenge Pedro Morales for the WWWF Championship. During this stint with the company, Blassie was managed by his future nemesis, “Captain” Lou Albano.

Management Career (1974–1986)
Freddie Blassie retired from active wrestling in 1974, due to a California law that prohibited anyone over 55 from getting a wrestling license. Afterwards he became a manager in the World Wide Wrestling Federation (WWWF) and its subsequent incarnation the World Wrestling Federation (WWF). He performed for that promotion until his full retirement from professional wrestling in 1986.[2] Blassie, Lou Albano, and The Grand Wizard were named “The Three Wise Men of the East”, as the top three heel managers in the company.

One of Blassie’s most famous proteges was The Iron Sheik. Blassie led Shiek to the WWF World Heavyweight Championship over Bob Backlund on December 26, 1983 in Madison Square Garden. After Sheik lost the belt to Blassie’s former managed wrestler Hulk Hogan, Blassie managed Sheik in various rematches around the country throughout the first half of 1984, culminating into another major televised rematch on December 28, 1984 once again in Madison Square Garden. In this match Hogan was once again victorious. After managing Sheik through a brief feud with Andre the Giant, he also became the manager of Nikolai Volkoff, with Sheik and Volkoff later becoming a tag team. Blassie would gain even more gold when Volkoff and Sheik defeated The US Express for the WWF Tag Team Championship at the first ever Wrestlemania. Blassie got involved when he threw his cane into the ring, with Sheik and Volkoff using it to their advantage to gain the victory. When Gene Okerlund confronted Blassie in an interview after the match, Blassie went, “what cane, I didn’t have no cane!”

Blassie would continue to manage Sheik and Volkoff even after they lost the tag team titles. In the Summer of 1985 Blassie would start up a house show feud with former friend Lou Albano, culminating into a few matches, including a steel cage match at the Meadowlands in July 1985. Other than these handful of matches, Blassie mostly stayed out of the ring, sticking to managing from ringside. Blassie unsuccessfully campaigned along with the other managers to manage “Macho Man” Randy Savage when Savage first entered the WWF in June 1985. Blassie would continue to interfere from ringside in matches, especially during Volkoff’s feud with Corporal Kirchner. Blassie’s interference at Wrestlemania 2 cost Volkoff his match with Kirchner, when the cane was grabbed by Kirchner instead of Volkoff.

In the Summer of 1986, Blassie started to slowly phase himself out of the WWF and into retirement. On an episode of WWF Championship Wrestling, Blassie barged into the announcer booth to proclaim that he had sold half of the contracts of Sheik and Volkoff to a mysterious benefactor for a large sum of money. This benefactor was later revealed to be Slick. Blassie appeared alongside with Slick to co-manage Sheik and Volkoff for a few television appearances before finally bowing out in November 1986, with Albano, the final member of the Three Wise Men, retiring a few weeks later.

Because of his close relationship with Vince McMahon, Sr. and his family, Blassie remained on the WWF roster until the day he died. He would sporadically return to make brief appearances following his retirement in 1986, mostly in produced video packages hyping the “new generation” of wrestling. He was given a commentary tryout in 1986 and 1987 for WWF Wrestling Challenge, calling a few matches with Gorilla Monsoon. He briefly turned face in 1989, making an appearance on Prime Time Wrestling angry with Bobby Heenan over money Heenan hadn’t paid him back. Then he returned again in 1990 briefly to do color commentary for Prime Time in April with Vince McMahon, as an emergency fill-in after Tony Schiavone quit, playing a heel once again.

Guest appearances and Death
Freddie Blassie was inducted into the WWF Hall of Fame in 1994. In 2000 he made an appearance at the Royal Rumble as a judge in the Miss Rumble 2000 Swimsuit contest. In 2001, Blassie appeared in a special Raw is War segment for the Invasion storyline, wherein he exhorts a gathering of WWF wrestlers to stand tall against The Alliance – and later gets mocked by Alliance leaders Shane and Stephanie McMahon (because of this, Blassie is the only man to have worked with all 4 McMahon family promoters). Freddie Blassie also appeared in a segment at the Vengeance pay-per-view event in December 2001, where an “undisputed” champion would be crowned. His final wrestling appearance was May 12, 2003 in Philadelphia on Monday Night Raw, three weeks before his death. The segment featured Blassie, his wife, and Raw GM Eric Bischoff, who was about to allow 3 Minute Warning to attack him, until Austin and the Dudley Boyz stepped in. His final words on WWE television were “D-Von, Get the table”, to a monstrous applause.

Friddie Blassie wrote a book called Listen You Pencil Neck Geeks, which was released on May 13, 2003.

USAdojo - August 18, 2008
We use cookies to ensure that we give you the best experience on our website. If you continue to use this site we will assume that you are happy with it.OkRead more