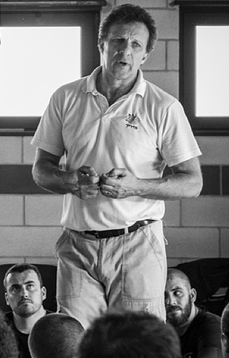 Gabriel Schain, known as Gabi Shai, is a retired officer of the Israeli Security Agency (SHABAK), B.Ed in Physical Education by the Academic College in Wingate. He is a Krav-Maga Expert, who possesses a broad educational and operational experience in the various branches of the security, Counter-terrorism and crime prevention.

The professional work of Gabi Shai is dedicated to the education of his students/trainees, regardless of their functions and characteristics. From youth at risk, through IDF special units, up to governmental security services, intelligence and counter-intelligence agents and officers he trains them all.

In recent decades Gabi Shai continues his educational vision by adapting the principles of Operational Krav Maga, whose development dates back to the early 80s. He continues to implement Krav Maga into the civilian world in his attempt to contribute in improving the quality of life of citizens. This is not an easy task, but it continues to be carried out successfully by OKM international representatives and instructors.

1972 – Immigrated (made Alia) from Argentina to Israel.

1976 – 1977: Israeli Sport Authority (in Wingate Institute) as Main Instructor and coordinator for a General Sports Instructors Course. Krav-Maga was one of the subjects, Imi was the instructor and I had the honor to be Imi’s assistance during the entire year.

1983 – 1988: Director of the Krav-Maga department at the Israeli General Security Services.

1986: Bed in physical education (Wingate Institute). Teacher of the Krav-Maga continuing education program for Physical Education teachers at Wingate institute (one day a week with special authorization from the Israeli MOD).

Through the years worked at the General Security Services training Kram-Maga people from all over the world. At this time, the Krav-Maga technique was well known on all continents.

From 1992 until the present Gabi Shai continued training in Krav-Maga and continue training people from many countries including the United States.

ISCA Academy Director, Gabi Shai still trains people from many countries, with the specific technique of Operational Krav-Maga with specific adaptations for air marshals, VIP protection units and others.