All I can remember wanting when I was a kid was to face the day ahead and see my way through it. Early one Sunday I woke up and wandered into the next room and by some magical process known only to seven year old’s I was dressed by the time I reached the front door. My father was asleep in the bed that slides into the wall of this one room apartment in Los Angeles. It was 1948 and a couple years ago my mother took my two sisters, climbed out the back window in the middle of the night and left me with my dad. For the better part of two years my father paid people, long term baby sitters, to have me live with them and I never saw him unless I was being kicked out of that house or was being kicked out of school. But now, he’s planning to marry the lady in the back upstairs apartment and wanting to appear to be the father he isn’t so he’s having me live with him.

I opened the door very slow and slipped out into a quiet, bright sunny morning. There was nothing I had to do; no place I had to be, I had absolutely no restrictions on my life. There was no plan, no reason, nothing premeditated in the least for leaving the apartment. My dad and the lady from upstairs were asleep and I quietly left and went outside. There was no purpose for any direction I took other than to be outside, so I could see if anything else was awake in the world. I intended to do as I always do and merely expose myself to the world and respond to whatever it did to me. But first, I sat on the back steps for awhile before deciding to walk around the block. I went down the long driveway between our apartment and the filling station next door and turned onto the wide street in front.

The sun had just risen and was casting long shadows on the sidewalk in front of the stores that were closed at this time on a Sunday morning. Everything outside the shadows was a bright yellowish glow and you might as well have been looking into the sun as to be looking at the reflection on the sidewalk. My eyes burnt and it was hard to keep them open but I shaded my eyes with my hand and walked to the corner where a white line in the shape of a rectangle was painted on the street between the curb and two sets of steel tracks embedded in the street, one set of tracks on each side of the center line of Venice Blvd.

The parallel set of tracks on my side of the street came together at a point on the horizon where a tiny object was moving in my direction. It grew larger the closer it came to where I stood, inside that rectangle of white lines painted on the pavement. I can imagine, now, that my heart must have been racing to watch this streetcar grow larger as it approached. I didn’t know why I was standing in this rectangular area reserved for those planning to board the streetcar. I didn’t know exactly what I was going to do but I had the strongest urge to do it, whatever it was, and so I stayed right where I stood. 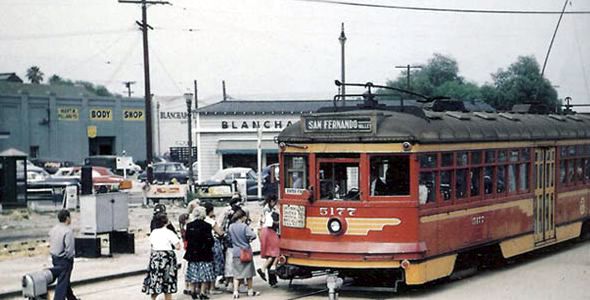 There was no door that opened or closed. There were just three steps that led up to the conductor and the glass encased apparatus that took the tokens. The conductor looked at me as if expecting me to climb aboard and I looked at him with no clue of what to do. Finally, he turned forward and clanged that familiar streetcar sound and started moving away and then I realized what I needed to do, and why I was standing there. And so, just before the rear of the streetcar passed me I reached out and touched the side of the moving streetcar and then took off running as if I had broken the law and the conductor would stop the streetcar and come after me, and have me arrested for my wild, mischievous act.

That was my first adventure in life … I had the strongest urge to touch a moving streetcar every time I saw one pass, and that morning, I did it. There were many adventures to follow. Some were as simple as this and many others… not so. One day I wished for more out of life than a superficial adventure and wondered how that could be achieved. I spent a great deal of time dreaming of things to come.

(there’s so much that could fill this space with sadness laughter love and tears… but, not today)

Now, no longer 7 years old, I’m in my latter years, well into my 70’s. Touching a moving streetcar no longer calls to me. I believe I’ve allowed many of my dreams to move aside. I’ve even reached a time in my life when I have become more tempted to abandon the pursuit of my dreams. When I think of putting money aside or investing my time to study and prepare myself for the future I realize the future has already come and, in more ways than I care to remember, it has already gone.

When I try to determine how to get the most out of what I have left, something reminds me that I’m just waiting for that “knock on the door” and my call to begin my exit is too close to be seriously concerned with what I plan to do in the ‘future’. To be perfectly frank, I’m afraid of how I will feel the moment I know for certain what precious little time I have left. But once I hear the news for sure, I don’t believe I’ll be afraid of dying. Because, I’m already afraid just to think I might be afraid. You see I don’t like fear and so once I see clearly what the “handwriting on the wall” holds for me, I will be a relieved. (Isn’t it “not knowing” that we fear the most?)

The fear isn’t the actual pain, or suffering of death, it’s more the fear of slipping off into the abyss of oblivion… I fear not being ready to be forgotten. Have I done all that is important to do? Can I be certain that my living touched on the actual purpose for my being here, and if it has, was I aware of it at the time? When I hear that first shoe hit the floor above will I be ready for “the other shoe” to fall.

I woke up this morning remembering what the phrase, “the other shoe” meant and that I actually experienced its meaning. It was a popular statement at one time. When I was five years old I went with my dad as he traveled door to door and did his work as a  Portrait Photographer taking baby pictures in people’s homes. In the summer he would leave me at a pool for the day and in the winter he would leave me in a theatre. There was always some place he would be able to leave me as he went to various homes taking home portraits. But at night we would have a flea bag one room hotel with bare walls. We heard the people walking around upstairs and the talking came from both sides and above and so we passed the time some nights trying to tell where the talking came from. Sometimes, my dad would get frustrated and yell back a response to what they were discussing. But what I remember most was when the talking died down and there was just a shuffle here and a squeak over there and then a ‘thud’, a shoe hit the floor and my dad would say, “Good he’s going to bed”… and then we waited  because we knew a second ‘thud’ was coming and when it did… we were able to go to sleep.

Waiting for “the other shoe” to fall was filled with dead time. We weren’t awake, we weren’t asleep, we were just waiting… waiting for something outside our self to say “Ok continue with what you were doing”.

I sometimes feel as though I’m still waiting for the other shoe to drop and then like today I remember that waiting, like this, is dead time. You don’t care if you pay a bill or not, you don’t even care if you do your business, or start a new relationship, or go to a movie or walk in the park… why do any of that when you’re just waiting for the other shoe to drop. Maybe we can’t put it into words but when we’re just not as passionate about life as we once were… when every smile you share with friends or family is plastic… when you close up and no longer venture out into the very world you spent a lifetime building, that’s a mild depression because you’re waiting for the other shoe to drop. When you think you’ve already done the best you can do in your life and you lose your zest for doing any more… you’re not losing interest in ‘doing any more’ you losing interest in doing the same thing over and over, again.

Move on to a new project, a new interest, a new hope and keep on living.

Don’t measure what you think you gave life by what you think life has given you, if you do and you feel shorted in any way, you need a new calculator. I recently started going to bed at 11pm and I can’t sleep past 5am. I just lay there and toss and turn and no matter how I try, I can’t go back to sleep. Something has been getting me excited enough to get up and live. And so, now, I’m going to get out there for a morning run and see what it is. Don’t listen for the “thud” of a shoe dropping… it just might be the sound of a door closing to a life of worry, disappointment and lost opportunities.

“Do not merely listen to the word, and so deceive yourselves. Do what it says”. James 1:22

You Are You And You Always Were You!