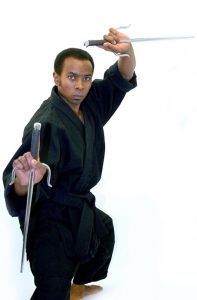 Gregory Duncan, who is a son of legendary martial arts pioneer, Professor Ronald Duncan Sr. Professor Duncan was the first martial artist to introduce Ninjutsu to the American martial arts community, and he is the founder of Way of the Winds Martial Arts System. Gregory has been involved, and exposed to various disciplines of the martial studies since childhood, and he has over 40 years of experience in the arts. He has attained a great deal of proficiency in his martial studies of Jujutsu, Taijutsu, Ninjutsu and Kobujutsu. Gregory, like his father, also has great proficiency in the weapon arts of Kobujutsu and modern day weaponry, which has garnered him national acclaim.

Known for his precise and practical concepts of self defense, Gregory Duncan continues to broaden his approach to his Martial Arts training – while at the same time respecting the deep traditions that sustains his system.

About Way of the Winds Martial Arts System

Gregory Duncan owns Duncan Martial Arts where he teaches his Way of the Winds martial arts system. Way of the Winds is a comprehensive system of self defense which concepts comprise of Jujutsu/Taijutsu, (a Japanese term for “body skill” or “body art”). The techniques rely on the essence of body movements for unarmed defensive tactics – such as; joint locking and throws, evasive movements and striking patterns. Kubujutsu (traditional weaponry) is also included in this martial arts system of study.

To contact Gregory Duncan and Duncan Martial Arts please visit their listing on the Martial Arts Schools and Businesses Directory by clicking on the badge on the left.